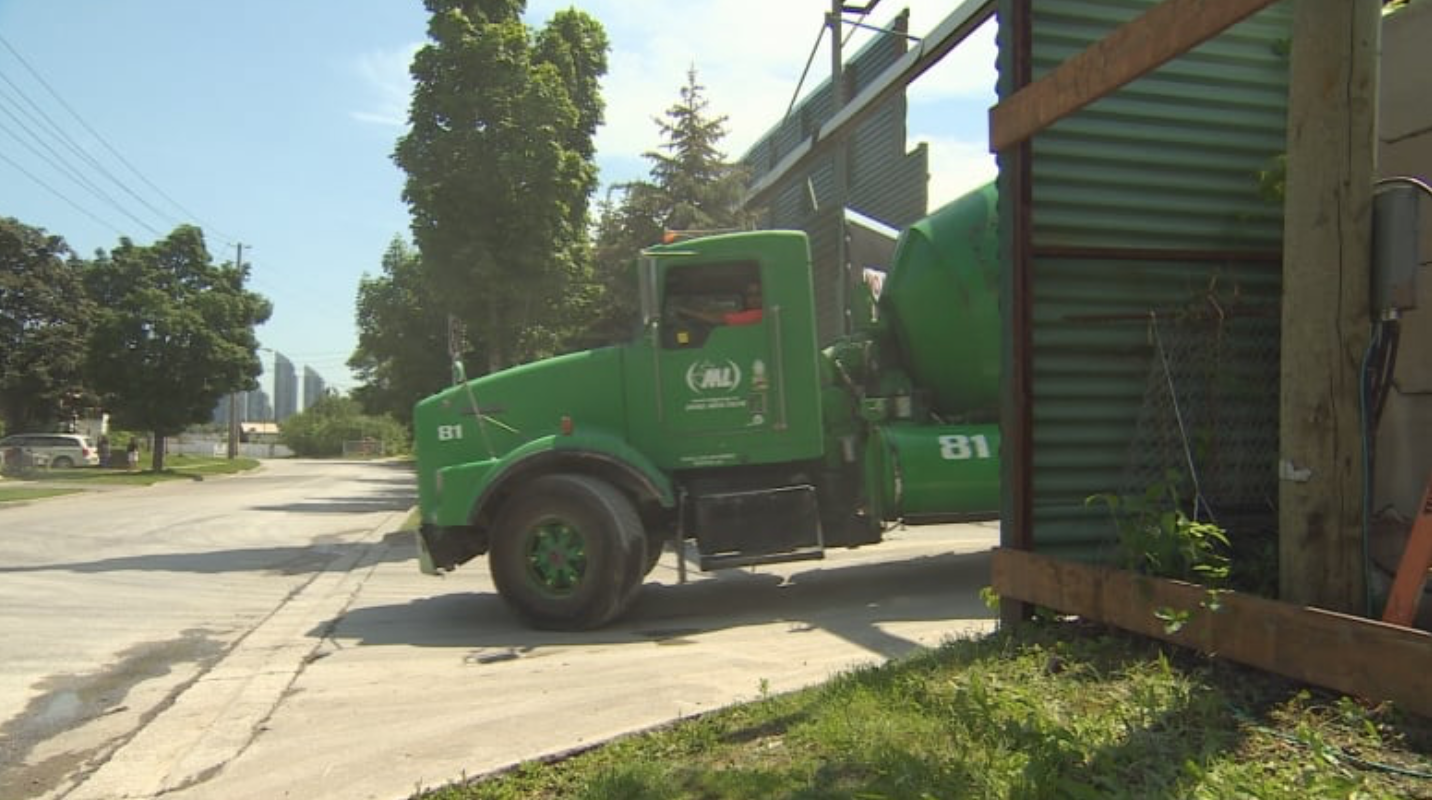 Residents near the concrete plant have complained about truck traffic and excessive noise for more than a decade. (CBC)

Nearly a year ago, council voted to buy and potentially relocate a controversial Mimico concrete plant — but the deal still isn't finalized, vexing both residents and the plant's owners.

For more than a decade, community members near the ML Ready Mix plant at 29 Judson St. have raised concerns about truck traffic, excessive noise, and messy conditions around the site.

Council voted to use $5 million in city funds to buy the property in July 2018, with the goal of moving the operations to the Port Lands.

At the time, the area's councillor, Mark Grimes, told CBC Toronto he was hoping to "relocate ML out of our community as soon as possible" by getting the necessary approvals in place.

But there still hasn't been a sale.

"We don't see any hope of this [company] moving," lamented Dan Irwin, a community member who has been leading the charge to have ML Ready Mix shut down.

A wall around the site is currently collapsing and dirty water is seeping out into the residential neighbourhood, he said.

Neighbours have previously complained about high levels of truck traffic as well, counting close to 400 trucks coming and going each day.

In 2016, the company was also fined $160,000 by the province for various Environmental Protection Act violations and "discharging a contaminant."

She agreed moving the Judson Street site elsewhere is the right call. "I don't think they should be close to residential areas at all," she said.

"This place is incompatible," Irwin echoed. "It should never have been there."

Speaking by phone to CBC Toronto, a spokesperson for the plant's family-owned parent company said the operation is "not aware" of any present-day concerns from the community.

"We are compliant with all the legislation," said Rene Silva, operations manager for ML Group.

The company is also trying to expedite the council-backed sale, he said, with negotiations still ongoing.

"We are actively, as we always have been, looking for alternative sites, and we are exercising all of our efforts to come to a fair agreement between ourselves and the city," Silva continued.

"I wish it was sooner than later ... unfortunately, I'm at the mercy of the system itself; the bureaucracy."

Grimes did not respond to CBC Toronto's request for comment.

City spokesperson Bruce Hawkins, however, said the city is working diligently to finalize the transaction in the "near future" and move the plant's operations to 545 Commissioners St. in the Port Lands.

It's been a "long and complex" negotiation process, he added, and the city now hopes buying the site will allow 29 Judson St. to be repurposed down the line and reduce the current issues faced by community members.

The area's MPP, Christine Hogarth, said her office has only heard one or two concerns from residents about the plant and its trucks.

"However, this is an important issue for the community that needs to be solved — the sooner, the better," she said in a statement, adding she fully supports the city moving the plant to a non-residential area.

But with the months ticking by, Irwin said it's concerning that council voted to spend millions to purchase the site with no results to show for it yet.