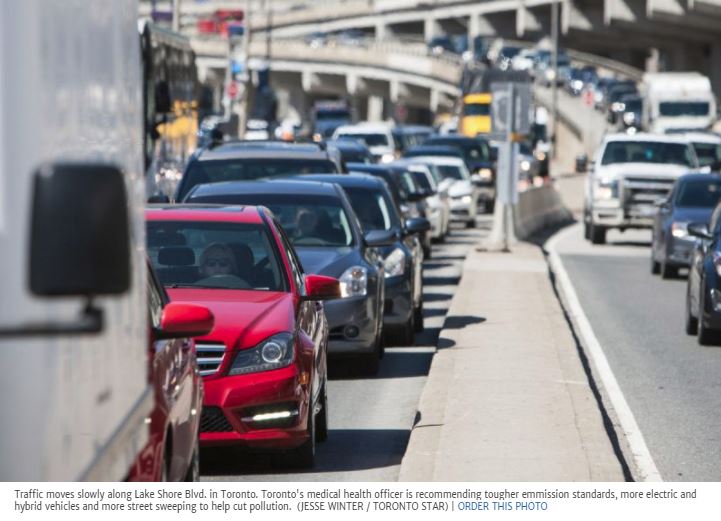 That is one of the conclusions of a new report by Toronto’s medical officer of health focused on dirty air caused mostly by vehicles and taking the biggest toll on people who live close to highways and other busy roads.

“However, Toronto Public Health estimates that air pollution still contributes to 1,300 premature deaths and 3,550 hospitalizations in Toronto each year. Motor vehicle traffic is the largest source of air pollution emitted in Toronto . . .

“Studies show that people living close to roads are more likely to experience adverse health outcomes including breathing problems, heart disease, cancer, and premature death,” she wrote, adding that the most susceptible are children, seniors and people already sick.

Public health has noted before that health problems caused by air pollution are down from the days of coal-fired power and frequent smog warnings in Ontario, but progress has stalled and the main reason is our reliance on vehicles burning fossil fuels.

“Traffic-related air pollution” is a mix of airborne particulate matter, nitrogen oxides such as nitric oxide and nitrogen dioxide, carbon monoxide, and volatile organic carbons. While tailpipes spew the most pollution, a significant portion of harmful particles come from wear and tear on asphalt, tires, brake discs and brake pads.

There are life-saving solutions, de Villa, notes, but they require action by all governments, in terms of regulations and shifting consumer vehicle choice, and from Toronto taxpayers investing significant dollars in the city’s ambitious plan to fight climate change.

Recommended changes to reduce Toronto air pollution and save lives include:

Toronto council unanimously endorsed TransformTO in July. A fight looms for the 2018 budget, however, because Mayor John Tory says the emission-fighting steps must be prioritized while Councillor Gord Perks says the plan is already prioritized and should be fully funded.

On street sweeping, the city is launching an air quality study in 2018 with an eye to reviewing possible changes to sweeping schedules.

Last February, while finalizing Toronto’s 2018 spending plan, the Tory administration had proposed cutting $2 million from the street-sweeping budget. After councillors unexpectedly rejected the cut, they had to tap a reserve fund to balance the budget.

“The report suggests ways to reduce exposure to pollution out there and to reduce pollution itself,” he said in an interview.

“The city needs to make it as easy as possible for people to keep their cars at home. It’s not about saying ‘You can’t ever drive’ – it’s about saying when you are going to the grocery store or work, there are transit, cycling and walking options. The best way to reduce air pollution is by not turning on that engine in the first place.”

Toronto’s health board will debate the report on Monday.