Details still not ironed out as producers set to take responsibility for recycling.

Ontario's plan to make product producers responsible for the province's recycling program appears to have hit a snag.

After announcing the overhaul nearly two years ago, stakeholders are still waiting for the final version of rules that will govern both what Ontarians can throw in their recycling bins — and who will pay to take care of it.

The plan is to move from a system where product producers and municipalities roughly split the cost of recycling programs to something called extended producer responsibility (EPR.)

With EPR, producers take on the full financial and operational responsibility for where the packaging they sell to Ontarians ends up.

A draft of the legislation was released this past fall, with the province's environment minister telling municipal officials the final regulation would be ready in mid-February. It has yet to be revealed.

Now, several deadlines have been missed, said Peter Hargreave, a consultant who has been working with the Association of Municipalities Ontario (AMO) on the file.

"What that does is creates issues for a whole bunch of players," he said. "The sector has, in a way, been on hold for a good two-year time period."

Officials with the Ministry of the Environment said work on that changeover is continuing, but gave no firm timeline for the release of the final version.

"The ministry is working on finalizing the Blue Box Regulation and continues to consider all stakeholders' feedback to ensure the Blue Box Program is affordable for consumers and producers, and right for municipalities and Indigenous communities," it said in an emailed statement.

'A lot of disagreement'

Calvin Lakhan, a York University researcher who has represented some product producers in negotiations around the legislation, said there's "still a lot of disagreement" about what the final regulation should look like.

One source of concern, he said, is the plan to expand the materials allowed in Ontario recycling bins.

"Now [producers] feel as if it's a bait and switch, that the province and municipalities are saying, 'Hey, while you're at it, can you pay an additional 70 to 90 million dollars for these proposed amendments to the regulation.'"

Lakhan isn't paid by any product producers, but said his research at York has shown that a full-on switch to EPR will come with some unintended consequences, including producers passing on their new costs to consumers.

Another issue, he said, is the inability of the province's recycling infrastructure to process the kind of waste Ontarians are producing.

Municipalities gearing up for switch

Advocates for EPR counter that many product producers are in favour of the change — and are pushing the province to get on with it.

"I know that there are some producers and companies that are completely prepared to do their part," said Emily Alfred, waste campaigner with the Toronto Environmental Alliance.

Alfred said the longer the regulation takes, the longer Ontario will be stuck with a system in which less and less is being recycled due to increasingly complicated plastic packaging — and in which producers have no incentive to fix the problem. 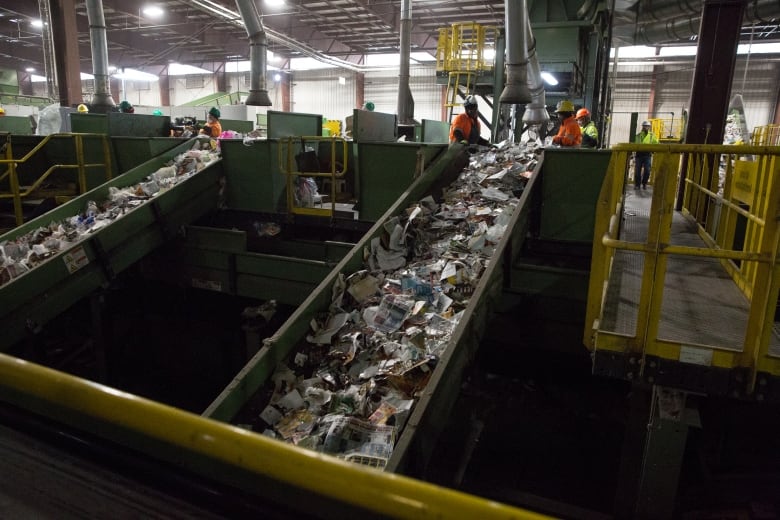 'We have a government that has the power to hold companies responsible to change their packaging so that they don't use those lightweight, complicated packages that aren't recyclable,' says Emily Alfred. (David Donnelly/CBC)

"Any delay is really kind of worrisome because it's just going to keep pushing this further and further away. And our Blue box really needs fixing right now," she said.

Alfred said she's also frustrated by the lack of clarity around the delay, saying that whatever meetings the province has been having are "behind closed doors, with companies."

"Environmental decision making in Ontario is not being done with environmental groups or with the public."

To get the issue back on the agenda, the Ontario Waste Management Association launched a campaign online urging people to write their MPPs.

In Toronto, Matt Keliher, the general manager of solid waste management services, urged the province to release the final regulations soon so municipalities can begin planning.

"Transitioning to EPR will be a complex task for municipalities and is one that many have already started to plan and prepare for by aligning contracts based on the proposed timelines," Keliher said in an email.

In a letter sent to the Toronto Star last week, AMO president Graydon Smith also stressed that municipalities are already making "significant changes and amending contracts" to prepare for the change.

"Ontario's provincial government has done the difficult work and forged consensus with municipalities and industry," he wrote.

"Municipalities and responsible industry partners are eager to get the job done."

This article was reposted from CBC News: https://www.cbc.ca/news/canada/toronto/ontario-s-plan-to-overhaul-blue-box-program-stalls-leaving-sector-on-hold-1.6020672. This article first appeared in the CBC News, on May 11, 2021.