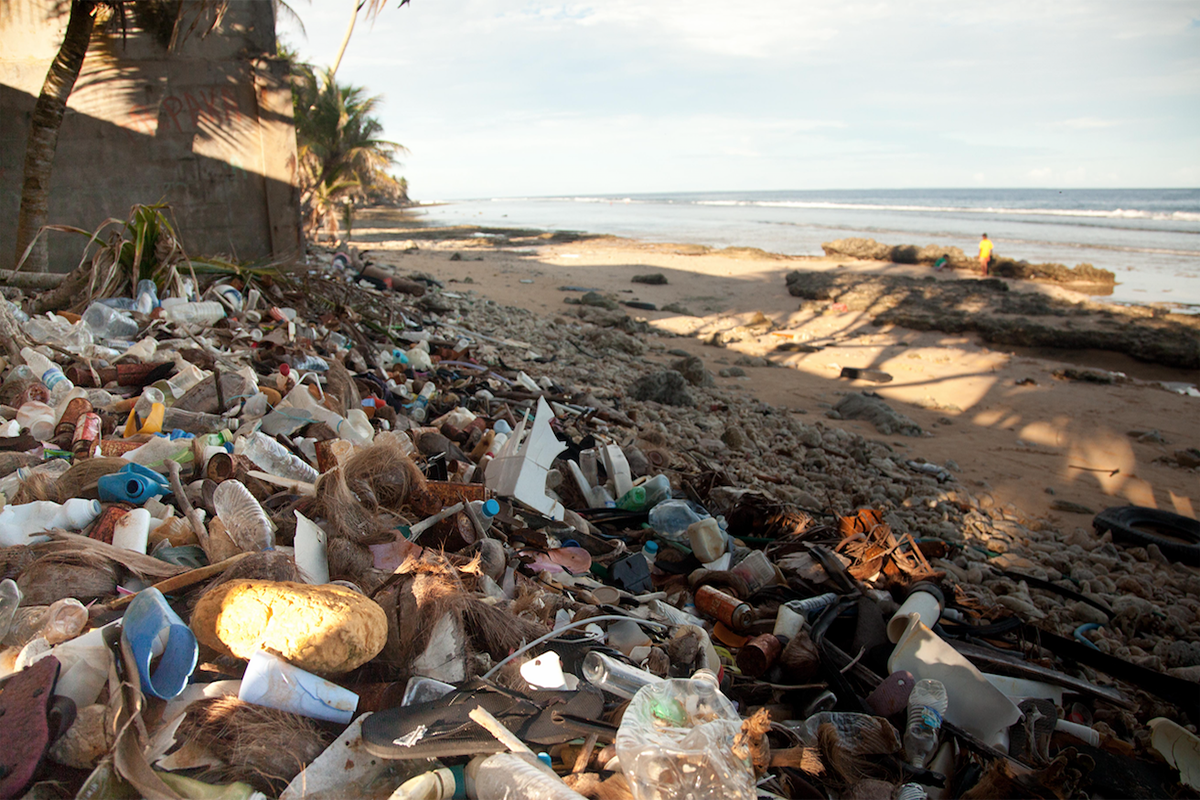 Avoiding unnecessary plastic is not just hard, it’s nearly impossible. Bags, take-out food containers and other single-use plastic items spill out of our recycling bins and litter our neighbourhoods. Now we have more data than ever on how plastics are killing our oceans.

You might want to sit down for this: the equivalent of one garbage truck of plastic enters our oceans every minute. Mistaking it for food, one in three sea turtles, some 90 per cent of seabirds and more than half of all whales and dolphins have ingested plastic.

Humans are ingesting it, too. Microplastics and fibres that make their way into our waterways have also been found in sea salt, bottled water and tap water.

As much as we like to do our part by using reusable bags and travel mugs, changing our personal habits won’t cut it if plastic producers keep spitting out a steady supply of single-use items – Coca-Cola alone produces more 110 billion throwaway plastic bottles a year, that’s 3,400 every second.

If we want to stop plastic from destroying the planet we simply can’t keep producing products that are designed to be used for minutes and pollute for centuries. Recycling is not going to save us.

An estimated 91 per cent of plastics that have been produced to date have not been recycled. Products that are recycled are often downcycled to a lower grade of plastic that will end up in landfill or elsewhere in the environment after its second life.

Our global recycling systems are in disarray. Up until January, half of the world’s recycling was being shipped to China for processing, but due to increasing levels of contamination in those shipments, China imposed stricter requirements. That means big changes need to happen in places like Toronto to address our own blue box challenges.

The most efficient way to tackle any problem is to stop it at the source. Corporations that make single-use plastic bottles, food wrappers and other products need to own the plastic pollution problem.

Companies like Coca-Cola, Pepsi, Nestlé, Unilever, Procter & Gamble, McDonald’s, Tim Hortons and Starbucks have deliberately pawned off the end of life management of their products on to their customers and to municipalities. To send a product to market and not take any responsibility for its disposal is irresponsible and unfair.

Corporations have long contributed to fostering a throwaway culture of convenience, but their mess is no longer out of sight or out of mind. It’s killing our oceans.

We need to push corporations and local businesses to seek new alternatives to packaging for their products without compromising the health of our planet. We need to push all levels of government to regulate plastic production and companies to reduce.

The issue is top of mind for the federal government, which has identified marine plastics as a priority for Canada’s G7 presidency in 2018, but we must ensure this is more than just talk. The feds can – and should – ban problem plastics (like they did with microbeads) and set national policies to hold violators responsible.

Ontario is moving toward stricter rules for plastic producers. Under the Waste Free Ontario Act, we could see rules for packaging and blue box materials that would put the onus on companies to ensure their products get collected and recycled, or face penalties, fines and even bans. The problem is that the new rules could be years away.

We’re seeing leadership from municipalities in the form of bag bans in Montreal and Victoria. In Toronto, city staff are looking into reducing single-use plastics like take-out containers, coffee pods and black plastic.

We’re all affected by plastic pollution and we’re all capable of pushing for real solutions. Nearly every piece of plastic that has ever been made still exists in some form. If we all pitch in to tackle the root causes of this problem, we can build a movement to match the gargantuan scale of the plastic pollution crisis – and our communities, landscapes, wildlife and oceans might stand a chance.

Farrah Khan is a Campaigner on Arctic Issues and Plastics for Greenpeace Canada. Emily Alfred is a Waste Campaigner with Toronto Environmental Alliance.

As part of a global movement to #BreakFreeFromPlastic, Greenpeace is launching the Toolkit For A Plastic-Free Future to equip anyone concerned about the plastics crisis to take action in their communities and ramp up pressure to force plastic producers to make bold changes. As the city considers how to address single-use plastics, the Toronto Environmental Alliance will be hosting advocacy trainings to get people involved and encourage our city councillors to act quickly.