Scarborough councillors are split on the issue of privatizing garbage collection in their wards, while environmental advocates are urging the city not to mess with a good thing.

City council is set to vote Tuesday on a plan, backed by Mayor John Tory, to allow private companies to compete with unionized garbage collectors for a six-year contract to pick up waste east of Victoria Park Avenue.

The mayor said a managed competition process, which is expected to cost about $500,000, will ensure the city is getting the best deal possible. But CUPE Local 416, which represents the garbage collectors in that area and just signed a collective agreement last year, argues the area is running efficiently and contracting out won't save taxpayers money.

Scarborough has the city's highest waste diversion rate — the percentage of garbage diverted from landfills into recycling or composting — at 63 per cent, according to 2015 statistics. And figures from the same year also show the city spends less per home pickup in Scarborough than in Etobicoke, where private companies have done the waste collection since the mid-90s.

Coun. Jim Karygiannis, who vowed to vote against Tory's plan, said city workers in Scarborough have proven they're doing a solid job.

"So why are we throwing the union to the curb?" he asked during an interview with CBC Toronto at city hall. 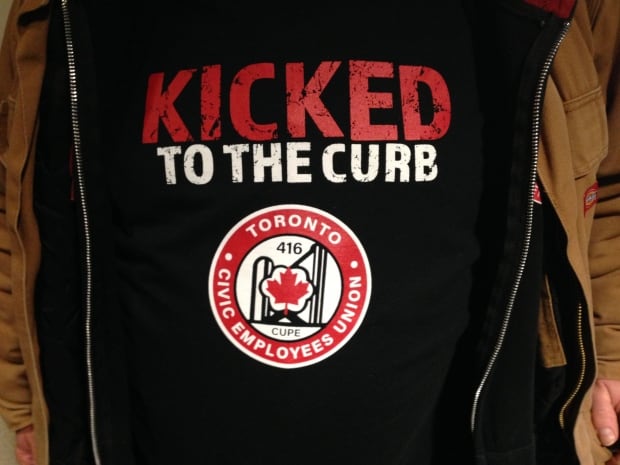 Workers with CUPE Local 416 wore these shirts to protest against a city move to consider contracting out garbage collection in Scarborough. (John Rieti/CBC)

Several Scarborough councillors, including Michelle Holland and Glenn de Baermaeker, also oppose the move, while others, including Coun. Chin Lee, who voted against the motion at the public works committee, have said they want more information.

Other Scarborough councillors are backing the privatization push. Coun. Norm Kelly's office said he will vote in favour of contracting out garbage collection because he hasn't forgotten the 2009 garbage strike, while budget chief Gary Crawford also supports the mayor's plan.

Right now, private companies collect garbage in Divisions 1 and 2, Etobicoke and the neighbourhoods west of Yonge Street, while city collectors handle the waste in Divisions 3 and 4, the area east of Yonge.

"There's a lot of information that's missing, and right now the difference in diversion rates we think is too big to ignore," she said, pointing out Division 3 also has a better diversion rate than the west end.

Garbage collectors can help waste diversion by collecting the right waste while leaving other materials behind, Alfred said, and by rejecting contaminated garbage and educating residents about their mistakes.

Toronto has set a long-term goal of diverting 70 per cent of all waste, and Scarborough is the closest to hitting that target. Alfred also warned that it's difficult to improve waste diversion rates, noting it can take up to five years to see a four per cent boost.

Alfred said she would like to see the money spent on competition process invested in waste diversion projects.

Contracting out would be tough blow for workers, former collector says

Josie Sanita, a city employee who now works with the parks and recreation department in north Etobicoke, has a unique perspective on the debate.

Sanita was once a garbage collector in the city's west end, but lost her contract job when the city privatized collection there. To pay the bills, the single mom took a job with a private garbage collector where she made about $5 less per hour, but was let go a short time later.

She expects private companies to go after the Scarborough contact and to win, something that would be a painful blow to the city workers currently serving the area.

"Do people think we're getting rich? Are you kidding me?" she said.

The city has noted any workers affected by a move to contract out — which likely wouldn't happen until 2018 — would be redeployed elsewhere in the city.