Two deputations were delivered regarding issues with the environment not addressed in the 2016 budget. TEA's Executive Director Franz Hartmann, spoke on January 12th at City Hall while TEA's Campaigner Dusha Sritharan, gave her deputation at the North York Civic Centre on January 13th.

The deputation Dusha delivered to the North York/Etobicoke subcommittee can be seen below. 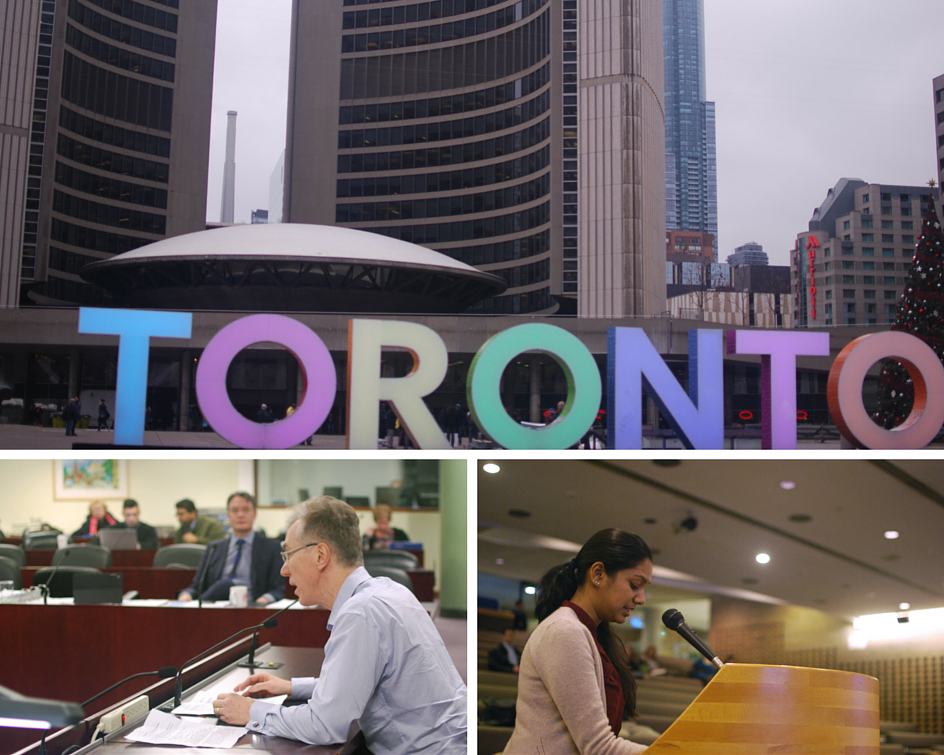 Thank you for the opportunity to speak. My name is Dusha Sritharan and I work with the Toronto Environmental Alliance. TEA has over 50,000 supporters spread across every ward in the city.

I have two key messages for Councillors:

Let me begin with where the budget fails the environment.

First, there is no money to avoid a TTC fare increase. We need to reduce car use not just to deal with congestion and reduce poverty, but also to improve air quality and reduce our greenhouse gas emissions. We want to encourage people to use the TTC, so raising fares every year sends the wrong signal to people who are doing the right thing.

Second, there is no new money for more tree planting or for taking care of existing trees. In 2008, Council committed to a plan to improve Toronto’s tree canopy, which is vital to keeping the city cool during heat waves and soaking up flood waters. The Mayor committed to planting more trees during the 2014 election. Yet, the budget does nothing to increase tree planting. Rather, the tree maintenance budget is cut. As well, the proposed budget fails to get the city back on track to meeting its 2008 timetable to increase Toronto’s tree canopy.

Third, there is no money to meet a Council commitment to hire the staff needed to prepare Toronto for climate change. In July 2014, Council adopted a host of recommendations aimed at building a resilient city. These recommendations included hiring new staff and public engagement activities, worth $1.35 million. Last year, $250,000 was set aside to hire on new staff. This year, there is no new money.

Fourth, there is no money to provide even minimal inspection and maintenance for Toronto’s ravines. Toronto’s ravines are important recreational spaces and green infrastructure. During floods, they channel water to the lake minimizing property damage. The rest of the time, they provide important green spaces that Torontonians and wildlife rely on. Yet, the proposed budget could not find $624,000 to help Parks staff do minimal maintenance in our ravines.

These are just 4 examples where this proposed budget undermines the environment, and Canada’s global commitment towards creating a low carbon future. There are many more.

We need to invest our taxes into more transit, more trees, nurturing our ravines and preparing the city for climate change.We need to find a way to invest in these green assets which are fundamental to ensuring that the value of our economic and social assets are maintained.

So why aren’t these initiatives being funded? Because we are caught in a circular argument. Many people say we should raise property taxes citing the fact that Toronto has the lowest property tax rate of GTA municipalities. Others are concerned about how property tax increases will impact some homeowners who are already struggling to make ends meet. Both sides are right. It’s time we moved beyond this simplistic discussion of revenues.

TEA joins the growing number of residents and organizations that are saying it’s time the city started using the revenue sources that the Province made available through the City of Toronto Act (such as the Vehicle Registration Fee, tobacco and alcohol taxes, and entertainment taxes.) We urge Council to move as quickly as possible to use these new revenue sources.

But, as you know, other organizations are already calling on Council to use these potential sources to fund other vital city programs, especially actions to reduce poverty.

Put simply, even if the city used all the revenue tools it currently has access to under the City of Toronto Act, there still wouldn’t be enough. It’s time City Council asked the Province to change the City of Toronto Act to allow the city to have a municipal income tax and municipal sales tax. This would allow Toronto to raise the money it needs to maintain our vital social and environmental infrastructure. Let’s end the current cycle of inaction.