Bad Grades for the TTC in First-ever TTCriders’ Report Card

Toronto: TTCriders, a voice for transit riders, released its first-ever report card that evaluates the TTC’s performance from the perspective of TTC users. 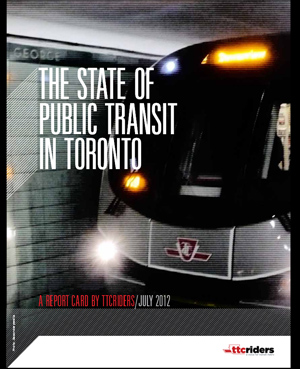 “While the good news is that transit expansion is getting back on track, the bad news is that fares keep going up while service levels keep going down,” said Jamie Kirkpatrick, a spokesperson for TTCriders. “If the TTC was a student, this report card would be a wake up call with a clear message: you must do much better.”

The report rates the TTC on how well it has done in achieving five goals important to TTC users: creating fair and affordable fares; building modern, fast transit to all corners of the city as fast as possible; making public transit fully accessible; providing frequent service that connects all of Toronto; and moving towards environmental sustainability.

The report card notes that building modern, fast transit into all corners of the city is back on track at City Hall. Unfortunately, action towards achieving the other goals have been delayed, derailed or not taken.

The report card makes it clear the TTC is not on track to building a public transit system that properly serves the needs of transit users. The key reason is lack of investment in maintaining and improving existing public transit services.

“It’s time we had an adult conversation about funding to maintain and improve the existing system, not just about funding for transit expansion,” said Franz Hartmann, Executive Director of the Toronto Environmental Alliance (TEA), a member of TTCriders. “Much of the blame with the TTC’s lacklustre performance lies with the Province and Federal Governments because they fail to provide real financial support for the TTC.”

Hartmann concluded: “Improving the TTC’s performance and building the public transit system Torontonians deserve needs the Province and the Federal Governments to properly invest in transit operations in Toronto.”