Biodegradable bags: a load of rubbish? 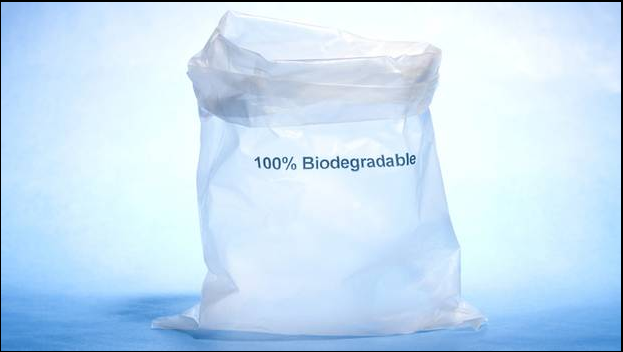 A simple, seemingly good idea – bags that break down into natural materials – is loaded with questions and problems

We shop, we throw things out. For the most part, we put it all in bags. So it makes sense to make a greener bag. But making sense of greener bags can make you feel ... well, bagged.

As biodegradable bags have hit the market, consumers have also been hit by confusing information. Because all bags aren’t created equal. Some bag manufacturers have been sued for making eco-claims that were not true, while some municipalities ban compostable bags because not all biodegradable bags are compostable … leaving consumers confused about which bags actually benefit the environment.

To find out if a bag is eco-friendly, ask “What is the bag made of?” says Franz Hartmann, executive director of the Toronto Environmental Alliance. “If it’s made from corn or some sort of a vegetable matter, that’s something that will truly compost.”

But bag manufacturers aren’t required to list a bag’s ingredients. As a result, finding out what a bag is made of isn’t always possible.

Another option is to check if the bag is certified by the New York-based Biodegradable Products Institute or the Bureau de normalisation du Québec, a member of the National Standards System of Canada. Bags certified by these organizations have been tested by independent laboratories and proven to compost within a certain time frame.

It also helps to know the difference between the terms biodegradable and compostable, says Susan Antler, executive director of the Compost Council of Canada. Biodegradable refers to a product that can change its chemical structure, but doesn’t specify how long the change will take or what the product will change into. Compostable means a product will decompose in a composting site within a set time frame and turn into materials that form compost.

Bags labelled biodegradable first appeared in North America in the 1980s. Although manufacturers hailed the bags as eco-friendly, many of them were potentially damaging to the environment. Some didn’t completely biodegrade: they disintegrated into tiny pieces. Sometimes just three per cent of the bag biodegraded, leaving 97 per cent plastic, says Steven Mojo, executive director of the Biodegradable Products Institute. The plastic fragments “could take decades or centuries to biodegrade.”

By splitting into tiny fragments, the plastic “was much more accessible to the watershed and could get picked up and absorbed by other species,” says Chris Winter, executive director of the Conservation Council of Ontario.

As a result, the label biodegradable is no longer considered a guarantor of green. “If a claim is that a product is only biodegradable, I don’t even pay attention,” says the Compost Council of Canada’s Ms. Antler. “Biodegradation could be five, 100 or 500 years.”

California even banned bag manufacturers from using the label biodegradable. And they can’t use the labels marine degradable or compostable unless the bags meet standards of the American Society for Testing and Materials.

Compostable bags entered the Canadian market 10 years ago but gained popularity over the last five years. While some consumers believe the bags will compost rapidly in landfills, the bags are designed to compost in an industrial composting facility, where “the time and the temperature and the moisture content is maintained and regulated by computer,” says Rod Muir, waste diversion campaigner for Sierra Club Canada.

“In a landfill there is no oxygen and very little water. The biodegradation that takes place is absolutely minimal,” Mr. Muir says. Consumers are mistaken if they believe the compostable shopping bags they get from a store and then throw out will quickly degrade into soil at a landfill.

A landfill isn’t designed for materials to biodegrade. “It just compacts more than it breaks down,” says Pat Parker, director of support services in Hamilton’s operations and waste management division.

Much like biodegradable bags, compostable bags were greeted with wariness by consumers due to some manufacturers’ false claims. In response, voluntary certification programs sprung up in the United States and Canada to verify manufacturers’ claims through independent testing.

But just because a bag is certified by the Bureau de normalisation du Québec or the Biodegradable Products Institute doesn’t mean the bag will wind up composting in a composting facility. Hamilton residents who use a certified-compostable bag, such as BioBag or Bag-To-Nature, in their green bins can relax knowing the bag will be shredded and composted along with their kitchen scraps. But in Toronto, which uses a much faster composting system, compostable bags are separated from organic waste and sent to landfill.

Since December 2008, Toronto has collected used plastic shopping bags for recycling in its blue bin system. The city sells the bags to a processor who turns the bags into pellets, which are then sold to manufacturers who create plastic auto parts, pipes and other products. “Those new products that they are manufacturing are meant to be durable products, not products that would ... break down in the environment,” says Geoff Rathbone, general manager of Toronto’s solid waste management services.

That’s why on June 1st, the city will ban retailers from handing out compostable or biodegradable shopping bags that could land in the city’s blue bins. (Residents can still use compostable bin liners for organic waste and garbage.)

Some environmentalists feel Toronto is on the wrong track. Instead of recycling plastic shopping bags, the city should ban them, Mr. Hartmann says. Then “the only bags left in the system are compostable ones.”

He asks: “Why are we using … non-renewable resources that we know contribute to greenhouse gas emissions and create toxins in the process of manufacturing plastics?”

In 2007, the Bureau de normalisation du Québec introduced a voluntary certification program for compostable bags in Canada. So far, five manufacturers’ and distributors’ bags have been certified. To be certified, a bag must:

• Disintegrate by at least 90 per cent within 84 days of the composting process.

• Biodegrade by at least 60 per cent or 90 per cent into carbon dioxide, depending on the type of polymer used.

• Have no ecotoxicological effect greater than 10 per cent on the germination rate of seeds and vegetation biomass rate. (It must promote plant growth.) For a list of certified products visit www.compostable.info

In 2002, the New York-based Biodegradable Products Institute introduced a voluntary certification program for compostable bags in the United States.

Bags undergo three key tests: One measures the product’s ability to be converted to carbon dioxide by organisms found in a compost pile at an acceptable rate. Another measures the ability of materials to fragment. A third test measures how the resulting compost supports plant growth. So far, 30 manufacturers’ and distributors’ bags have been certified.

In March, Frito-Lay introduced a compostable bag for Sun Chips. Certified by the Biodegradable Products Institute, the bag is accepted by composting facilities in Edmonton, Cape Breton, N.S., Sault Ste. Marie, Ont., and Kawartha Lakes, Ont. But not all composting facilities can take the bag. For instance, Hamilton processes compostable material in three weeks, while Sun Chips’ bag takes 14 weeks to compost.