Though many people toss coffee cups in the Blue Bin, the sad truth is that take out coffee cups are just not recyclable in Toronto's blue bins. That means far too many cups are sent to Toronto's landfill each year. 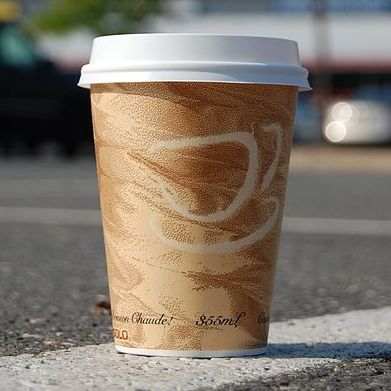 So what can Toronto do?

First - we can all carry a refillable mug, or have our coffee at the cafe. But, when it comes to coffee on the run, the good news is that the City of Toronto is studying the problem and doing some pilot tests this summer.

Recycling coffee cups is complex -- paper cups are lined with plastic (called polycoat) and this is difficult to recycle. In addition, the lids are plastic (polystyrene) and are designed to stay on tight, so if the lid isn't removed by the user, it doesn't always come off in the recycling process and contaminates the paper stream.

While some municipalities accept the cups in the green bin, or the blue bin, they all request that cup lids are removed. Toronto staff are concerned that increasing the level of potential contamination is a big problem for Toronto, as it may mean more paper sent for recycling actually gets sent to landfill instead.

What is Toronto doing?

The City of Toronto - as part of it's Long Term Waste Strategy - is doing some more research and some pilot studies on take out coffee cup recycling. This isn't the first time - in 2008 and 2009, the City did a number of reports on recycling technology, public behaviour and policy options. Read the past reports on the City website (scroll down).

What role do coffee shops have?

Coffee and hot drink retailers like Tim Horton's or Starbucks decide what type of material to sell their drinks in, so they need to play a role in how their cups are disposed of. Some retailers offer recycling in their stores, however since most cups leave the store, that doesn't solve the bigger waste issue.

Through voluntary programs, or through city or Provincial regulations, coffee shops could re-design their cups to make them easier to recycle. For example coffee cups could be made of a single material for both parts (e.g. a waxed polycoat lid, or a polystyrene cup body), or by using a different cup design. (Check out this new cup being tested in the UK - thanks to Ria for sharing this on the WasteFreeTO website!).

Ultimately, the best solution is to reduce the use of single-use cups altogether. Retailers can offer drinks in refillable mugs in-store, and consumers can bring their own mugs.