Every month, Toronto City Council meets to debate and decide on issues large and small that impact our city. From Uber to bike lanes, transportation was a key topic of conversation at Council last week. The future of Scarborough's sewage was also decided. 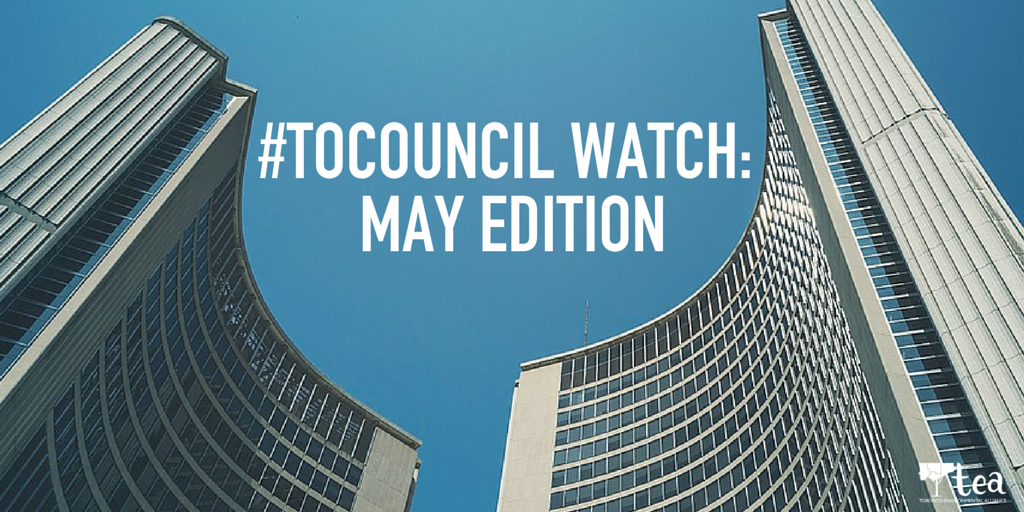 It should come as no surprise that transportation decisions of any kind always come with intense amounts of debate. How we move through our city is a big part of our daily lives. TEA wants to see ample and affordable travel options for Torontonians that minimize commute times and also help to clean our air.

The May 2016 City Council session debated these key environmental issues:

Perhaps known to many of us as 'the Uber vote', City Council spent all of May 3rd deciding how to regulate vehicles-for-hire including taxis and emerging services like Uber and Lyft.

As recently reported by Toronto Atmospheric Fund (TAF), there is concern about how the ground transportation industry will reduce vehicle emissions over time, especially since transportation is the largest source of greenhouse gas emissions and air pollution in our city.

"While the rationale is to level the playing field in the vehicle-for-hire industry, doing so should not necessitate a race to the bottom with regards to environmental standards" - Bryan Purcell, TAF

In 2014, taxicab fuel efficiency standards were introduced by City Council and TAF recently urged Councillors to not only maintain these requirements but extend them to all vehicles-for-hire. At Council this week, the most they were willing to commit to was
requesting staff to report back on developing an incentive program to reduce industry vehicle emissions in late 2017. This is a major regression from their original Green Taxi vision for low emission, hybrid and alternative fuel vehicles on Toronto's roads.

Read all the details on the vehicles-for-hire vote on City Council's website.

In other news, TEA is very pleased to see that active transportation, and the money required to test and build it, is finally moving forward at City Council. Active transportation refers to travel by walking and rolling (on bikes, skates or boards) - all healthy and emission-free ways to move around Toronto!

Perhaps the biggest victory at Council this week was a 38-3 vote in favour of pilot testing bike lanes on Bloor Street. It's now official: Bloor Street West from Shaw Street to Avenue Road will have bike lanes, perhaps as early as August or September!

Decades of grassroots efforts have gone into realizing this moment and the hard work of Cycle Toronto and Councillor advocates won the day! There was plenty of debate and a few amendments at City Council before the final vote. Ultimately, Councillors passed a pilot project plan that will strengthen the evaluation process by tracking additional performance metrics and doing an economic impact study.

Read all the details on the Bloor bike lane vote on City Council's website.

While pilots like Bloor's painted bike lanes can be fairly low cost, finding dedicated money to build Toronto's bicycle infrastructure always seems to be a challenge.

We were pleased to see Councillor Robinson raising attention to the need for federal funding to realize active transportation projects at City Council this week, which echoes an earlier request that TEA, Cycle Toronto and Walk Toronto made in a letter to the Federal Minister of Infrastructure and Mayor Tory.

Rather than vote on a funding request that named specific projects like the West Toronto Railpath and the East Don Trail, or adding other worthy projects to the list like Eglinton Connects (as attempted by Councillor Matlow), City Council decided to refer the item to the next Executive Committee for further exploration. It is a great sign that cycling infrastructure is not only being tested along Bloor and planned along Eglinton, it is becoming a funding priority for projects to actually get built.

Read all the details on the referred federal funding request on City Council's website.

Despite TEA's efforts to raise awareness about the many drawbacks of managing Scarborough's sewage waste by burning it in an incinerator, City Council decided to approve a plan that will fund and construct two new sewage incinerators at the Highland Creek Treatment Plant along eastern Scarborough's waterfront.

Aside from the air pollution and health concerns raised previously, TEA recently drew attention to non-burning process alternatives like thermal hydrolysis that would vastly improve sewage management at the Scarborough plant. Councillor McMahon won a motion requiring Toronto Water to report back on implementing thermal hydrolysis on the site, which could at least minimize the amount of sewage that needs to be burned.

Councillor De Baeremaeker passed a motion asking staff to explore renewable energy options for the site to offset greenhouse gas emissions from the incinerator and passed a requirement for more stringent emission controls on the incinerators.

The plan to build new incinerators at Highland Creek must still undergo a public consultation period through the Environmental Registry and get final approval from the Ministry of Environment and Climate Change.

Read all the details on the sewage incinerator vote on City Council's website.