At October's City Council meeting, a number of green topics were on the agenda, from the proposed Rail Deck Park and cigarette butt litter, to renewable community energy initiatives and smarter, safer travel options. Here's what happened. 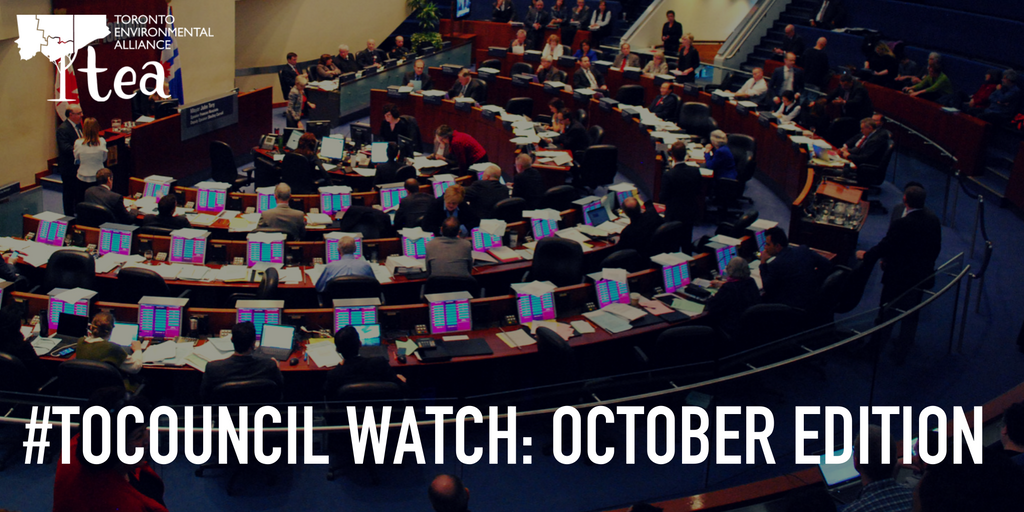 The Mayor’s Key Matter was the proposed Rail Deck Park, which aims to address the serious lack of green space in the downtown core between Bathurst Street and Blue Jays Way. Despite current and expected population growth in the core, there are very few naturalized spaces and even those that do exist are often cut off from communities because of rail yards and the Gardiner Expressway. Parkland not only provides a safe and welcoming space for people to socialize and recreate, they provide essential environmental services that clean the air, absorb stormwater, and keep us cool during heat waves. TEA’s Executive Director was recently on Zoomer Radio to show support for increasing the amount of green space available in our city and protecting the spaces we already have like our urban river valleys. Perhaps even more interesting than the price tag on this project is the question of whether or not the City has ‘air rights’ over this expansive downtown rail corridor. City staff will report back in 2017 with an answer to this question as well as information on how Rail Deck Park could be part of a connected network linked into the Green Line along hydro lands and extensions of the West Toronto Railpath.

Toronto City Planning and the Environment & Energy Division will be working together to develop a net-zero Community Energy Plan for the Mount Dennis community. This is exciting news for all of us, especially since the original plan was to build an 18MW gas-fired power plant in their community to serve as backup power for the new Eglinton Crosstown LRT. Community associations, Toronto Community Benefits Network, Blue Green Canada and Councillor Nunziata spoke out against the gas plant and pushed for a greener low-carbon vision for Weston-Mount Dennis that incorporates renewable energy, building retrofits, green roofs and much more. A proposed net-zero energy plan will make its way to the Parks and Environment Committee in the first half of 2017 for further debate.

Thanks to the Province's Feed in Tariff (FIT) Program, Toronto's rooftop solar energy sources generated 61,260 MWh of electricity in 2015 - nearly double what was produced the year before thanks to a jump in solar energy projects. Since every single rooftop solar project requires prior approval of City Council before it can apply to the FIT Program, Councillor Matlow successfully made the case for why the City should yet again declare its complete 'blanket support' for all such projects anywhere within the city limits for the next year. This can help Toronto applicants get the priority points they need to secure FIT funding in 2016.

Toronto was the first city to pass a by-law requiring green roofs on new building developments and in that same year Council also passed the Toronto Green Standard. Green roofs not only help our city deal with hot spots (aka urban heat islands), they also capture a lot of rainwater that won’t have to go into the sewer system and save buildings on energy costs. Toronto’s schools have large, underutilized roof spaces that could be used for green roofs or rooftop solar project and the City-School Boards Advisory Committee wants to do more to meet their requirements under Toronto’s green standards and by-laws. For this reason, City Council has requested the Province to align school capital and operating budget allowances with the Ontario Climate Change Strategy and Action Plan, which is a way to support school boards in meeting these green goals.

Pedestrians, cyclists, and folks with mobility challenges continue to face barriers as they travel through our city. Fortunately, these are issue areas that Toronto City Council has a lot of power to resolve. This month Councillor’s approved the addition of new bike lanes and cycle tracks across Toronto including sections of major streets like Bathurst, Kingston Road, and Sheppard Ave. They also developed a response plan to review accessibility and mobility barriers on sidewalks caused by hydro poles and street furniture. Councillor Holland also introduced a motion to investigate emerging Smart Road technologies that could help drivers become more aware of areas of the city and driving behaviours that can pose risks to pedestrians, cyclists and themselves.

City Council made changes to their by-laws so that restaurants, bars, and other establishments take responsibility for the sidewalk litter generated by their patrons. This action is primarily targeting cigarette packaging and butts, which can easily be managed by placing bins in the hot spots where most people gather and smoke. Cigarette butts and plastic/foil wrappings may be small but the filters are plastic, and aside from littering the ground, they get swept into our waterways and harm wildlife. In TEA’s Zero Waste report, we shared one possible solution: San Francisco charges 40 cents on every pack of cigarettes to help cover the $11 million they spend every year to clean up cigarette butts and litter. Requiring Toronto businesses to put some bins outside isn’t much to ask and it’s definitely a step in the right direction.