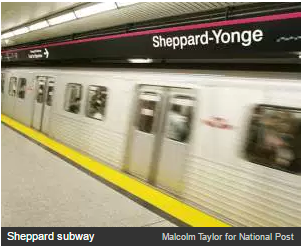 A former councillor and past GO Transit chairman has been hired to help Toronto seek federal funding for the Sheppard subway extension.

Gordon Chong is the new chief executive officer of the recently revived Toronto Transit Consultants Limited, now renamed Toronto Transit Infrastructure Limited, which has been tasked with preparing the business case for a piece of a $1.2-billion public-private-partnerships fund. Mr. Chong, who served extensive periods on the TTC, will be paid $100,000 annually for the job. He was hired by councillors Norm Kelly and Doug Ford, two members of the TTIL board of directors, according to Mr. Kelly.

Councillor Peter Milczyn, a commissioner on the transit agency, is the TTC’s proxy on the TTIL board of directors. The corporation had $160,000 left over from when it had last been in operation, and the TTC voted Wednesday to pay any additional expenses, subject to funding from the city.

Asked if the TTC could have prepared the business case itself, TTC chairwoman Karen Stintz responded: “Yes, but it was determined that it was better to carve it off and have this consulting body do that work… It’s an application for federal Canada funding and so it was deemed by the Mayor’s office that this was the appropriate way to move forward.”

The deadline for the business case to Ottawa is June 30. The TTIL is not required to hold public meetings, but will be reporting the minutes of its meetings to the TTC.

Mr. Kelly said Mr. Chong will do the heavy lifting on the file, therefore it’s “reasonable” that he be compensated. “We were pressed for time and we needed a guy who was familiar with the file, and was a metro councillor and a former commissioner and is a guy with good government contacts — we are, after all applying to a Conservative administration for assistance in funding the study — and he is a very bright guy,” said Mr. Kelly. He said the board considered about half a dozen other names before settling on Mr. Chong.

“It appears that running transit is a bit of a joke, and I don’t understand [how] wasting $100,000 to pay someone to do a job that we already have employees to do is good financial sense,” said Jamie Kirkpatrick, a transit campaigner. “As much as I know and respect Gordon Chong, one would think that if all contracts are to be tendered out, all senior jobs are to be also publicly advertised,” said Councillor Joe Mihevc.

Meanwhile, the revised transit plan generated debate at the commission. It voted against a request by Mr. Mihevc to report on various issues, including transit solutions for residents along Finch and in eastern Scarborough, and a cost benefit analysis of the Sheppard subway. Commissioner Milczyn promised “tremendous” public consultation on all the plans. “Certainly the Eglinton line will be built and I’m quite confident that we’ll find a way to build a Sheppard line as well. And building something is better than building nothing.”