Time to break up with your large garbage bin. The city has a plethora of handy services to help you redirect waste from your garbage bin. 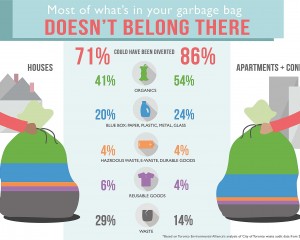 Despite a higher cost and growing list of recyclable and compostable items that you can put in the blue and green bins, some households are holding onto their super-sized garbage bins and continue to throw away stuff they could recycle, reuse, compost, and keep out of Toronto’s landfill.

Downsizing your bin will help you save hundreds of dollars a year.

I consider myself a recycler. In our household, my wife and I had a large recycling bin and a medium garbage bin. But last year when the garbage rates went up, I took a look in my garbage bin and discovered at least half the stuff should have been recycled or put in the green bin. Composting used tissue paper alone almost entirely eliminated garbage in my bathroom. Feeling a little ashamed and embarrassed, I called to order a smaller garbage bin.

After a year, we have never overflowed the small bin even with the addition of another member to our household (diapers go in the green bin). Our family of three easily fits two weeks of garbage into a small bin, with room to spare.

The City of Toronto has found that on average 38 per cent of the garbage in our bins is actually garbage — meanwhile 38 per cent could have gone in the green bin, 15 per cent in the blue bin, and the rest diverted through other city collection programs.

For those with extra large garbage bins, 77 per cent of the stuff in their bins could have been diverted away from landfill; even those with small and medium bins could be putting more into their blue and green bins.

According to the Toronto Environmental Alliance’s analysis of the city’s own waste audit numbers, we are sending 182,000 tonnes of organics to our landfill every year that could be going into the green bin. We are also sending 84,000 tonnes of recyclable resources to the landfill each year, never to be seen or used again.

Another reason to put more into your green and blue bins is to help create jobs in the city. Our recycling, composting, and diversion programs create jobs: 10 times more jobs than disposal to landfill because we need people to process the materials and work in the waste depots.

The last reason is to save space in our landfill. Right now our city’s landfill is filling up. Green Lane landfill will be full in just over 10 years if we don’t recycle and compost more. Finding a new landfill is not an easy task, is very expensive, and is bad for the environment. Most importantly, landfills aren’t good things. They take up beautiful land, and trap materials we could be reusing, including some toxic hazardous materials we should be disposing of properly.

It’s really easy to move to a small bin and increase the size of your blue and green bins. Simply [email protected], or call 311 to make the request. The city also has the Waste Wizard available for you online so you can find out whether something can go into your blue or green bin, instead of your garbage. If we simply used our green and blue bins more we could reduce how much we send to landfill by more than 300,000 tonnes per year. This could add almost 20 years to the life of our landfill. Do your part today by switching to a smaller bin and then encourage your neighbours to join you.

Mike Layton is the councillor for Ward 19, Trinity-Spadina.