When it comes to sorting garbage from recycling, Toronto is failing miserably. The city is losing millions of dollars as a result. 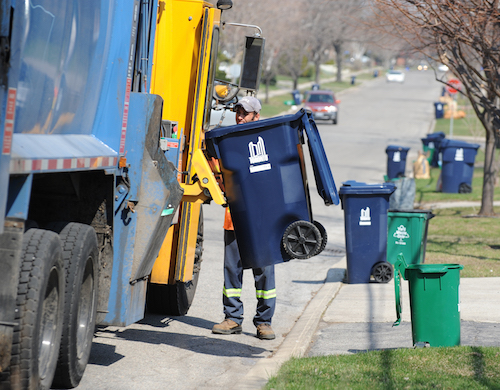 Every recycling day in Toronto, a handful of city staffers are out on a special mission.

Moving just ahead of collector trucks on residential curbsides, these special inspectors lift up the lids of the blue bins for a visual scan of what’s inside. If they find the bin stacked with materials that shouldn’t belong there, they leave it aside with a warning note for the resident.

It’s part of a six-month pilot project that started this month aimed at educating residents about sorting out garbage from recycling, something Torontonians are apparently failing at badly.

The city has been losing millions of dollars every year through the process of mechanically or manually pulling garbage and other contaminants out of the actual recycling material, according to the waste management department. And as much as 26 per cent of what’s collected from the recycling bins doesn’t belong there.

“People are so confused about what goes where,” said Robert Orpin, the city’s director of waste collection and litter operations. He noted inspectors have “seen it all” when it comes to recycle bins, from small barbecue propane tanks, broken car parts and kids’ toys to garden hoses, medical waste and even dead animals.

The most egregious of all is the ubiquitous black plastic bag, which Orpin said is “like poison.” He just doesn’t understand why people would put it into recycling.

For the time being there’s no cost to those found guilty other than leaving their bin uncollected, but Orpin said that could change in the future.

“At some point down the line, sooner than later, we’ll start issuing tickets. There’s a cost associated with this process,” he said. “We have to avoid losing that money and hopefully this educational campaign will help reduce the burden.”

“Recycling process is a bit slower than packaging innovation,” she said, noting companies are always coming up with new packaging material and it’s hard for the city to keep up. Home recycling is also different from work, business or school recycling.

“You think you understand the rules but it’s not the same everywhere,” she said. “People definitely need more than just information on annual calendars.”

Where to find information on how to sort out waste: