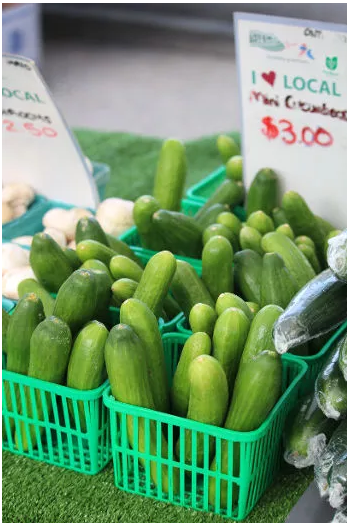 Photo Caption: Ontario mini-cucumbers, at the Mid Valley Farms booth at the Farmers' Market in Innisfil, Ont. on July 28, 2016.

The progression of summer is marked by an abundance of fresh fruit: strawberry season is overtaken by raspberries, cherries and blueberries. Environmentally minded consumers might be inclined to return their plastic pints to be reused by their local farm stand. But their good intentions are often thwarted -- many retailers won't refill them.

Food safety concerns loom large, but they can be overcome. Provincial legislation does not prohibit the reuse of food containers, as long as they're clean -- although packaging at farmers' markets may be municipally regulated through local health units or bylaws.

Packaging is a significant expense for food vendors and producers, as well as a daunting source of carbon emissions. So why don't more of them reuse what they can?

According to the Ministry of Agriculture, Food and Rural Affairs (OMAFRA), produce packaging regulations are outcomes-based: any suitable container is fine, as long as food is not exposed to contaminants. Sanitizing packaging is one aspect of managing the risk, along with proper food handling, storage, harvesting and pest control measures. Risk-averse vendors may simply decide single-use containers are a safer bet.

And yet this surely needs to change. A single-use culture is unsustainable.

Food packaging is widely considered excessive. Consumers who make the effort to bring their own bags are less than impressed with vegetables packed on Styrofoam trays, shrouded in cling film. According to the Toronto Environmental Alliance, packaging and product waste account for nearly 70 per cent of household garbage.

While consumers can opt for minimal packaging, reusing containers is a logical next step.

It's not uncharted territory. The Beer Store has run its wildly successful deposit-return program since 1927. The average glass bottle is reused 15 times before it is recycled. Last year the program reported to Waste Diversion Ontario savings of nearly $40 million in recycling and landfill costs.

The model should be expanded. If just half the wine produced in Ontario was sold in refillable bottles, according to Environmental Defence Canada, it would avoid nearly 7,000 tonnes in carbon emissions.

The province may not legislate against refilling food containers, but neither does it provide much encouragement. OMAFRA lists 16 different criteria to help producers choose "the ideal food package" -- properties such as lightweight, inexpensive, environmentally sound and protects against contamination -- readily acknowledging there is currently no packaging material that does it all. Sustainable often takes a back seat to cheap and attractive; reusable doesn't even make the list.

Selling food in refillable, easy-to-sanitize containers is a growth opportunity for entrepreneurs. But they need incentives to ensure a throwaway culture is not the most viable business option.

Currently, products and packaging at the end of their useful life are processed through waste diversion programs such as recycling -- or worse, landfill -- at significant cost to municipal taxpayers. Fortunately, this taxpayer subsidy for single-use packaging is coming to an end. Producer responsibility under the Waste-Free Ontario Act will shift the cost to manufacturers, importers and retailers, who in turn will add it to the sticker price -- ultimately affecting consumer behaviour. Nothing wrecks a single-use culture like paying for it.