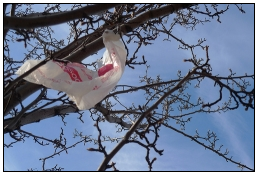 KIGALI, RWANDA—One of the first things you will likely notice if you have the chance to visit Kigali, the capital of Rwanda, is the extraordinary cleanliness that spans the city. This pleasant reality can be explained by looking closely at how the Rwandese manage
their environment.

Of particular importance is their stance on plastics: Rwanda is now entering its fourth year with a nationwide law banning all plastic
bags.

As Canada continues to debate the future role of plastic bags, it is worth looking at the Rwandan example, and understanding how such an initiative operates, and what benefits it can bring.
Toronto is the only Canadian city with a mandatory fee to the consumer of five cents per bag. However, in recent months Toronto mayor Rob Ford has repeatedly attacked the fee, and has explicitly stated that he wishes to get rid of it. Why you may ask? The answer: consumers are apparently annoyed.

A spokeswoman for the mayor, Adrienne Batra, told CBC news in December 2010 that “the mayor speaks with residents every day, and the thorny issue of the bag tax keeps coming up. People are sick and tired of being nickel-and-dimed to death.” It seems that Mayor Ford may be ignoring the facts, as multiple reports have indicated that the tax has greatly reduced the purchase of plastic bags in Canada. For example, Metro grocery stores have reported a drop of 80 per cent since 2009.

This reduction in plastic bag use is important for the Canadian environment, says Franz Hartmann, Executive Director of the Toronto Environmental Alliance.

“Plastic bags require fossil fuels and many chemicals to be produced. This is having a negative impact on the environment, and using up precious materials. They are also a major source of liter in Toronto, and are having a bad impact on wildlife outside the
city.”

Although the fee is playing a positive role, it is worth looking past initiatives that simply aim to reduce use and toward those that target outright elimination. The perfect case study is the fight against plastic bags in Rwanda, a fight that has led to their complete
demise.

For anyone who has travelled in Africa the ubiquitous nature of plastic bags sprawled everywhere is an undeniable reality. The problem has not gone unnoticed though: several African countries have been working to ban plastic bags for years.

Located in Eastern Africa, Rwanda is largely known for its tragic genocide that exploded in April 1994. Since then it has tended to operate as a relatively unknown country outside certain political and economic circles. However, for such a small, developing nation it is home to a variety of unique, forward thinking policies.

In 2008, Rwanda declared a nation-wide ban on all plastic bags.

The initiative was a response to the two most common ailments caused by plastic: a well documented understanding of plastic's negative environmental impacts, but equally influential, the extensive physical presence of bags around the country.

Dr. Rose Mukankomje, the Director General of the Rwanda Environmental Authority (REMA), has been at the forefront of this policy, and continues to work on a daily basis to monitor its progress.

“In 2004, the Ministry of the Environment began to conduct studies on the use of plastic bags in Rwanda,” she explains. “At that time people had started to see plastic invading everywhere—black, yellow, red colored bags—causing even visual pollution.”

In addition to the visual pollution, research from the National University of Rwanda reported the widespread environmental consequences of plastic. “Plastic was not only all over the ground, but underneath as well. This hindered agricultural production in
Rwanda, as plants cannot grow past the plastic. As well, our water sources were becoming highly polluted with plastic being found inside many dead fish,” Dr. Mukankomje recalls.

The first step was raising awareness about this information. This began in 2005 during the national day of cleaning, called Umuganda. As the communities around Rwanda began to clean up they were asked to collect all the plastic they could find.

“We came up with a huge, huge amount of plastic—in the land, around our compounds, everywhere—everyone was scared,” says Dr. Mukankomje.

This event signaled the turning point. It not only sensitized many Rwandans to the problem of plastic within the country, but it got politicians thinking about the issue as well—President Paul Kagame took part in this event. A nation-wide campaign began by
flooding the media. Furthermore, local NGOs and businesses were commissioned to create alternatives—mainly cotton or banana leaf bags.

The advocacy was a success and in 2008 a bill was finally passed to ban plastic bags within Rwanda. While there was still much resistance from the affected private sector, the culmination of the campaign can largely be attributed to developing a general
consensus among Rwandans. Dr. Mukankomje explains, “You need a policy to get rid of plastic bags, but it must be wanted to be successful.”

The benefits of Rwanda’s plastic bag ban were quickly evident: in 2008 UN Habitat named Kigali the cleanest city in all of Africa. Now three years since the bill was passed, Rwanda remains a plastic bag-free country, and has developed a reputation across the
region for its extreme cleanliness. The passing of the bill coupled with Rwanda’s monthly day of cleaning has insured that it remains this way, and will continue for the foreseeable future.

As Toronto debates the future of plastic bags, the story of Rwanda, now more than ever, should be considered. Though different in many fundamental ways, Canada, like Rwanda, relies greatly on its natural resources. Thus, the future health of the land is of pivotal importance in both countries.

“Human civilization has worked just fine without plastic bags. It’s only been in the last 30 years that they’ve reared their ugly head,” says Hartmann. “Getting rid of them completely is the best solution. I don’t see what the issue is.”

Eliminating plastic bags will play a huge first step in curbing the prevalence of plastics in the Canadian environment. As Dr. Mukankomje frames it, “We must not see this as a challenge, but as an opportunity.”

Ryan Kohls is a freelance journalist out of Peterborough, Ontario.