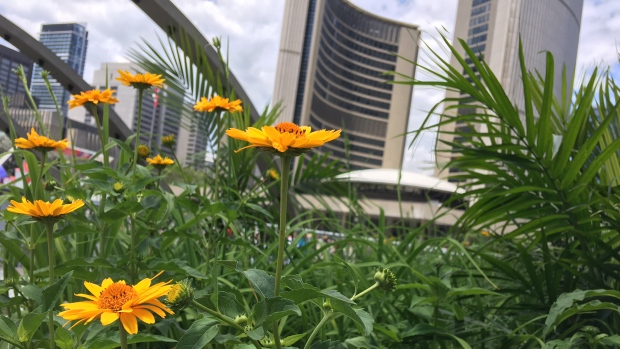 Following a heated debate about the costs — and benefits — to taxpayers of going green, city council unanimously approved TransformTO, a blueprint staff will use to guide the city as it reduces greenhouse gas emissions over the next three decades.

The plan, however, is far from a done deal.

That's because council also approved a motion in a 27-16 vote to prioritize the more than 20 recommendations in the plan based on their business cases. That means that those recommendations that will create the biggest reductions, for the least amount of spending, will be put at the top of the list.

Environmentalists, both those on council and in the non-profit sector, had hoped Transform TO would pass through the debate without those changes.

The plan calls for the city to reduce its greenhouse gas emissions by 80 per cent by 2050 — something the report notes it's not on pace to do right now, despite several successful green initiatives. To get there, changes are recommended for everything from building design to transportation to how you take out the trash.

Following the votes, the mayor's office released a statement from Mayor John Tory in which he noted that Toronto would need the financial support of the upper levels of government and the private sector to be successful in meeting the emissions targets.

"As a city, we need to set ambitious goals to reduce the negative impacts of climate change and increase Toronto's resilience so we can address the very real social and economic challenges of the 21st century," Tory said in the statement. "TransformTO provides a path forward that will ... lead to a low-carbon city that is healthy, prosperous, strong, and equitable."

Earlier in the day, Tory said he wanted to see council adopt the plan, but the city's investments have to be maximized.

Coun. Mike Layton, citing the mayor's trip to the major climate conference in Paris, pressed Tory about whether or not he will support all of the recommendations, noting many of them work together to meet their goals.

Tory did not answer directly, replying instead that he wanted to see a list of the priorities.

"I think it is necessary and it is our responsibility," he said.

Coun. Mary-Margaret McMahon, chair of the city's parks and environment committee, had been the one who put forward the motion asking staff to prioritize the recommendations based on how much greenhouse gas is reduced per dollar spent.

Getting the additional information will help educate critics of the plan while also answering questions from organizations like the board of trade, she said.

But Coun. Gord Perks blasted that idea, and warned seeking a list of priorities will lead to TransformTO being weakened.

If that happens, he says, "we won't meet our targets."

Coun. Denzil Minnan-Wong questioned how much taxpayers will wind up spending on this plan.

City staff confirmed adopting every recommendation would cost some $6.7 million in 2018. That money would have to be approved through the city's budget process, in which city officials have been urged to freeze spending and look for efficiencies.

TransformTO is expected to cost about $60 billion over its lifespan, however staff noted that the city would likely only cover 10 per cent of that, with the rest coming from partnerships with other governments and organizations.

Several councillors say if the city doesn't invest now, it will have to pay more down the road, citing the huge costs resulting from severe weather events like the 2013 ice storm and this spring's flooding.

"We don't need any more information to tell us to do these things — and more," said Layton.

"It is crucial for Toronto to commit to ambitious climate actions to reduce our emissions and build a more sustainable and resilient city," the Toronto Environmental Alliance (TEA) said in a statement ahead of the debate.

At the beginning of the meeting, several councillors announced they had received hundreds of signatures on petitions supporting TransformTO. A number of people also came to city hall to show their support for the plan, including two children from Thorncliffe Park Public School.

Ezzah Nadeen, 8, and Mohammad Husnain, 9, say they're worried about climate change because of the dangers it poses to plants and animals. They're hoping councillors cast a vote against climate change.

"Them seeing me may change their votes for the future," Nadeen said.