Concerned citizens turned out for a town hall meeting on Thursday at the Davenport-Perth Community Centre to learn more from local politicians and environmentalists about the uranium processing plant operating in their neighbourhood. 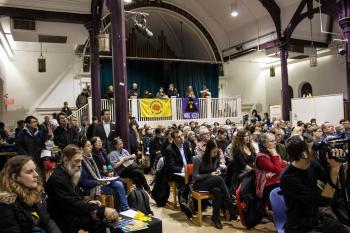 Up until a few weeks ago, most residents were unaware that a nuclear facility producing nearly 2,000 tonnes of radioactive uranium dioxide pellets yearly existed in the Lansdowne and Dupont St neighbourhood.

On November 8, the Toronto Star reported that “the General Electric-Hitachi plant has been processing natural uranium powder into centimetre-long pellets that are assembled into fuel bundles elsewhere for Canada’s nuclear reactors since 1965.”

But it wasn’t until anti-nuclear activist Zach Ruiter started going door-to-door this fall informing residents about the plant that NOW magazine and mainstream media picked up the story.

And while it’s true that Ruiter took on the GE-Hitachi facility in Peterborough while studying at Trent University, he grew up in the Davenport-Perth neighbourhood and now lives in central Toronto.

“Wouldn’t it have been good to have this information over the last 50 years?” asked Andrew Cash, NDP MP Davenport. “I’m really shocked by what I’ve learned over the last few weeks. Like many of you, I had no idea this was here.”

Over the next couple of days, Cash promised he would call on the Minister and the CNSC to come to a public meeting with the community so residents can find out what’s happening. He also said the company is willing to bring residents into the company for tours of the facility. “We will be holding their feet to the fire on that one,” said Cash.

The Toronto Star reported on November 8 that “In 2011, the Canadian Nuclear Safety Commission granted the GE-Hitachi facilities in Toronto and Peterborough a 10-year renewed licence. As part of the process, the company testified in Ottawa that it had improved its public consultation process and made an effort to keep nearby residents informed.”

But how many residents really understand what could happen in the event of an accident at the GE-Hitachi facility in Toronto?

“We do know that if there is an industrial explosion in a place with ‘natural uranium’, that would spread all over the city and contaminate that city with radiation forever because uranium is radioactive for 4.5 million years,” said Ruiter. “So it isn’t just about this community.”

Several experts say there is no safe level of exposure.

“And so if you’re drinking the water or breathing the air or eating food grown locally then there’s a high chance that there’s some radiation contamination,” said Amanda Lickers who has studied environmental chemistry at Trent University and presented at public tribunal hearings. “So even if you’re taking in small amounts, over time the amount of radiation in your body is increasing. And this is something that stays in your system long term.”

Which could lead to cancer or birth defects years later.

“But GE will deny everything,” said Roy Brady, community activist, retired elementary schoolteacher, former Chair of the Peterborough Health Coalition. “They will consider everything safe and manageable.”

Kyra Bell-Pasht, counsel at the Canadian Environmental Law Association (CELA), attended Thursday’s town hall to provide legal information only. That’s because CELA hasn’t been retained to act for any party in relation to anything to do with the GE-Hitachi uranium processing plant.

Bell-Pasht said CELA has a long history of involvement in energy related cases and law reform efforts, including nuclear power regulation. She explained that the federal government is responsible through the CNSC for controlling nuclear power and related activities. “Both the processing and transportation of uranium are regulated by the Commission,” said Bell-Pasht. “When applying for license renewals, an applicant is required to give notice to surrounding community members. The public can request to speak or make written submissions to the CSNC. Licenses are granted if the applicant has adequate provisions for the protection of the environment, the health and safety of persons and the maintenance of national security.”

Internal and external audits of the facility happen on a yearly basis to ensure standards are met under the licensing conditions. And annual compliance reports must be made available to the public.

“Compliance reports outline annual emissions to the environment of uranium as well as workplace exposures to radiation,” she said.

“Renewals are normally granted if a licensed applicant has complied with its license conditions.”

Copies of licenses as well as conditions associated with those licenses are available to the public upon request to the CNSC.

“You are doing what so many other communities across the city of Toronto should be doing,” said Heather Marshall, Toxics Campaigner, Toronto Environmental Alliance (TEA). “Which is exercising your right to know. And you will continue to do that through the process of figuring out what to do about the GE plant in your neighbourhood.”

Toronto is the first city in Canada to pass the Community Right to Know bylaw.

“On December 3, 2008, Toronto City Council voted for a precedent setting toxics disclosure policy,” said TEA on its website. “With an overwhelming vote of 33-3, Toronto became the first city that would require businesses - from dry cleaners to funeral homes and auto-body repair shops - to reveal their discharges of 25 priority chemicals.

“The Community Right to Know bylaw (CRTK) will be phased in over four years starting in 2010.”

“So there’s a lot of work we need to do,” said Marshall. “(Especially since) the provincial and federal governments have been horrible at figuring out the cumulative health impacts to neighbourhoods when two or more facilities release emissions.”

See the original article at: