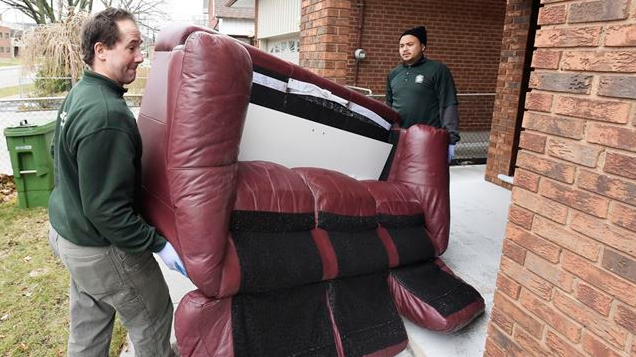 People should consider if they truly need something before buying it, the Toronto Environmental Alliance (TEA) says.

She suggests people buy less and use it longer when they do.

“It’s hard, especially with the holidays coming up. People don’t want to hear that. But, think a little bit before you buy things. Buy less, buy things that are more durable and are going to last longer, and know that when you’re done with it you can give it away.”

The City of Toronto managed nearly one million tonnes of waste (garbage, recycling and compost) in 2013. That is a number the city says is not sustainable.

This number also only covers residential waste, while businesses produce as much as 60 per cent of all waste, Alfred said.

While the strain on landfills is great, the environmental impact is worse when you consider how much energy goes into making a product. Making products requires a lot of water, natural resources and electricity to create, plus to ship it across the world, and then a store uses energy to sell its products.

“We have a finite amount of resources on the planet. If we take them and make them into something and just waste that thing and throw it to landfill or just burn it up, all the resources that are in that should be reused,” Alfred said.

Toronto has a 53 per cent diversion rate, but a waste audit revealed that 85 per cent of waste that comes out of a home is either recycleable or compostable.

“If everybody recycled, composted or reused everything they could, we’d have a really small amount of waste,” Alfred said.

The City recently passed a Long Term Waste Strategy, which aims to improve diversion rates and teach people to cut down on food waste, to recycle more, and to reuse things.

Before you throw something away, Alfred suggests people find someone who could use it still. She suggests Furniture Bank, which redistributes used furniture to such folks as incoming refugees or to people who need help with housing.

One Toronto-based company does just that.

Just Junk, which services residential and business properties, says 60 per cent of the “junk” it picks up from clients is either recycled or donated to such places as Furniture Bank, Salvation Army and Habitat for Humanity.

“When we donate this stuff and we see people enjoy it – we’ve even seen people in the streets need stuff and we give it away – that’s the best part of this job,” said Alden Tupe who works at Just Junk’s Toronto South franchise. The franchise serves about 100 clients per week.

Alfred asks people that when they do get rid of the things they own that they don’t just replace it with more stuff.