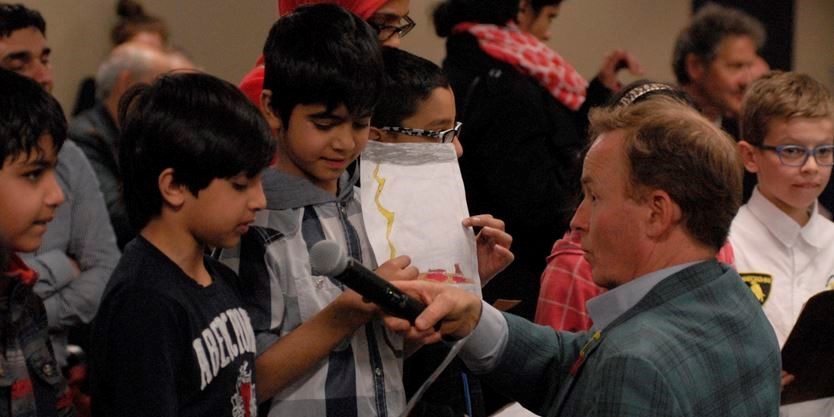 James Snetsinger brought Grade Three students from Thorncliffe Park Public School down to Toronto City Hall to advocate for an ambitious climate action plan at the Parks and Environment Committee.

Toronto’s Parks and Environment Committee has recommended going ahead with an ambitious climate change plan that would cut the carbon footprint of public housing, transportation and new development by 2050.

The plan, TransformTO: Climate Action for a Healthy, Equitable and Prosperous Toronto received unanimous approval at the May 4 committee meeting, after members heard from about 30 activists and members of the public extolling its virtues.

Indeed, the only advocate who was silent on it was Parkdale-High Park Councillor Gord Perks who led the charge in early 2015 to establish a subcommittee of the Parks and Environment Committee and consult on developing a municipal plan to combat climate change.

“The plan speaks for itself,” Perks said after the vote. “This is both the most ambitious climate plan I’ve seen and I’ve looked at thousands of them from around the world — it’s the most specific and practical. You can look at this plan and see what action we have to take; it’s a real road map.”

By 2050, the plan requires 75 per cent of energy use be derived from low-carbon and renewable sources, and 30 per cent of floor space would be connected to low-carbon thermal energy.

And finally, 95 per cent of waste would be diverted by 2050 and all transportation options would use low or zero-carbon energy sources.

Deputations were largely cheering the plan at the committee meeting — including a Grade Three class from Thorncliffe Park Public School, who recited a poem urging the committee to support the plan, and numerous activists who noted that the plan would also create jobs and contribute to the revitalization of Toronto’s social housing stock.

“It is clear from this plan that we have the opportunity to maximize community benefits as we ramp our efforts to tackle climate change,” said Dusha Sritharan of the Toronto Environmental Alliance.

Trinity Spadina Councillor Mike Layton said in debate that the benefits would be manifold.

The committee voted on the matter as Toronto was preparing for a major spring rain storm, that might have required the evacuation of parts of the Toronto Islands.

Council will debate the matter at its May 24 meeting.