A plunge in revenues for some recyclables is emphasizing the costly problem of people putting “contaminants” in the city’s blue bins. 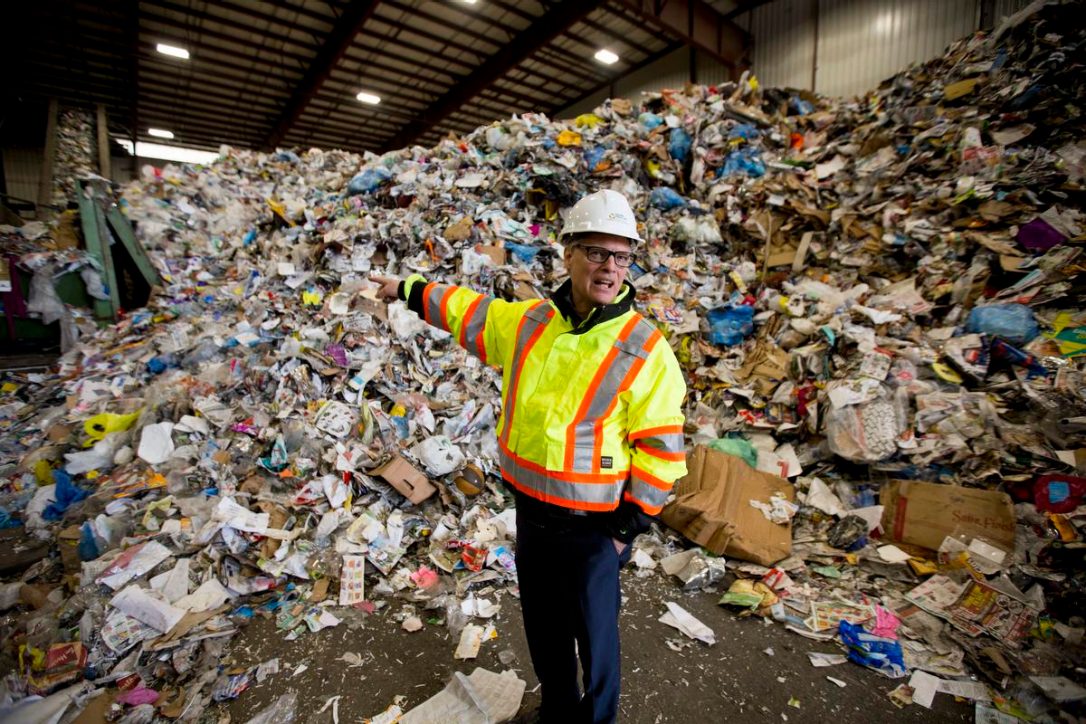 Toby Whitfield is such a blue-bin stickler that his wife says his “favourite piece of literature” is the city of Toronto calendar listing what can and cannot be recycled.

The Harbord Village resident fishes out offending items placed by others. But even Whitfield admits to occasional confusion over the long list that says, for example, “soft, stretchy” plastic like bread bags belongs in the bin while stiff, crinkly wrap from sandwich meat is garbage.

Then there are items including black plastic food trays and single-use coffee pods marked recyclable, sometimes aggressively so, but not on Toronto’s list — so they get sent to landfill.

Whitfield is far from alone. Even Jim McKay, the city official in charge of recycling, admits: “It’s becoming complicated for a resident to understand what is recyclable and what isn’t.”

The blue bin is many residents’ primary environmental contribution. A steady rise in the “contamination” rate — how much verboten material goes in the bin — above 25 per cent is in the city hall spotlight because it is combining with other factors to dramatically reduce Toronto’s recycling revenues.

Those factors — including China and other nations banning imports of low-quality recyclables, and manufacturers here using all manner of new packaging — are hitting municipalities across Ontario and beyond, sending them scrambling for solutions including better education of homeowners.

In the “audit” room of the sprawling North York site of Canada Fibers Ltd., where much of Toronto’s blue bin contents lands, a brown bin holds contaminants. There are balls of hair, chip bags, straws, cereal bag liners and cardboard so dirty it must have been outside for a long time.

Torontonians also try to recycle bowling balls, VHS tapes, clothes, containers with enough food in them to contaminate paper and other bin contents and, recently, a mannequin head.

Mark Badger, Canada Fibers executive vice-president, acknowledges alarm in the recycling community about “tectonic shifts” in the market. But sees the bin as half-full, not half-empty.

Ontario blue-box programs diverted almost 900,000 tonnes of waste from landfill last year and got municipalities more than $90 million in revenue to help cover the cost of doing that, he said.

Toronto homes diverting about 52 per cent waste away from landfill is “pretty good” compared to North American cities, Badger says, and most Torontonians do pretty well at sorting. The “purity tsunami” of countries demanding clean, high-quality recyclables is a “gigantic wake-up call,” he adds, to innovate at home and build a local use-and-reuse “circular economy” here instead of shipping low-quality waste abroad.

“Recovered commodities are not fetching prices they used to, but let’s look beyond that at what’s possible with better communication with homeowners, increased dialogue with packaging companies about what’s recyclable, and let’s look at the possibilities of technology to achieve purity,” he said.

Problems for his plant, which has a mix of human and automated sorters, include clothes that can get wrapped around machinery, forcing shutdowns, and food containers with organic waste.

“You don’t have to put containers through the dishwasher — just eat the yogurt and rinse out the container,” Badger said. “We don’t want people to throw their hands up. We also don’t want them to put a half-full jar of peanut butter in the blue box.”

Emily Alfred, a senior campaigner at Toronto Environmental Alliance, said homeowners need to do their part but the real solution lies with companies producing and selling non-recyclable packaging.

Until Ontario implements a delayed plan to make waste producers, rather than municipalities, fully responsible for sustainable reuse and disposal — as B.C. did with the creation of Recycle BC and a single provincewide blue-bin program — contamination will be a problem, Alfred said.

“People throwing spaghetti or a T-shirt in a bin is obvious contamination, but if somebody puts in black plastic, or pouches, that’s not the city’s fault. That’s where producers aren’t paying their fair share,” she said.

“We really need to look at what the city can do to regulate and restrict this stuff, including single-use items products, in the first place, on its own. We can’t necessarily wait for the province.”

McKay, the city’s general manager of solid waste, says his staff are brainstorming ways to help Torontonians reduce the contamination rate, beyond the recycling calendar, the online “waste wizard” identification tool and ads that have run on TV and radio and in movie theatres.

They will, over the next six months or so, inspect blue bins across the city and educate homeowners who try to recycle zippered baggies, pots and pans or garden hoses. The minority of Torontonians who really don’t care, and use recycling bins as a blue garbage can, could in future face fines.

The city is also looking at whether stores should point out non-recyclables to shoppers.

“Is there a way, at the point of purchase, to make people aware if things are recyclable or not?” McKay asked. “Is there a way that you can (counteract) advertising on a product that something is recyclable when it’s not — can we do something on the shelf to say, ‘Please don’t put this in your recycling’?”

Another option under review is taking the job of sorting out of the hands of residents — having them fill one bin to be later sorted by optical-sensor machines, staff or both. That could drop the contamination rate while shifting some costs to the city.

With current technology, however, so-called mixed waste processing that sees organics and packaging dumped together would likely render most paper collected in Toronto unrecyclable.

Meanwhile, Ontario municipalities are talking to see if pooling resources to create economies of scale could help offset plummeting revenues for some products. Halting the recycling of some products is also a very real possibility for many.

Back in Harbord Village, Whitfield, the keen recycler, suspects increased education won’t do the trick.

“You need something that makes it easy for people to recycle properly,” he said.

“I think the solution is probably upstream, with the manufacturers having more of an incentive.”