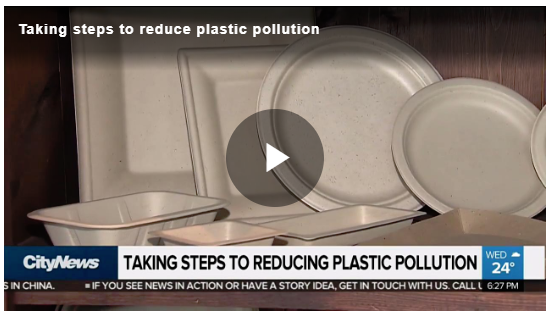 When it comes to the huge environmental problem of plastics in our oceans, you may be surprised to learn that the issue is also very serious right in our own backyards.

According to the Toronto Environmental Alliance (TEA) 10,000 tonnes of plastic pollution winds up in Lake Ontario and the rest of the Great Lakes every year. The city says it wants to do more to try to reduce that.

The Public Works and Infrastructure Committee passed a number of motions on Tuesday after hearing deputations from environmental groups.

The city took the first steps to banning plastic straws with the potential process for reducing or eliminating single use items such as take out containers and other plastics — imposing fees on their use is one idea.

While TEA says it welcomes the news, reducing this number goes further than beach cleanup efforts. 89 per cent of the pollution found on our beaches still comes from plastic waste.

“We’ve got to look at the responsibilities of people to handle the waste properly,” says Emily Alfred from TEA. “But also, companies that are profiting from pushing that disposable packaging on us…and they have the power to redesign their packaging or offer us alternatives or to offer us reusables.”

Green Shift is the first company in Canada to offer such products — producing fully compostable and biodegradable products including straws made of petroleum-free plastic, environmentally-friendly, non-toxic take out containers, cups plates bowls and cutlery.

Owner Jennifer Wright says there is more and more interest in these kinds of products.

“Every year, we are growing by 10 to 15 per cent. That’s just people finding us, calling us, without us trying to persuade anybody and that’s as a whole,” says Wright. “But our biggest goal is to get the ingredients to be a lot more healthy. For example, getting off petroleum. There is a huge issue of what happens when straws are let loose on the street or getting into our oceans and getting off our dependence on petroleum plastics (is important), so there is whole life-cycle that is much healthier.”

But of course there is an added cost to being environmentally responsible. For example, Green Shift’s containers made primarily from sugar cane and polylactic acid which is an ingredient found in corn, work out to about $36-dollars for 200 or 18 cents each, compared to under $20-dollars for 200 polystyrene or foam containers about the same size.

But Wright points out its only about 9 cents more per unit, a cost that should be fairly easy to absorb.

“If you care and you’re somebody that is looking for healthier food, it’s nice to know that they could be recognized as being leaders,” she says. “Spend a little extra and there will be customers that will pay for it and I think especially when people realize the implications.”