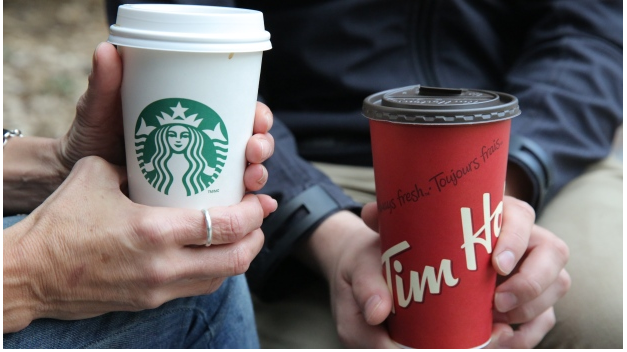 The city is reminding residents this month what exactly can and can't go into the blue bins and you may be surprised at what can't be recycled. As it turns out, the takeout coffee cups you've been tossing into the recycling actually have to go in the trash.

The city's "recycle right" web portal explains that food scraps, textiles, old VHS tapes and other items have been turning up in blue bins, where they don't belong.

According to the city, which launched the campaign earlier in June, an estimated 45,000 tonnes of garbage was mistakenly put into recycling bins last year alone.

Among that haul are the takeout coffee and tea cups we get while we're on the go. The city says that because those paper cups are lined with plastic or wax they can't be recycled. The black plastic coffee lids also can't go in the blue bin, although non-black plastic lids, as well as the cardboard cup sleeves, can be recycled.

The city's web portal provides detailed information about what waste goes where.

Emily Alfred, senior campaigner with the Toronto Environmental Alliance, said the fact that coffee cups are ending up where they're not supposed to speaks to a larger issue.

"Millions of cups are used in Toronto every year and people are taking these out and putting them in the wrong bin," Alfred told CBC's Metro Morning on Tuesday.

"It's actually symbolic of a bigger problem that waste is really confusing."

'Recycling's the right thing to do'

In 2010, Canadians used an estimated 1.5 billion disposable coffee cups, equivalent to more than half a million trees.

Alfred applauds the city for launching the education campaign, but she also doesn't want residents "to feel badly about trying to do the right thing.

"We don't want people to mistrust the recycling system or feel guilt about recycling. Recycling's the right thing to do. The bigger issue is that most of our recycling is ending up in the garbage. People are putting too many recyclables and compostable food waste right into the garbage bags."

When coffee cups are thrown in with the recycling, Alfred said, they compromise the integrity of the system.

"They can't separate the plastic and paper in a typical paper recycling facility," Alfred said. "So it just causes contamination of the recycling stream, and it causes lower-quality paper if it does get recycled."

Several years ago, the city considered measures to reduce the number of coffee cups that made their way into the garbage. These included mandating that coffee chains provide full recyclable cups, or requiring that cup manufacturers take responsibility for recycling their products.

Coffee chains pushed back, and started their own in-store recycling programs.

However, a CBC Marketplace investigation last year found that many paper cups collected by some Toronto Starbucks and Tim Hortons locations for recycling are sent to landfills, and not to a recycling plant.

Both companies said they are committed to their recycling programs and to reducing waste as part of their business practice.

'People can change their habits easily'

Meanwhile, new provincial regulations passed last month call for changes to be rolled out over the next few years regarding what products companies can sell, Alfred said. Her organization will be pushing for more producer responsibility laws, which call on companies that design and manufacture products to take on the responsibility of recycling them.

Producer responsibility laws already exist for products such as tires and beer bottles, which all have strong return and recycle rates, Alfred said.

For now, consumers can consider carrying their own reusable coffee cups while they are on the go, ask for a ceramic mug if they plan to consume their drink in-store, and support their local MPP if he or she has launched efforts to change recycling or producer responsibility laws.

"I hope that people look at the packaging in their hands and say, 'Wow, I didn't really realize how big of a problem this was,'" Alfred said. "I think people can change their habits easily if they understand what to do."