As part of our project Accelerating Neighbourhood Climate Solutions Through Community Hubs, we’re sharing stories and exploring some of the lessons that can be learned from community hubs about our city’s emergency response and how to build low-carbon and equitable neighbourhoods. 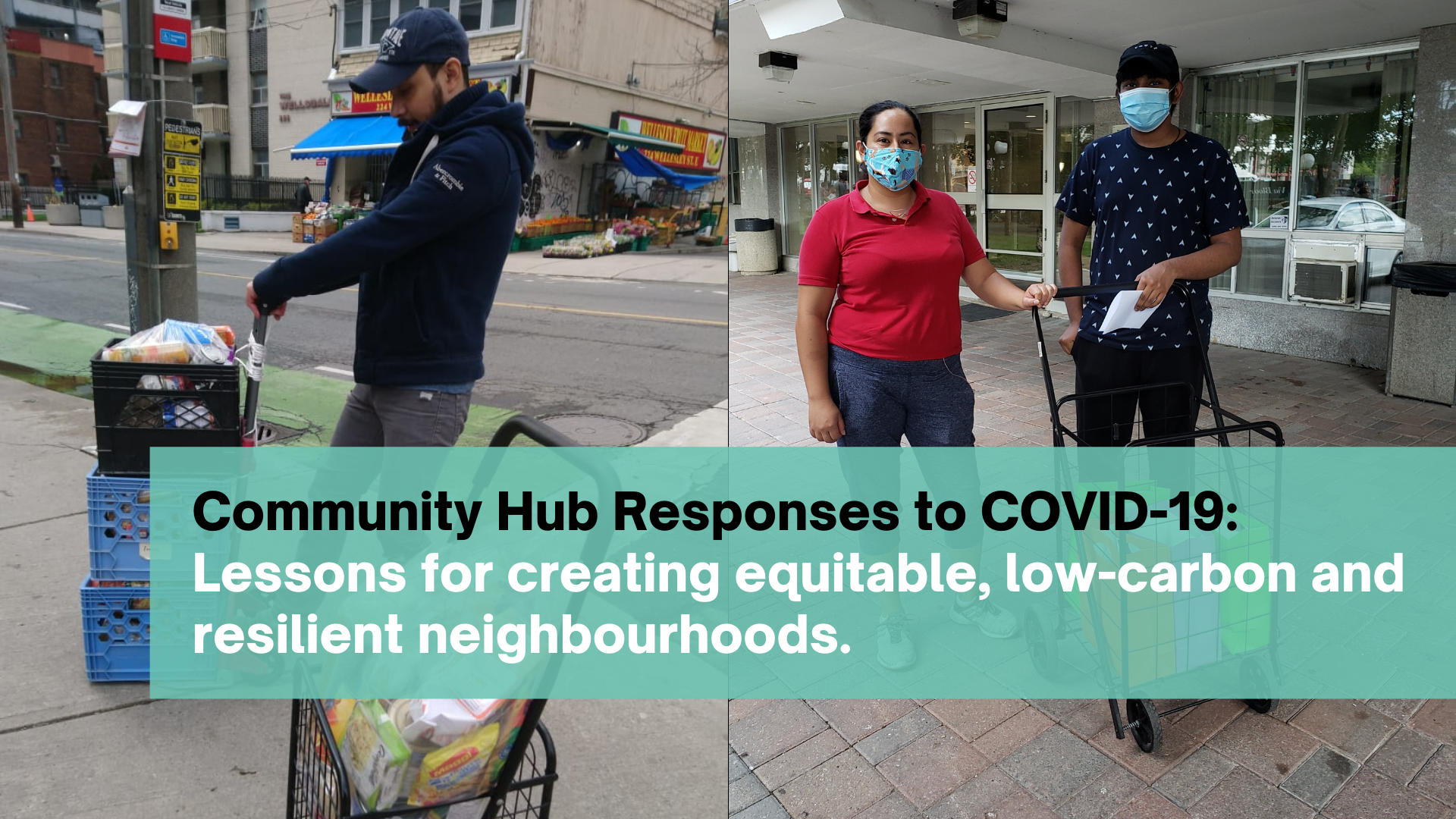 In our first blog in this series, we highlighted the way one organization - the Scarborough Cycles Hub at AccessPoint on Danforth - played a key role in supporting safe mobility, particularly at the beginning of the COVID-19 crisis, through its bike repair hub. This week, we’re looking at another key role that community hubs have been playing during the COVID-19 crisis: responding to the emergency needs of residents in their neighbourhood. These responses have included community agency programs like emergency food distribution and supporting resident and community-led mutual aid networks.

COVID-19 has exacerbated the precarious living situation of many Toronto residents. The economic shock brought on by COVID-19, combined with restrictions on movement and shutting down of vital services, pushed many thousands of people into situations where access to food, shelter, income, health services, and basic social connections was deeply affected.

In our discussions with community hubs and members of our Community Hubs Advisory Group, we learned that community hubs -- often in partnership with resident volunteer leaders -- were quick to respond to this crisis.

They know their communities and have relationships with agencies and funders which enabled them to mobilize resources for support. They also have strong involvement of resident community leaders who were able to activate volunteer networks to deliver essentials like food, medications, and other critical supplies.

Drawing from a community-based approach used in Massachusetts, Parkdale Activity Recreation Centre (PARC) supported the launch of a mutual aid network. In March, Parkdale People’s Economy, a network trusteed by PARC, quickly proposed to the local planning table the idea of building on residents' knowledge and leadership and worked with community members and local agencies to create Mutual Aid Parkdale. The mutual aid network has over twenty neighbourhood “pods” in buildings, along streets, and within ethno-linguistic communities across Parkdale. Meeting weekly, pod leaders coordinate neighbourhood-wide initiatives to build solidarity and support neighbours to reach out to each other to offer emotional and material support. (Learn more and support the Parkdale Pods: Mutual Aid Network)

This is one example of how community hubs and community organizations have built on social networks - with residents, community leaders, agencies, and funders - to rapidly identify and respond to resident needs.

COVID-19 isn’t the only crisis we are facing. Right now, we are facing a climate crisis and the extreme weather that the climate crisis is creating. Building and supporting social infrastructure - strong networks of people at the local level - will be key to ensuring rapid response to support residents most in need in times of crisis. Indeed, it is part of building an equitable and thriving city at both the best - and most challenging - of times. 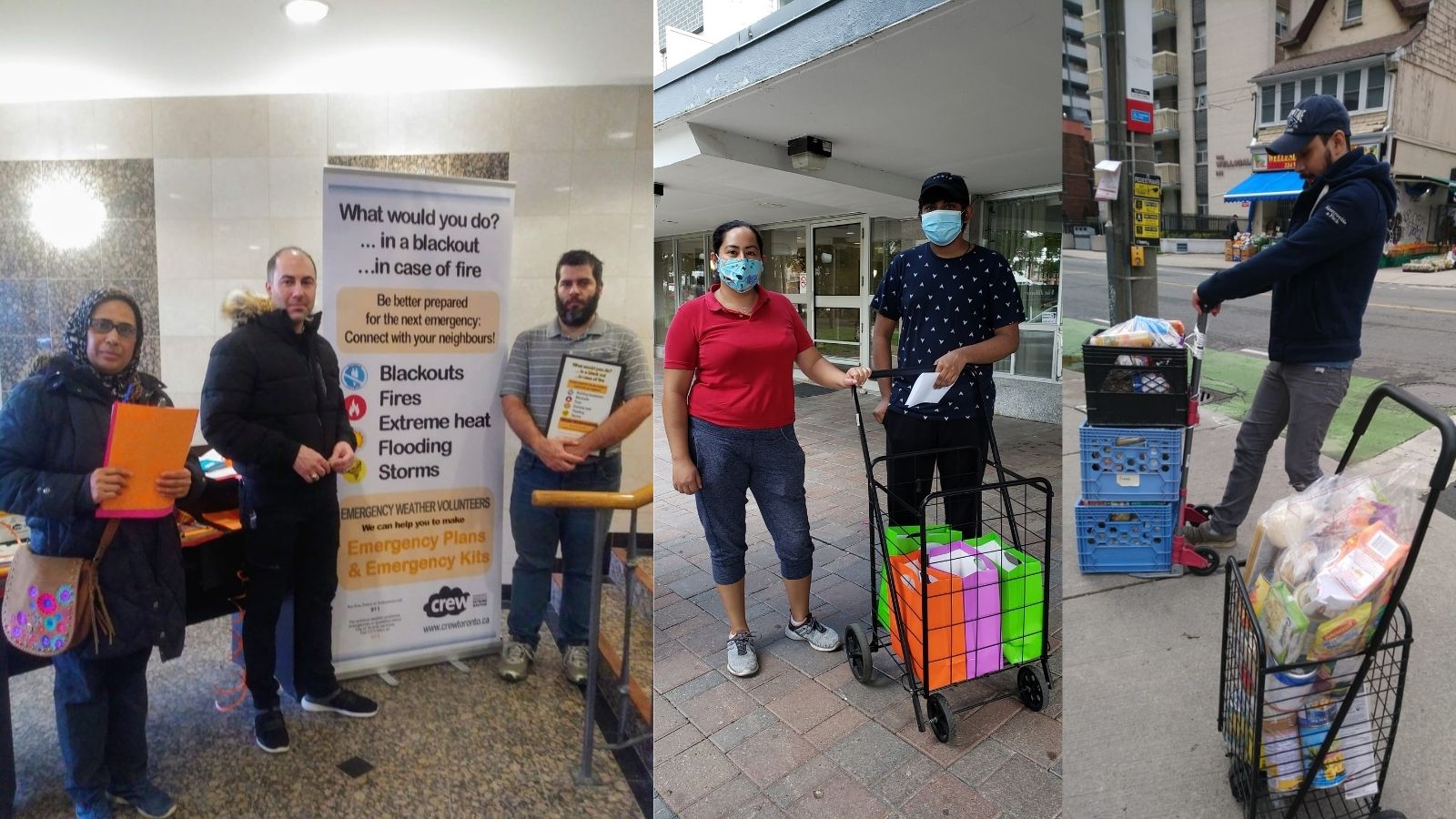 CREW (Community Resilience to Extreme Weather) another member of the Community Hubs Advisory Group, was able to pivot from raising awareness of emergency response to extreme weather to responding to community needs generated by the COVID-19 pandemic. CREW was founded six years ago and has spent three years working with high-rise communities in the St. Jamestown area, bringing awareness to the need for emergency kits and planning. Some of the high-rise buildings they have been working with have had a number of emergencies over the last few years, including fires, burst pipes, flooding, loss of electricity, and extreme heat.

Last fall and early winter, before the pandemic, CREW was able to recruit and train a network of 14 residents as floor captains in a St Jamestown high-rise. The group was connected virtually through WhatsApp.

When the COVID-19 pandemic began, CREW adapted their project to reach out to residents needing food and, as a result, met many isolated seniors. “We noticed that the seniors were afraid to go out and wanted to identify any issues they might have,” said Madelyn Webb, Director of Community Engagement with CREW. "We were concerned that seniors would suffer from the heat as many high-rise buildings did not have air conditioning."

"Early on, we were requested to distribute food by one of the local agencies. Our resident volunteers sprang into action, distributing posters throughout the building with a contact phone number. As a result, we were able to rapidly identify families in need of food. The same volunteers helped transport food to the building and deliver it floor to floor, wearing masks, and maintaining physical distance. One member of our staff reached out and in 24 hours we had 40 names, 40 people that needed food.”

In recent weeks, we’ve talked to and interviewed members of over 20 community organizations and agencies, many of whom have been partnering with TEA on our Accelerating Neighbourhood Climate Solutions Through Community Hubs project. We’ll share our full findings and recommendations to the City of Toronto later this fall, but along the way, we are sharing some key learning and stories of community hub responses.

Read more blogs in this series here or read more about our project Accelerating Climate Action Through Community Hubs.

Thank you to The Atmospheric Fund and City of Toronto for their support.