Competition is on to become Toronto’s greenest residential building 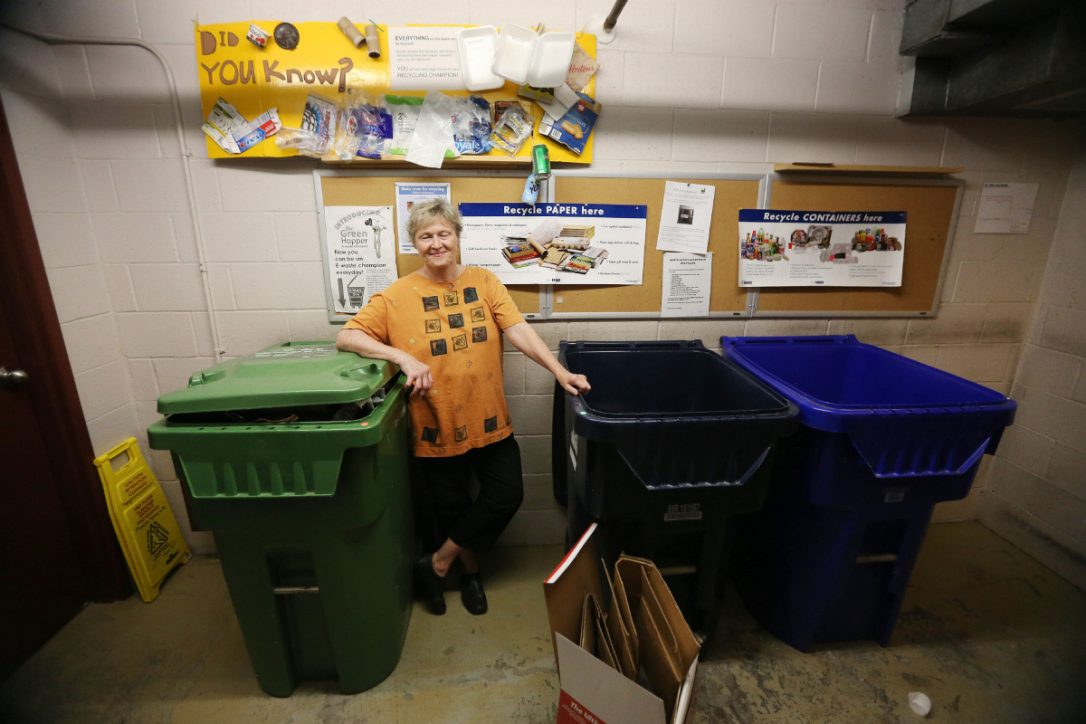 Photo Caption: Shelley Ledger is part of a group in her building that has coaxed residents into increasing recycling and organics disposal.

“We’ll be signing up as soon as possible,” Ledger said as she stood on the downtown building’s lush, green rooftop.

The nine-storey co-op at 550 Ontario St. is sure to be a contender.

It already has an eight-member green committee that oversees a wide range of initiatives, including education programs and games to encourage the 300 residents to recycle and reduce their waste.

Blue bin recycling is up 31 per cent, organic disposal has increased by five per cent and the amount of garbage tossed by residents has dipped by six per cent.

“That’s a very happy story for us,” she said.

Ledger was standing next to Tory on Friday at his news conference to announce the his “Towering Challenge.”

It is aimed at encouraging apartments, co-ops and condos across the city to voluntarily reduce the amount of waste sent to landfill.

Almost half of Toronto residents live in multi-residential buildings, but they recycle and compost only 27 per cent of their waste compared to 65 per cent of waste in single-family homes.

The competition is open to buildings with either private collection or city service.

“We have set a long time ago in the city a goal of diverting 70 per cent of our waste. We have fallen way short of that goal, way after the time it was supposed to be achieved,” the mayor said.

Tory said he was inspired to do something after visiting Mayfair on the Green in Scarborough, a condo leading the way to zero waste.

The building reduced its garbage by 83 per cent over two years by, among other things, allowing the garbage chute to be used for organic waste only. The superintendent also delivers transparent recycling bags door-to-door every Friday.

Mayfair is providing a blueprint for others to help change behaviour, he said.

“We have to do, I think, this as a city to challenge ourselves to take this approach and to change our behaviour,” Tory said.

And while it wasn’t part of the announcement, Tory acknowledged a competition might not be enough.

“In the event that’s not successful we’re going to have to look at other measures that involve using the law and using regulation to cause people to change their behaviour because we simply can’t go on with people producing the amount of waste that they’re producing.”

Emily Alfred, of the Toronto Environmental Alliance, supports a regulatory approach but applauded the competition in the mean time.

“When we have these inspiring examples of people who have done it, it shows it’s not impossible, there are a lot of creative, different ways to do it,” she said Friday.

“Getting an organics composting or green bin system is one of the best ways for a building to reduce the waste rapidly. We hope this will encourage all buildings to do that.”

The alliance is also pleased with the direction of the city’s long-term waste reduction strategy, which will be on council’s agenda later this month.

The city’s public works committee is recommending council ask staff to consult with external stakeholders on the feasibility of requiring all multi-residential, commercial, industrial and institutional buildings, regardless of the collection provider, to develop waste diversion programs.

Back on Ontario St., Ledger and her fellow “green champions” don’t need the regulatory push.

And she has a warning to the building that inspired the mayor.

“We’re going to take Mayfair on.”

The mayor’s challenge will run over a six-month period starting in September.

As Originally Published: Competition is on to become Toronto’s greenest residential building