The first Council meeting of 2017 was only a day long, a rarity at City Hall! One of the most important environmental issues they debated was waste collection service in Scarborough. Council also discussed trees, cycling, and how new legal powers might improve waste diversion in Toronto. Here’s what happened.

COUNCIL WATCH TIP: Ever wonder about the terms and procedures City Council uses? What does ‘hold for debate’ even mean? Check out this great glossary of Council terms by Torontoist!

However, serious doubts were raised about the plan to contract out waste collection services by news reporters, Scarborough City Councillors and TEA’s latest report Protecting Scarborough's Success: How Contracting Out Could Harm Scarborough's Waste Diversion Performance.

TEA's campaign drew attention to the lack of monitoring and enforcement for existing waste collection contracts and how a lack of measurable data couldn’t explain why recycling performance was significantly lower in areas of the City with private waste contracts.

On the floor of City Council, the General Manager of Solid Waste fielded a number of Councillors’ questions and concerns about waste diversion rates and the role of contracted waste collectors.  In a surprise move, Mayor Tory said it was “one of the most contentious issues this Council has faced” and stopped the privatization vote in its tracks. 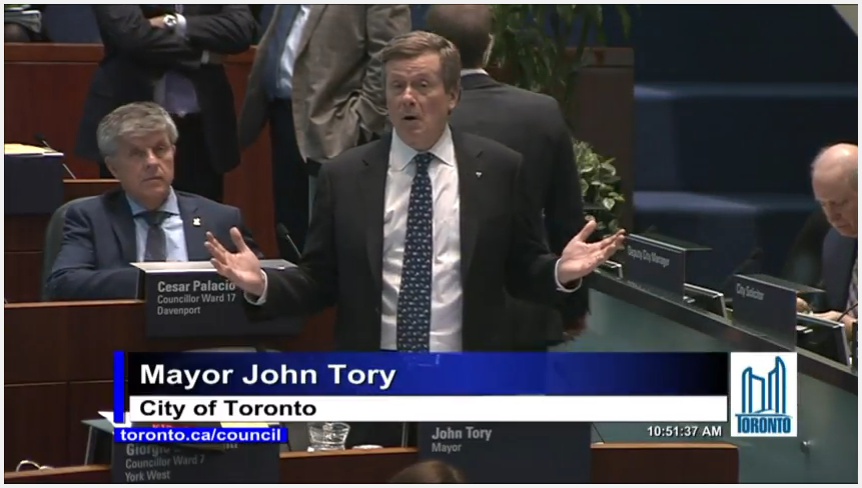 The Mayor acknowledged that there was still a lot of doubt about the merits and drawbacks of contracting out waste collection service in Scarborough, including potential environmental impacts, with Council left having “more questions than answers”. Instead of voting whether or not to privatize waste collection services, City Council voted on a new motion written by the Mayor that puts off the privatization vote until the next election. The vote won with a strong majority (40 to 4), with only four Councillors voting against the motion: Gary Crawford, Michael Ford, Stephen Holyday, Jaye Robinson.

Instead of privatizing waste collection, City staff will undertake additional research on the topic as well as make improvements to monitoring and enforcement, collect better performance data, and improve waste diversion services across the City. Read more about why TEA considers this vote a major victory for the environment.

View the full decision and the vote record here.

If a tree falls in Etobicoke, does the rest of Toronto hear it? The Etobicoke-York Community Council is interested in seeing changes to Toronto’s tree policies. In particular, they would like to have final decision making authority about cutting down specific trees in their district instead of leaving the final decision to City Council. Despite its local ‘roots’, trees provide significant environmental benefits to the entire city. A number of Councillors spoke out against the idea of delegating authority to local community councils and Councillor Glenn De Baeremaeker suggested the Director of Urban Forestry might be best placed to make the decision. A report on various options will be written and presented to Executive Committee in the near future.

View the full decision and the vote record.

While discussing the provincial government’s proposed changes to the Municipal Legislation Act (Bill 68), Councillor Janet Davis introduced an opportunity that might provide the City of Toronto with more legal power to build a zero waste city! Davis passed a motion with unanimous support from Council, that will require the General Manager of Solid Waste to report back to the Public Works and Infrastructure Committee on legal options to expand recycling and composting requirements for all buildings in Toronto from apartments and condos to institutions and businesses.

View the full decision and the vote record.

Thanks to a member motion by Scarborough Councillors Paul Ainslie and Glenn De Baeremaeker, Toronto City Council demonstrated their support for the National Cycling Strategy Act. This Act is being considered by the Federal Government and could have widespread benefits across Canada including increased investment and better transportation planning across departments and levels of government.

According to the Councillors’ request: “This legislation is unlike other attempts to support cycling as a preferred method of transportation as it is accompanied by an unprecedented investment in infrastructure. There also seems to be a more widely spread appreciation for the central leadership role that the Federal Government can play by coordinating with the provinces and municipalities. This Bill could help spur further investment of active transportation infrastructure and street redesign at the municipal level”.