From flooding to stormwater fees, transit to trees (and of course our new climate action plan), a range of environmental issues have been on the minds of City Councillors this month. 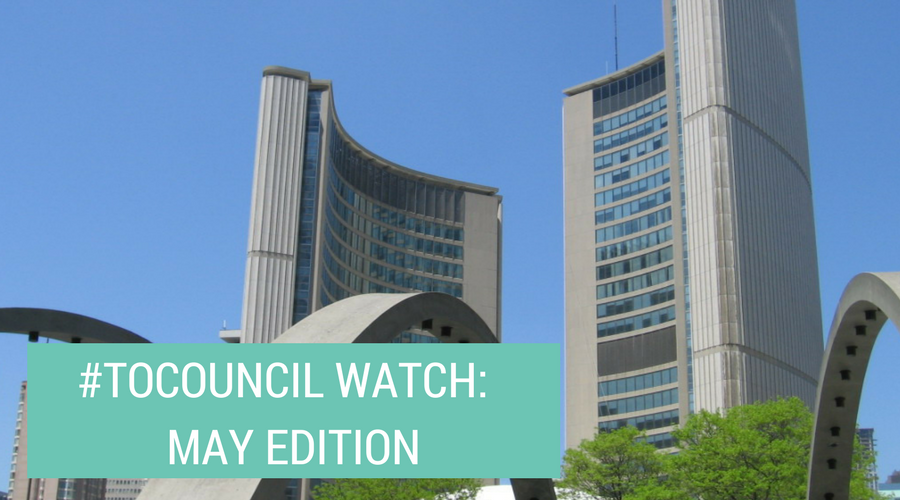 In May, the Parks and Environment Committee unanimously adopted TransformTO, Toronto's highly anticipated climate action plan to get our City's emissions down by 80% by 2050. Read more about what TEA likes in the TransformTO plan in our Climate Campaigner's blog post.

At Committee, Councillor Layton tweaked the climate plan recommendations to make sure the City was integrating climate action into all aspects of their business operations, pursuing funding opportunities at other levels of government and consulting with Toronto's aboriginal community to bring traditional knowledge and solutions into the plan.

Despite a 3-day marathon meeting in May and public support for Toronto's new climate strategy, City Council decided to delay the vote on TransformTO until their July 5th meeting.

While at the Chicago Forum on Global Cities recently, Mayor Tory said he plans to support the plan at Council, yet the media is reporting that the Mayor also wants to “prioritize” which climate actions Council adopts first. This could present a problem. To achieve an 80% reduction in emissions by 2050, all of the actions in Toronto's climate action plan must be implemented.

Lake Ontario water levels are at a 20-year high, which is causing extensive flooding and erosion. The extent of the damage and costly repairs is still unknown but City Council has asked City staff to report back at the next meeting in July with details on the extent of the damages, a repair timeline and how to prevent further damage in the future. They will also hoping for some relief funding from the federal government. Learn more

The stormwater charge Toronto Water has consulted on for years is officially 'dead in the water'. Despite years of research and consultation, and the leadership of neighbouring GTA cities to tackle the rising costs of stormwater management, Toronto City Council has decided to drop the idea all together. The stormwater charge was a more equitable model that would charge properties the actual cost of managing rainwater runoff instead of charging for it as a hidden fee in our tap water costs. It would have rewarded sustainable solutions like rainwater collection and permeable surfaces and significantly reduced the price of our water rates.

By sticking with the status quo, large properties that don’t use tap water but produce massive amounts of stormwater (like sprawling parking lots and storage centres) won’t have to pay a dime to Toronto Water. Those who do pay for water use, and could have seen a reduction in our water bills, are the obvious losers in this equation.

Basement flooding in Ward 25 got some extra attention at City Council this month. There are concerns with pedestrian safety as well as how construction for flood prevention can be done in a way to minimize the impact on trees in the neighbourhood.

The main topic of debate at the last Council meeting was the new Downtown Relief transit line, which is desperately needed to take the pressure off the jam-packed Bloor and Yonge subway lines. Despite many motions from Councillors and some edits (like keeping the door open to a lower cost Light Rail Transit option), Toronto City Council was unified in their resolve to get Toronto moving.

Our city has a 10 year bike plan to build a well connected network of cycling routes across Toronto. City Council voted to add some new bike lanes this year, but Cycle Toronto points out that some key streets scheduled for bike lanes in 2017 are yet to be announced and not enough protected bike lanes are ending up on the main streets where most people ride.

More (private) trees please! The City of Toronto will be funding two non-profit organizations, LEAF and Toronto Parks and Trees Foundation, to support their efforts to increase the number of trees in our city that grow on private property like residences and businesses.

In May, the Parks and Environment Committee got an update on the City's Pollinator Protection Strategy since bees and butterflies continue to decline in Toronto. They also decided next steps on how to implement a water bottle policy for city parks that increases access to refilling stations for tap water and eliminates the sale of single-use bottled water.

At their June meeting, as part of the City's indigenous reconciliation efforts, Councillor McMahon put forward a motion to address the need for Indigenous place making in our City parks starting with the initiatives outlined in the 10-year Capital Plan.