At November's City Council meeting a number of green topics were on the agenda including expansion of both our transit system and our political system, climate strategies to prepare us for extreme heat and catastrophic floods, climate change solutions like growing our tree canopy and tackling our industry's trucking emissions. Here's what happened. 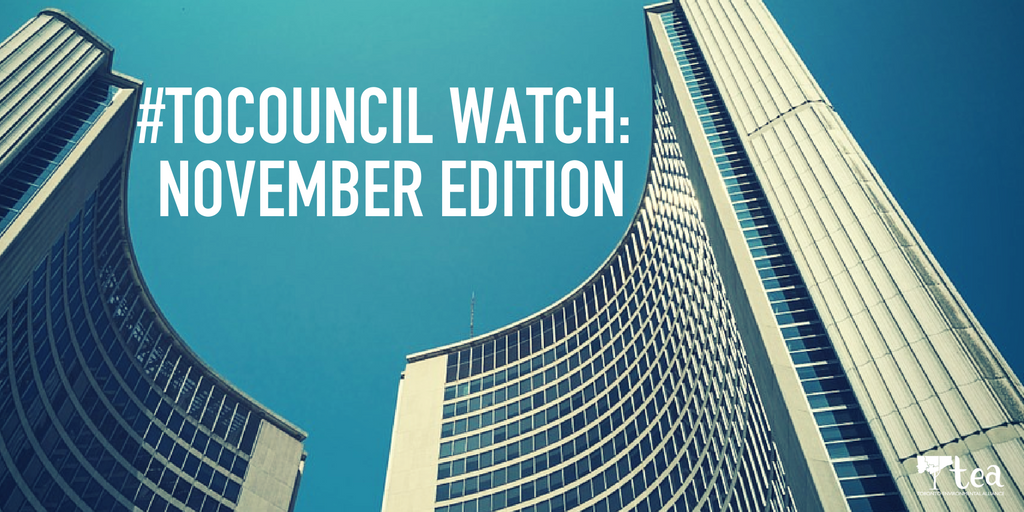 The Mayor’s Key Matter at City Council was none other than SmartTrack, which is John Tory’s proposed transit plan. After many hours of debate in Council Chambers on Tuesday, the majority of Councillors voted to approve a multi-billion dollar transit funding agreement that includes funding from the City of Toronto, the provincial government and Metrolinx. The transit plan includes adding new stations along GO rail lines and extending the Eglinton LRT. Questions remain about how the City will find the revenues to pay for their portion of the costs and whether the City gave up too much in its negotiations with the Province (eg. losing funding for LRT operations). There are significant concerns that the untested and unreliable ‘tax increment financing’ mechanism will fail and result in a property tax increase to cover the budget shortfall.  Learn more by reading the SmartTrack staff report.

Climate change has led to severe weather fluctuations that impact our city. Instead of planning for a 100-year flood, we now have to prepare for floods of this magnitude on a regular basis. Taking measures to protect low lying areas of our city like the Port Lands and Leslieville from flooding from the Don River just makes good business sense. A recent report on the Port Lands Flood Protection project suggest that for every $1 invested in flood protection, we can avoid $5 in flood-related property damage! The City of Toronto is currently scrambling to figure out how to pay for this $1.25 billion dollar project and they’re banking on the provincial and federal governments to help.

In other climate news, our city has been facing more and more heat warnings in the summertime and this puts vulnerable people at risk. TEA has shown support for the request by social justice groups to open cooling centres on the first day of a heat alert instead of waiting for three consecutive days to open up this critical public health service to Torontonians in need. This month City Council agreed to consider increases to Toronto Public Health’s cooling centre budget next year in order to cover the costs of keeping these 7 centres open for all heat warning days (approximately 20 per year).

A key source of greenhouse gas emissions in Toronto is from our transportation sector. As a city that prides itself in having a wide range of food and beverage manufacturers, it is exciting to see efforts being made by our Economic Development department to tackle this industry’s transportation footprint. By moving more of their raw materials and products from trucks to trains, they can save money, reduce greenhouse gases and toxic diesel emissions, as well as reduce congestion on our roads!

Toronto’s urban forest is not only something we cherish and protect, it’s something we want to see grow! Toronto’s tree canopy currently covers about 27% of the city (about 10 million trees) but our goal is to reach 40% canopy cover. As noted in the recent staff report, planting trees on public property won’t be enough to reach the 40% mark - private properties will need to join the effort! This month, City Council asked Parks, Forestry and Recreation to develop a Tree Planting Strategy that will grow our tree canopy across the city and set up an Urban Forest Working Group with key stakeholders to help raise the money needed to actually implement the work.

As the budget debate rolls around at City Hall, there’s been talk of selling off public assets like Toronto Hydro to raise some money. At the November Council meeting, Councillors Perks and Davis demanded an inquiry into two consulting firms hired by Toronto Hydro to better understand the scope of their work and what relationships these same consultants may have at City Hall. It is unclear if this information will be made public in time for the sell-off debates that will take place at the December 1st Executive Committee meeting and December 13th City Council. TEA has joined the Our Hydro coalition to send a clear message to decision makers that we don’t want private interests involved with Toronto Hydro. Read more on our blog.

It’s been 16 years since the City of Toronto’s 44 wards were drawn on a map. Our population has grown by almost half a million people since then and as you might guess, this led to significant growth in some wards more than others. To fix existing and projected imbalances in the number of people represented by each City Councillor, our government has voted to expand to 47 wards in time for the next election in 2018.

For TEA, what’s most important about this decision to increase their ranks rather than simply redraw the existing 44 ward boundaries is that Torontonians and their local communities will continue to have adequate representation in their municipal government (with an average of 61,000 people for every Councillor). TEA regularly encourages residents across Toronto to connect with their City Councillors because they have the power to influence government decision-making on environmental issues.

Appeals of the ward boundary decisions are possible at both the Ontario Municipal Board and Divisional Court. The by-law to adopt ward boundary changes and conclusion of any/all appeals must take place no later than December 21, 2017 otherwise, they will miss the deadline and the ward boundaries won’t be changed until the following election in 2022.

In other Councillor news, there will be a by-election in February to fill the Ward 42 Scarborough-Rouge River seat vacated by Raymond Cho.
PUBLIC TRANSIT CITY HALL CLIMATE CHANGE
Do you like this post?