The guides were produced in association with the Friends of the Greenbelt Foundation, and are initially being distributed through Toronto Public Health offices throughout the city.

Each guide breaks the city down into six areas, and for each area a list of retailers who provide locally grown ingredients and a map that highlights the location of each retailer are given. The guides also list farmers' markets and on-farm markets supplying the culturally relevant ingredients. 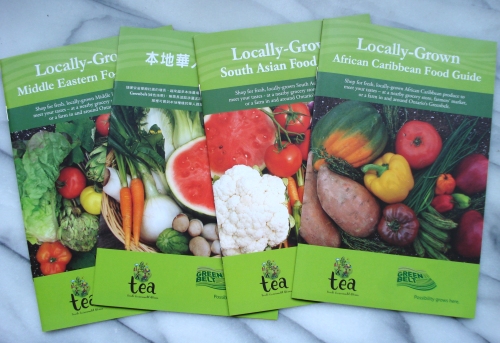 So, for example, the African Caribbean guide includes a list of retailers that sell locally grown products such as okra, calaloo, sweet potatoes, and goat in areas such as Scarborough, Etobicoke, North York, Downtown East, Downtown West etc.

I was fairly impressed with the level of detail in the guides, and the work that would have gone into developing them. From compiling a list of culture-specific ingredients, then finding out who grows them here in Ontario, and then finding all purveyors that carry them - it would have taken considerable time and community outreach to get it done.

Because of the diversity of languages spoken in geographic areas covered by the guides, it was decided that the South Asian, Middle Eastern and African/Caribbean would be written in English. The Chinese guide is only available in Chinese, mainly due to the fact that research showed this to be the preferred language. But what about the people who want to cook Chinese foods with local ingredients but don't read Chinese?

Hard copies of the guides are currently only available at Toronto Public Health offices (rather than in places that actually sell food). Another option is to download soft copies of them online on the TEA website. They're also working on distribution through high schools with the help of their youth caucus

With a stack of other local food guides to compete with, the TEA is trying to distinguish itself with a cultural (and very Toronto) twist. So save a tree and check them out online, or call 416-338-7600 to find out where you can get hard copies of the guides in your neighbourhood.