Emily Alfred, TEA's Waste Campaigner, wrote this article as part of a special feature on waste in the Toronto Star. 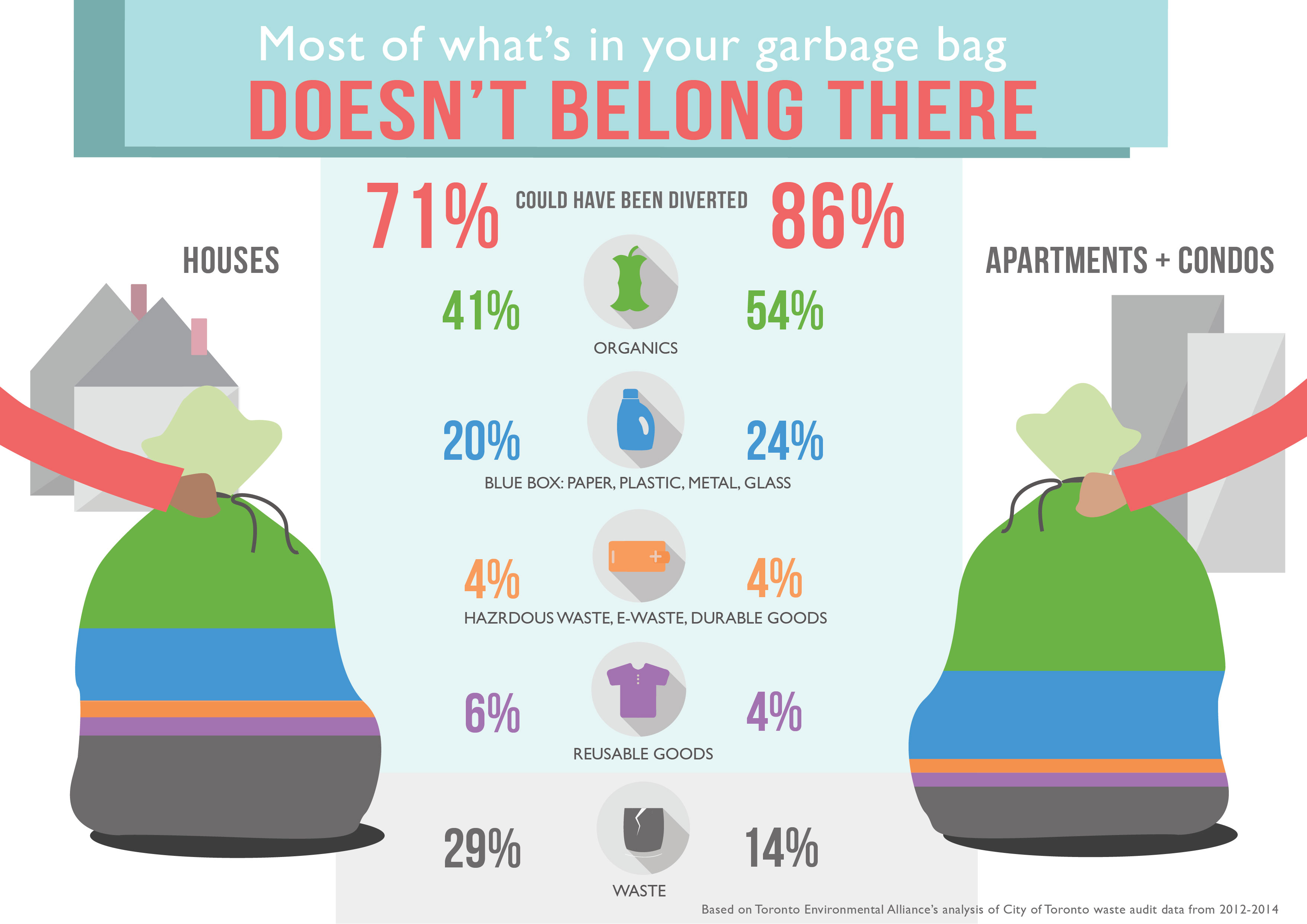 Every year Toronto residents put roughly 1 million tonnes of waste out for the city to collect. Just under half is disposed in landfill, and 53% is diverted from landfill and sent for recycling or composting in the Blue Box and Green Bin.

At the Toronto Environmental Alliance, we started wondering – why is our diversion rate so low?

Every few years Toronto's Solid Waste department perform audits on residential waste, and we took a look at their numbers. Their studies show that 85% of waste from the average household could be recycled, composted or otherwise diverted from disposal using existing Toronto waste programs.

Toronto has a full range of systems and programs to keep things out of landfill, from Green Bins to electronic waste collection, to a Toxic Taxi that picks up hazardous waste and a transfer station that dismantles mattresses for recycling. Residents learn about these programs from annual recycling calendars, an educational website, TTC ads, and a web-based tool called the Waste Wizard.

Too many recyclables in the garbage bag

Looking more closely at the City’s numbers, we found that though most people use the Blue Bin and Green Bin, they’re still throwing out recyclables and compostables in the garbage bound for landfill. In fact, there is more recyclable and compostable material in a garbage bag than actual garbage.

But the picture isn’t much better for people who have Green Bins and Blue Bins that are picked up at the curb. Roughly 70% of what’s in their garbage bins shouldn’t be there.

So, what does this mean - if faithful users of the Blue and Green Bins are still getting it wrong, are we asking too much? Is it unrealistic to push for higher diversion rates?

The answer, thankfully, is no, and we’ve got an example right here in Toronto that proves it.

In the world of waste reduction, high rise apartments and condos are an especially difficult nut to crack. High-rise buildings frequently have lower diversion rates than houses, and this is the same in Toronto. There are many theories why - from building design and easy access to garbage chutes, to lack of green bins, inadequate education and language barriers.

But, in the northern corner of Scarborough, a high-rise building in Malvern is showing that not only can high rise buildings divert more of their waste, they can divert more than most houses. Mayfair on the Green, a 283-unit condo with over 1,000 residents, is diverting over 80% of their waste, putting out just one dumpster of garbage per month.

This isn’t a flashy new green condo, showcasing the latest in sustainable technology. This is a typical Scarborough high-rise condo, 25 years old, and with a single garbage chute.

TEA staff and volunteers visited the building to find out what made this building so successful at reducing, reusing and recycling their waste, and the answer is refreshingly simple: dedicated staff and ongoing education. 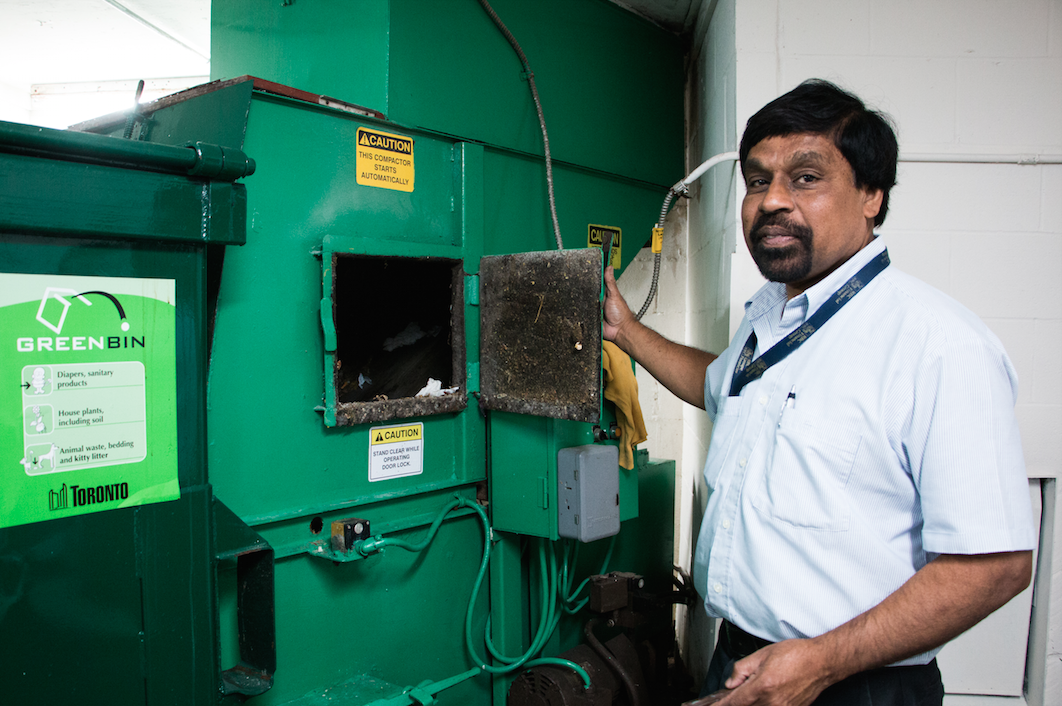 Superintendent Princely Soundrayanagam shows where the building's Green Bin waste is collected from the organics chute.

How 430 Mayfair on the Green got so green

Princely Soundranayagam has been the building’s superintendent for over 15 years. He saw a big opportunity to reduce waste using the City’s existing diversion programs. He also knew that diversion actions had to be simple for residents to use them. With full support of the Building Manager, Ed Lynn, Princely began distributing flyers, and going door-to-door to talk with residents about new recycling and waste systems in the building.

The building’s garbage chutes are now used exclusively to collect organics and food waste. Residents drop off recycling and garbage downstairs, where they can also recycle electronic waste, cooking oil and hazardous waste like cleaners, batteries and old paint.

Residents place old household goods, books and clothes they no longer want on a designated sharing shelf. If another resident hasn't taken it within a few weeks, the goods are donated to a charity.

The efforts have paid off: the building used to spend over $1,500 a month on waste collection, but their recent bills have been under $150, dropping the annual waste costs by thousands.

This success story is about more than just a few recycling signs and more bins, it’s about creating a culture of waste reduction. Plentiful signs (in many languages) and regular feedback to residents ensures that everyone has the information they need. The staff practice what they preach - the office and shared library are furnished with reused furniture, books and plants. Building staff and residents are proud of what they’ve achieved - sharing the success (and the savings) is a key part of keeping the momentum up.

430 Mayfair on the Green is not the only high-rise building with higher diversion rates, but it is far ahead of the pack. They’ve shown that people succeed in diverting waste when it’s easy, when they see and understand the benefits, and when they have ongoing education and support to keep improving.

What does this mean for Toronto

With a growing waste problem and dwindling landfill space, Toronto is developing a Long Term Waste Strategy to determine what to do with our waste over the next half century. Some think that we need to look at expensive disposal technologies, like burning our waste, or building another landfill.

The Mayfair on the Green example shows another option. The good news is that we already have the diversion programs in Toronto to drastically reduce our garbage, and to get on the path to 85% diversion. What we need now is to learn from and share the success of buildings like Mayfair on the Green, that are showing that high diversion rates are within reach. 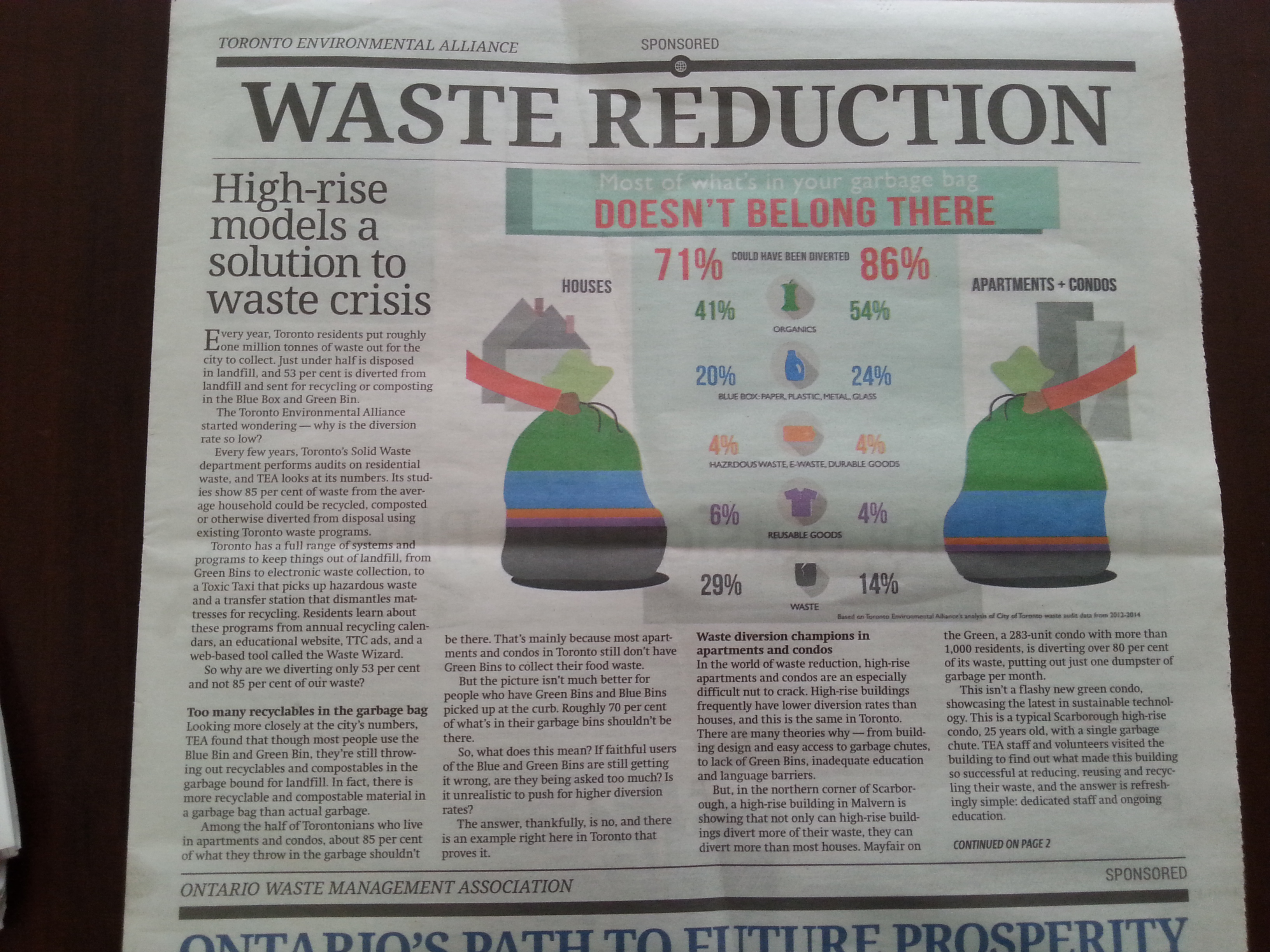