How Did Your City Councillor Vote?

How did your current Councillor vote on key environmental issues in the last term? Our vote record holds your Councillor accountable for their decisions and gives you information to help you decide who to cast a ballot for. 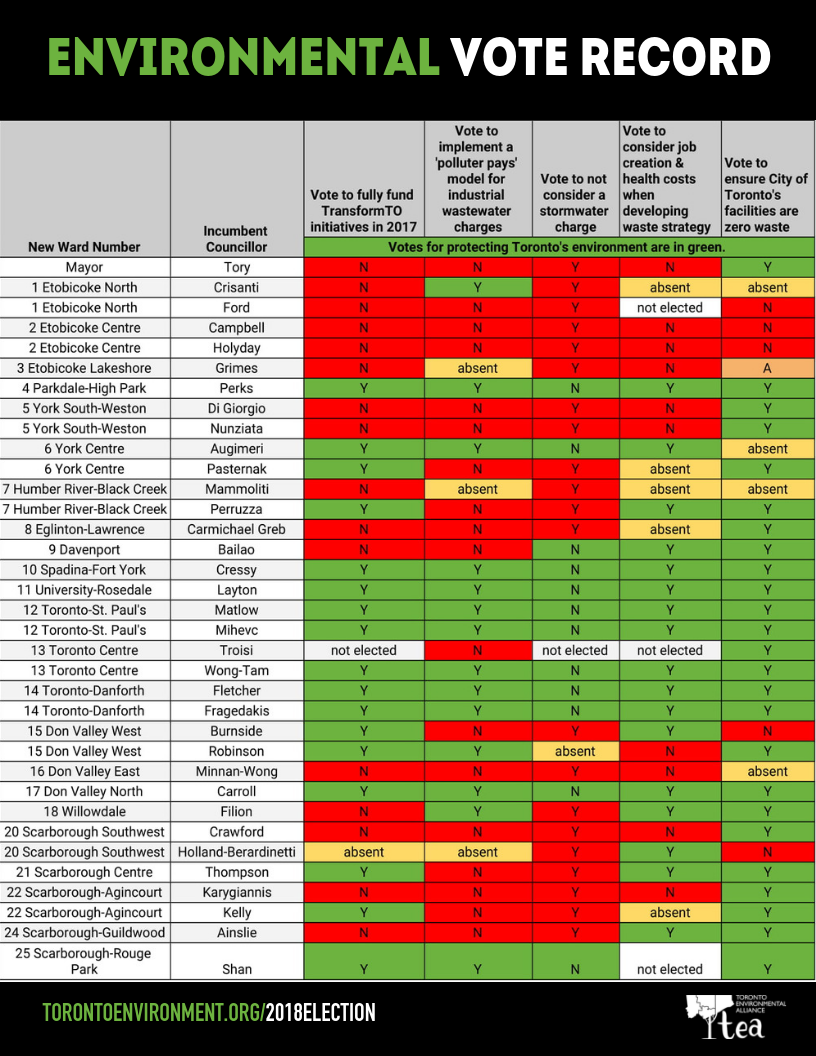 This vote record was created based on 5 key environmental votes on climate change, pollution and waste.

In February of 2017, just weeks after adopting Part 1 of the TransformTO climate change action plan, Council narrowly voted against allocating $1.6 million in full funding for the strategy. Instead, only $333,000 was passed for funding the plan in 2017. The plan faced another setback in the 2018 budget cycle where it was partially funded again. Council funded $2.375 million instead of the $6.7 million dollars required in 2018. City staff cited* the partial funding in 2017 as the key reason behind their reduced ask for 2018.

The water department (Toronto Water) sets the cost of water supply, but it also provides many services like water purification, sewage treatment and industrial wastewater pollution prevention. In what has become an annual tradition, Councillor Layton once again tried to hold companies accountable for the full cleanup costs of wastewater pollution rather than ask residents and competing businesses to pay the $1.6 million bill. He put forward a motion to fix the formula so that the City would charge industrial wastewater customers the true cost of treatment. This was the closest vote in all the years Councillor Layton has put it forward, which lost on a 20-20 tie.

Vote to not consider a stormwater charge

Despite years of research and consultation on introducing a stormwater charge in Toronto, City Council voted to shelve the idea. Rather than moving forward and developing a plan, Council voted to receive the staff report and take no further actions. Although stormwater charges have been adopted by many neighbouring GTA cities to tackle the rising costs of stormwater management, there has been a serious lack of leadership on this issue in Toronto. Introducing a stormwater charge would have made paying for the costs more equitable by charging properties the actual cost of managing rainwater runoff instead of charging for it as a hidden fee in our tap water costs.

In 2015, City Council voted on the vision and criteria that would be used to develop the City’s new Long Term Waste Strategy. This strategy is critical for setting priorities for waste policies, programs, services and infrastructure investments for the next 30-50 years. The list of criteria passed during this vote included financial, environmental and social impacts to be considered when evaluating different options. Councillor Layton put forward a motion requesting that two additional criteria be added to the list: 1) employment opportunities and 2) estimated health care costs. This vote passed, which ensured that the new Long Term Waste Strategy for our city was ruling out waste management solutions that could impact our health like incineration or limit job opportunities.

Vote to ensure City of Toronto's facilities are zero waste

When passing the 2018 Solid Waste Budget, a number of important motions came forward that directed Solid Waste Management staff to do more to prioritize waste reduction initiatives like reuse, recycling and composting. One contentious vote was a motion put forward by Councillor McMahon for the City to lead by example and ensure that all City-owned facilities were striving to be zero waste. TEA had uncovered that many City-owned buildings don’t even offer recycling and composting bins, so this motion (which we won) was important to improving the public’s access to waste diversion services.