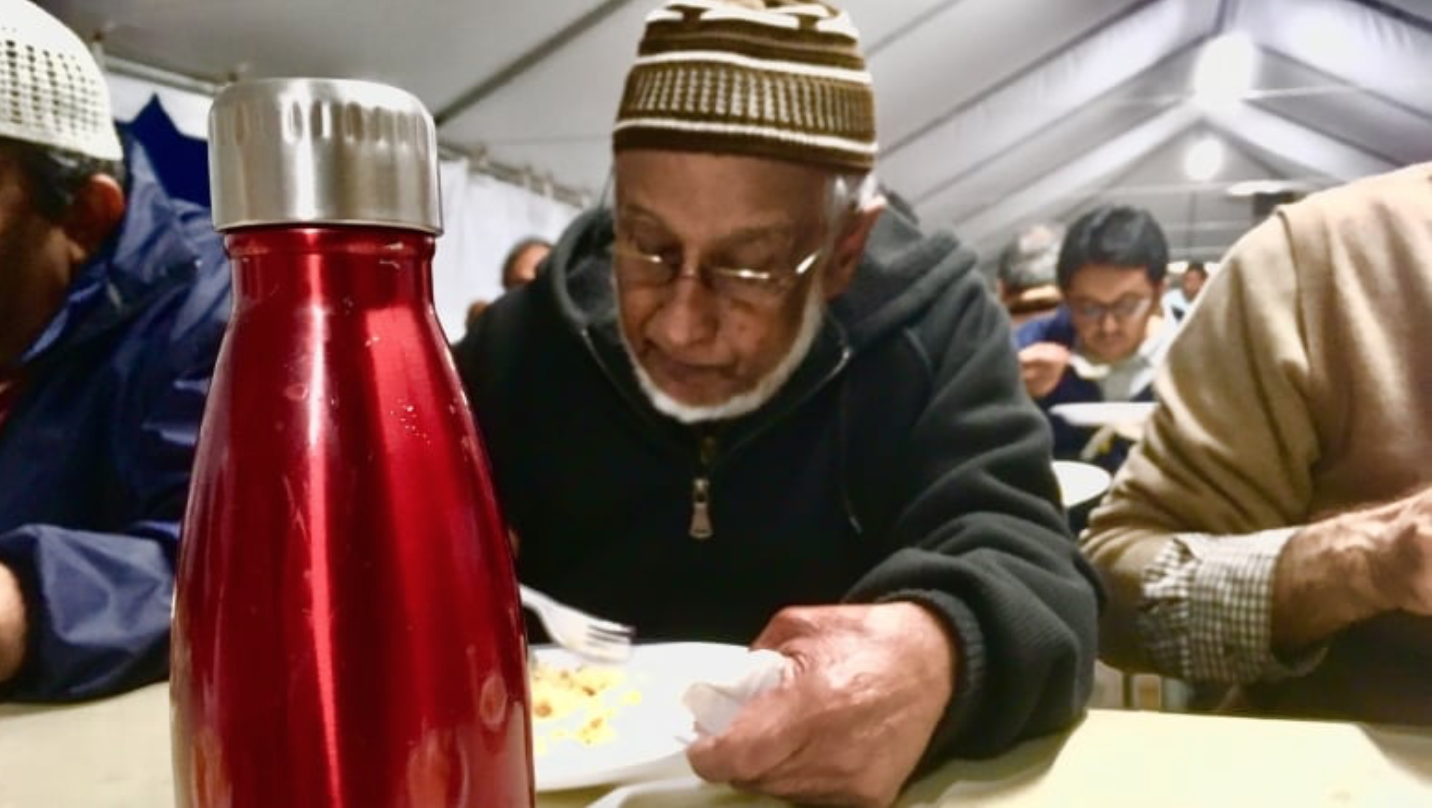 Waste Free Ramadan encourages people to bring their own reusable water bottles to the Islamic Institute of Toronto to reduce waste. (Ivan Arsovski/CBC)

A Scarborough mosque is going green during the month of Ramadan by cutting back on its consumption of single-use plastic.

The Islamic Institute of Toronto is participating in Waste Free Ramadan, an initiative that bans plastic water bottles from being used or distributed at the mosque. Instead, worshippers are encouraged to bring reusable bottles, which they can refill at various water coolers and dispensers located throughout the building.

Waste Free Ramadan is part of a larger campaign that encourages people to go waste free. IIT has joined more than 30 mosques across the Greater Toronto Area that have taken part since it launched in 2017.

"Finally" was the first thing 21-year-old Zainab Hamed thought when she found out about the initiative.

"When I first heard about it, I thought it's about time that we introduce something like this," said Hamed, who has attended IIT for most of her life.

The University of Toronto student has carried her own reusable water bottle around since she began her studies three years ago.

"You can't find water bottles on campus," she said. "So I personally feel like this is something that was overdue."

During Ramadan, Muslims abstain from eating and drinking from sunrise to sunset. Typically during this month, around 5,000 worshippers attend the Islamic Institute for iftar (the breaking of the fast) and night prayers on a weekly basis.

Fareed Amin, chair of the Islamic Institute of Toronto's board of directors, said that at least 25,000 plastic water bottles are used at the mosque during this month. So, Waste Free Ramadan is a way to reduce its carbon footprint.

"I think we're seeing more and more evidence coming to light of the importance of taking action now to address those issues of climate change," said Amin.

Additionally, he said Islam encourages people to be more environmentally conscious, so the policy ties in well during Ramadan, which is a time for spiritual reflection for many Muslims.

This is only the first step in a larger campaign for the Islamic Institute, which hopes to ban single-use plastic entirely.

"It's not only single-use plastic bottles we're concerned about, but also about serving individuals in biodegradable food containers as well," said Amin.

Though the initiative started out during the month of Ramadan, Amin hopes to see it continue year-round.

Emily Alfred from the Toronto Environmental Alliance says one way governments can reduce waste is by making companies bear the cost of recycling the materials they produce. (Submitted by Emily Alfred)

"I think this is a great story about a community making a decision to go waste free and then making some small changes that can have a big impact over the long term," said Emily Alfred, a spokesperson for Toronto Environmental Alliance.

Alfred said the Waste Free Ramadan initiative is a good example of a community stepping up to do its part to be more environmentally conscious. According to a discussion paper released by the Ministry of the Environment in March, each person in Ontario produces nearly one tonne of waste per year.

In order to eliminate waste in the long run, Alfred said governments should implement policies that put the burden of paying for recycling on companies.

"When you hold producers responsible for ensuring that what they sell and make gets recycled, now they have an incentive to ensure that the products they make are easy to recycle," she said.

Meanwhile, Amin said mosque leadership hopes their policies will encourage their congregation to be more cognizant of their plastic use in their own households as well.

"We have a lot of individuals from different parts of the world, where practices are different," he said. "So creating that awareness and creating that opportunity for people to make a difference is what this is all about."