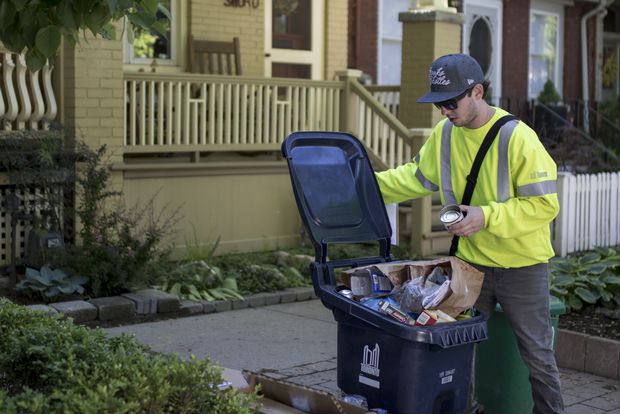 Kyle Oliver checks recycling bins along Sword Street as part of a City of Toronto recycling initiative in 2017. (NICK IWANYSHYN/THE GLOBE AND MAIL)

Changes in the market for recycled materials could cost the City of Toronto $9.2-million by the end of the year, a report to city council’s Public Works and Infrastructure Committee says.

The city’s rate of contamination in recyclables is expected to rise from 25 per cent of all material in 2017 to 27 per cent in 2018.

On Jan. 1, China, the world’s largest market for recycled material, began imposing strict new standards on the contamination of materials it buys. Contaminated recyclables − including paper splashed with coffee or pizza boxes soiled by grease − can only account for 0.5 per cent of the recyclables.

Other markets around the world also have tightened their policies.

“It’s got to be cleaner than it was before,” said Jim McKay, general manager of Toronto’s solid-waste management services. “China took so much [of the recycling] in the world, that markets that used to exist can be much pickier − getting really clean material for much less money than before.”

As the markets change, Toronto will have to look elsewhere to sell its recyclables. Managing the increasing contamination will cost the city $4-million. The financial impact of the declining revenue accounts for $5.2-million.

Under the current producer-accountability program in Ontario, the companies that produced the recycled plastic will have to cover up to half of the cost. But there’s a two-year delay before the city can get its payment.

In 2017, the city made about $16-million in revenue from selling recycled materials.

Last fall, the city began blue-bin inspections to combat the rise in contamination. Before the truck comes to pick up the recycling, a group of inspectors will walk down the street and check bins for contaminating materials, such as clothing, food, or even wood.

Any bins containing contaminated recyclables are pushed back from the road and left with a note listing what can and cannot be recycled.

The second time a bin is pushed back, the city will leave a note telling them to “clean up,” said Mr. McKay.

It takes six months for the bin inspectors to cover the entire city once, but Mr. McKay said areas with high contamination rates are visited more frequently.

“We’re really asking residents to be more diligent before they throw it in the bin. Don’t throw black plastic or coffee cups into the bin,” said Mr. McKay.

Organics have proven especially difficult: If there is residual peanut butter left in a jar, for example, it can contaminate all of the paper it comes in contact with.

The city has also been trying to educate and encourage residents to become better at recycling through advertising the things that are and are not acceptable in a blue box.

“Toronto has one of the most comprehensive systems in Canada,” said Emily Alfred, the waste campaigner for the Toronto Environmental Alliance. But she thinks the city could do more, such as putting regulations on difficult-to-recycle plastics, like black plastic.

Mark Badger deals with much of Toronto ’s recycling. Mr. Badger, the executive vice-president of Canada Fibers, called the change in markets the “purity tsunami.” Canada Fibers is one of the companies responsible for processing Toronto’s recycling, as well as 60 per cent of all recycling in Ontario.

Blue-bin recycling accounts for 900,000 tonnes of recyclables per year in Ontario, bringing in between $70-million to $90-million in revenue for municipalities across the province.