On Thursday, Glen Murray, Minister of the Environment and Climate Change announced a new round of public consultations focusing on how to reduce greenhouse gas pollution and get Ontario ready for climate change. 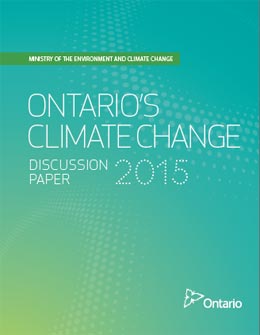 This is a welcome step. But one fact that needs to be kept top of mind as people prepare to talk to the Province is that cities are vital to this discussion, a point TEA and other urban-focused environmental groups made in a media release.

Public consultations will be held in Toronto on February 24th and 25th. Details are available at the Ministry of Environment website and TEA will soon be posting exactly what it plans to say. For now, here are some thoughts about the Discussion Paper released to guide public consultations.

Sadly, the Discussion Paper remains virtually silent about the important role cities play. It remains silent on the fact that most of the actions that create greenhouse gas pollution are associated with activities that take place in cities. Nor does it acknowledge that severe weather (that climate change causes) has an especially devastating impact on the infrastructure we rely on in cities (sewers, electrical systems, transportation systems, ravines, trees, etc...). And the fact that 85% of Ontarians live in urban areas is buried deep in the paper.

Here in Toronto, it's clear Queen's Park and City Hall have yet to realize how much they need each other. Look at what's happening on the transit file. The Provincial Discussion Paper notes burning gasoline for driving accounts for about 20% of greenhouse gas pollution produced in Ontario in 2012. So, you would think the Province would do everything it could to help cities choking in traffic congestion, like Toronto, get people out of their cars and on to the TTC. While the Province has come to the table with money to build new transit lines, it remains steadfastly opposed to helping the TTC improve services on existing lines by contributing more to annual operating costs. Just last month, it refused to provide additional provincial dollars to help Toronto improve TTC services.

Solving the transit problem in Toronto is, in reality, a test for whether Queen's Park is serious about solving the climate change problem. Without a dramatic increase in financial support from the Province, little will change.

However, there is cause for hope. As the Discussion Paper notes, the cost of inaction on climate change is huge. Damage to property and infrastructure from severe weather events, lost business opportunities that come from not supporting the green economy and a host of other financial and health costs make the price for inaction dramatically high.

Now, the Province has to publicly acknowledge that the only way to avoid this huge cost is by investing in cities and helping municipalities.

As Torontonians prepare to talk to Queen’s Park about climate change, we need to be very clear in our message: help our cities by giving them the resources they need to fight climate change.