The ChemTRAC program released Phase 1 data on the use and release of 25 priority toxic substances across Toronto in June 2012. 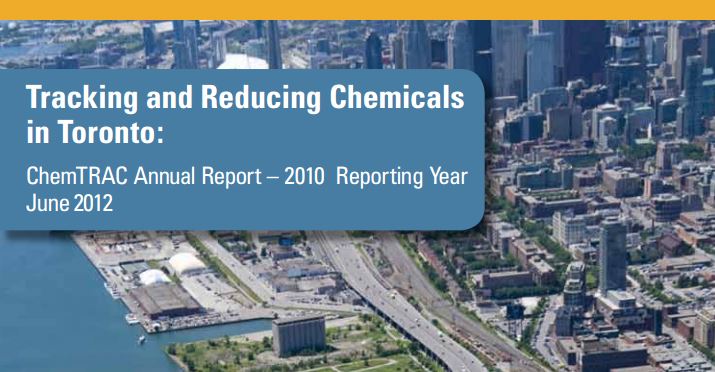 The ChemTRAC program released Phase 1 data on the use and release of 25 priority toxic substances across Toronto in June 2012.

The data is available online at toronto.ca/chemtrac.

Toronto Public Health has reviewed this data and released their first annual ChemTRAC program report which reviews the chemical data that was reported and provides suggestions for next steps to respond to potential health impacts, local air quality concerns and develop action plans for pollution prevention.

TEA attended the Toronto Board of Health meeting on Monday June 25th 2012 in order to learn more about next steps and offer our support for this groundbreaking program. We promoted the historic meeting to members of the public and our community partners were present to celebrate with us!

Preliminary findings suggest that 7 out of 25 priority substances were the most commonly reported substances in Phase 1. These include smog-forming contaminants such as VOCs, NOx and PM2.5 which were released in large quantities as well as four substances released in smaller quantities which pose health risks due to their toxicity. These toxic substances include known carcinogens such as Polycyclic Aromatic Hydrocarbons (PAHs) and cadmium, as well as harmful heavy metals like lead and mercury. Here are a few other key findings:

According to Toronto Public Health’s first annual ChemTRAC report, also released on June 18th, the preliminary findings of the Phase 1 data have already been put to good use. The chemical use and release data has helped Toronto Public Health identify key substances of concern and where they are released, which means they can better respond to potential health risks and local air quality issues. They have developed three key focus areas for 2012: