The ChemTRAC program has released Phase 3 Data on the use and release of 25 priority toxic substances across Toronto. Phase 3 of ChemTRAC signals the final stage of implementing this landmark 'Right to Know' program!

In addition to all of the earlier reporters to ChemTRAC, we now have chemical data for Phase 3 businesses such as textile and clothing manufacturers, metal  and electrical manufacturers, transportation support industries in ports, harbours, airports and vehicle towing. Check out ChemTRAC's chemical summary reports (including maps) for 14 major business sectors.

According to Toronto Public Health’s third annual ChemTRAC report, released on June 30th, there are 8 'Substances of Highest Concern' to our health.

TEA was at the Board of Health meeting and thanks to our efforts, we prompted a motion from City Councillors to take action to reduce these toxic 8 chemicals in 2015. Here's the motion that passed: 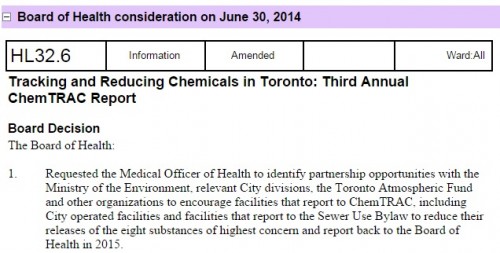 The 2014 ChemTRAC report has confirmed that there remain 8 out of 25 priority substances that require action to protect public health. These are the same 8 chemicals that were identified in last year's report including 3 substances that contribute to poor air quality and smog, and 5 toxic substances which pose health risks including cancer:

The data is not yet included on the online map due to technical issues with the City of Toronto's website. When it is posted, you can find it at toronto.ca/chemtrac.