Members of John Tory's executive are getting emails, calls and petitions from residents opposed to a Toronto Hydro sale. 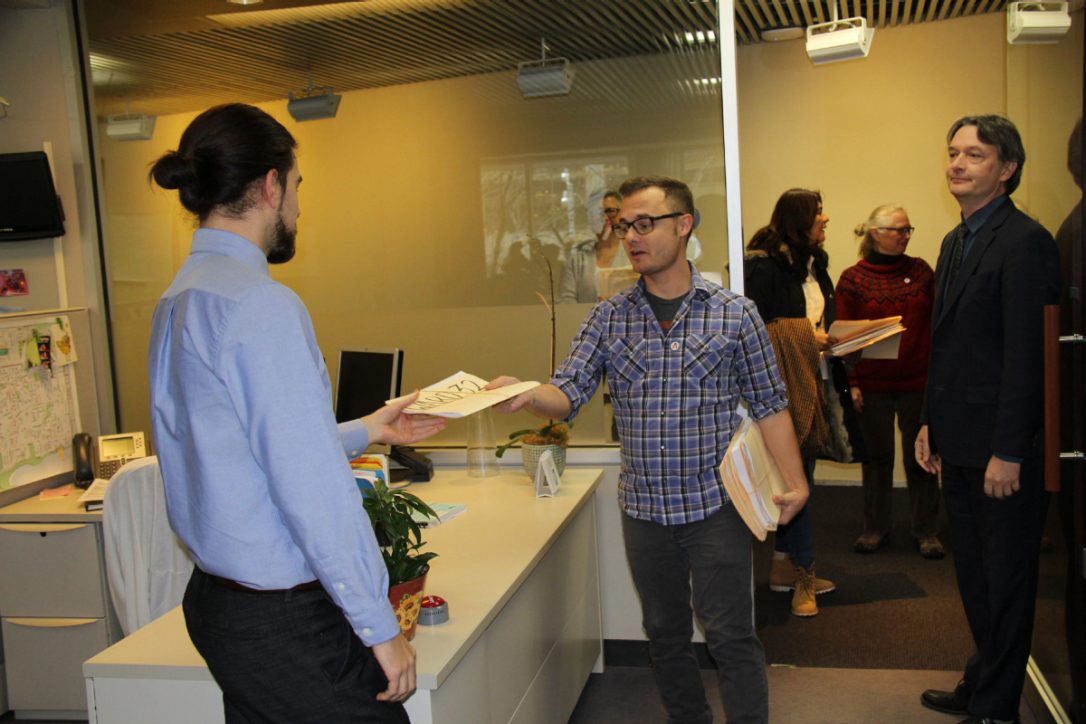 Fred Shilson of the Our Hydro coalition fighting any privatization of Toronto Hydro delivers petitions from Toronto residents to a city councillor's office at City Hall on Tuesday.

Opponents of Toronto Hydro privatization are stepping up their multi-pronged campaign ahead of the release of an important city manager report on Thursday.“Our Hydro” coalition members including the Society of Energy Professionals, Toronto Environmental Alliance and housing advocates ACORN Canada are encouraging residents to flood the phone lines and email inboxes of members of Mayor John Tory’s executive committee.They delivered a total of 2,500 constituents’ letters to the councillors’ city hall offices Tuesday, arguing privatization could hike power rates, slow response to power failures and halt environmental initiatives.The coalition also released a slick YouTube ad depicting a terrified man, who appears to be a doctor, fleeing into an elevator as lights flash on and off. He is lifted up, legs kicking, by an unseen force as the words “Tell city council to keep Toronto Hydro public before it’s too late” appear on the screen.On Wednesday ACORN is launching an “Energy is Essential” campaign, with rallies outside the Ontario Energy Board office in Toronto and a church in Ottawa, arguing that provincial policies, including a reduction of tax penalties on power utility mergers and privatization, are failing low-income tenants.Councillor Paul Ainslie, a member of both Tory’s executive and the Toronto Hydro board of directors, said his office has received about 1,000 anti-privatization messages and roughly 100 phone calls per day from residents.“I’m always happy to listen to my residents and I haven’t had a petition of this size for a while,” said the Ward 43 Scarborough East representative. “It’s something I’ll take into consideration but I don’t know what they’re saying that’s resonating with 1,000 people.”Another Hydro board member, Deputy Mayor Denzil Minnan-Wong, said he has received far fewer calls and is personally returning them to correct “misinformation” in the anti-privatization leaflet handed out by ACORN and environmental alliance members canvassing homes in the wards of executive committee members.

“I disabused people of a lot of the misinformation they’d been fed,” said the Ward 34 Don Valley East councillor.“I told them I want to have a healthy electricity company that’s able to keep the lights on and rates reasonable.”He cited, as an example of misinformation, the argument that sale of a minority stake in Toronto Hydro will boost electricity rates that have already jumped considerably.An initial public offering of Hydro stock to the public would not automatically raise rates. However, any investors who pump money into maintenance and improvement of the electricity grid could ask the Ontario Energy Board to approve a rate increase to give them a return on that investment, just as Toronto Hydro does now.A report from city manager Peter Wallace on the pros and cons of selling part or all of Toronto Hydro and the Toronto Parking Authority will be released Thursday, along with reports on: revenue tools and what they could earn for the city; Toronto’s long-term financial direction; and possible tolls on the Gardiner Expressway.Tory’s executive committee will consider the asset sales report next week but city council will have final say on the sale of any part of Toronto Hydro.In a September speech Tory said council must look at “unlocking” the value of Toronto Hydro to free up money for the energy grid, transit expansion and public housing. Hydro executives have been meeting privately with councillors to talk about the utility’s need to invest infrastructure, although not explicitly pitching privatization.Councillor Mary-Margaret McMahon, Ward 32 Beaches-East York, said she is not sure if residents’ calls, emails and petitions will influence her vote at executive committee.“I haven’t heard any support for (Hydro privatization) in my ward, and I’m not sure it’s the best course of action, but we’ll get the report and find out what it says,” McMahon said.