Toronto's streets are getting dirtier, and the city doesn't have the sweepers to keep up - CBC News 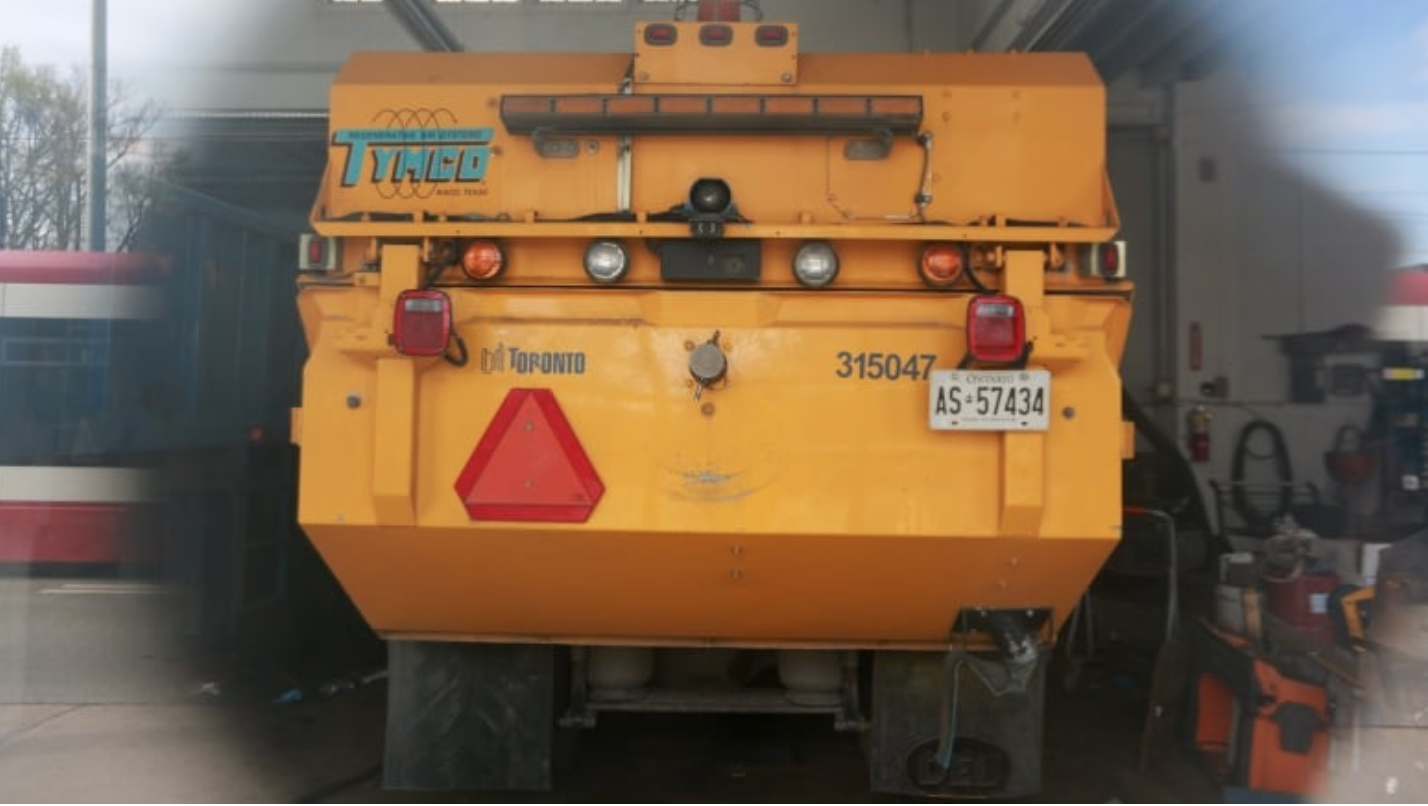 The City of Toronto is struggling to keep many streets clean due to maintenance issues with its aging fleet of Tymco street sweepers. CBC Toronto has learned those problems could persist all summer long, leading to poor air quality and more waste flowing into the stormwater system. (John Rieti/CBC)

The City of Toronto is struggling to clean its expressways and local roads due to ongoing maintenance issues with its fleet of aging street sweepers, leaving residents breathing in dirtier air and more road waste flowing into Lake Ontario.

Transportation staff confirmed that on a typical day just 28 of the city's 43 sweepers — white trucks equipped with big yellow vacuums that suck up dirt while also filtering the air — fan out across the city. On one April day, nearly a quarter of the city's entire fleet was in for maintenance.

Worse, this problem is expected to continue throughout the busy summer construction season as replacement vehicles won't be available until the end of 2019 at the earliest.

The city's own research, conducted as part of its internationally-lauded Clean Roads to Clean Air program, shows if a fleet of regenerative air sweepers aren't at work in Toronto, there will be more airborne fine particulate matter hanging around for people to breathe in while more "toxic loads" will wind up fouling the city's stormwater system.

Heather Marshall, campaigns director with the Toronto Environmental Alliance, said keeping the city's streets clean is especially important in the spring and summer months, when heavy rain washes pollution into the stormwater system and hot conditions lead to poorer air quality across Toronto.

"It's really important to be taking that pollution that settles on our streets off the streets entirely," she said.

"We know here in Toronto we have an air quality challenge," she said.

Marshall said the city should have been adding more sweepers as construction boomed and more people moved to Toronto, bringing more pollution with them.

But since 2007, when councillors purchased 50 top-of-the-line sweepers and voted to require any new sweeper technology to meet strict environmental standards, the city hasn't purchased a single new machine.

There are plenty of good reasons to keep the streets clear of debris and road dust — a mix of crunched up rock, metal, vehicle exhaust, litter and more.

Clean Roads to Clean Air focused in on finding the best way to remove fine particulate matter from Toronto's roads. That particulate, referred to as PM 10 and PM 2.5, is considered a toxic substance under the Canadian Environmental Protection Act.

Health research has shown the human respiratory system is negatively affected by the airborne mix of lead, aluminum and aromatic hydrocarbons.

"We have more hospitalizations and premature deaths in our city than we ever should because we're not dealing with our air pollution," Marshall said.

That claim is backed up by the city's own health board, which reported in 2014 that some 1,300 people died prematurely and 3,550 were hospitalized due to air pollution.

Recognizing this, the city set targets for cleaning its 5,397 kilometres worth of road.

City staff say sweepers are still meeting cleaning targets on major arterial roads and business improvement areas, but admit there aren't enough to clean expressways or local roads (the target is to clean local roads once every two months).

This spring, the city was also forced to contract out some of its road-cleaning work for two weeks. CBC Toronto is seeking more information about how much that move is costing taxpayers.

The city's street sweeper fleet has been hampered with maintenance issues for years, and the woes are well-documented.

Current Auditor General Beverly Romeo-Beehler found this month that from 2015 to 2018 there were lengthy vehicle downtimes due to repairs. One of her most striking findings was that nearly one in three of the city's heavy duty vehicles — which includes sweepers — was out of service daily in January and February of this year.

Romeo-Beehler suggests several reasons why this is happening now, but the problems have existed for years.

In 2007 and 2008, the city purchased 50 regenerative air sweepers — the exact model is the Tymco DST-6 — that its research found reduced airborne fine particulate matter at street level by at least 21 per cent when compared to traditional broom sweepers.

Before the DST-6's, the city's fleet sucked up an average of 6,432 tonnes of waste from the roads. A year later, with the new machines, that average tonnage was up to 15,854 tonnes.

But despite the successful start, the city's former auditor general, Jeff Griffiths, found many of sweepers were poorly-maintained in the following years, and in some cases damaged by the use of after-market parts.

By 2012, the average tonnage collected was down to 8,720, and city staff, raising concerns about the sweepers' performance, sought to acquire more mechanical sweepers.

After this story was published, the city said its sweepers collected 14,125 tonnes of road dust and debris in 2018 (data for 2019 isn't available. That figure raises more questions about how much pollution is on Toronto's roads.

Even now, the city's new purchase isn't for DST-6 machines.

Instead, Toronto is buying Tymco 600 sweepers, a lower-grade model that has not been verified by ETV Canada, the organization that certifies green technology in this country (the DST-6, on the other hand, was recertified in 2017).

"These two models have identical design and ratings for the regenerative air street sweeping system," said Eric Holmes in an email.

CBC Toronto has contacted Tymco to learn more about the different sweeper models, but hasn't received a response.

What's happening in Toronto hasn't stopped the City of Hamilton, which was a partner in the Clean Roads to Clean Air testing, from investing in high-end street cleaners.

Hamilton currently has a fleet of 19 DST-6 sweepers, three of which were acquired and put into service in May, officials there confirmed.

Hamilton spends $440,000 per year to maintain its sweeper fleet — or about $25,000 per vehicle. The City of Toronto expects to spend the same to maintain its new vehicles.

CBC Toronto has asked if the city's auditor general will look into the purchase. In an email response, Romeo-Beehler said she will soon launch the second phase of a review of the fleet services division, which will include: "the purchasing and management of vehicles and other aspects of fleet management."

This week, Mayor John Tory announced this year's construction season will include $370 million to repair and improve roads and expressways. The question is, whether or not the city has what it needs to take care of those investments.

Tory's office, in an email to CBC Toronto, said city staff have assured the mayor that new sweepers will arrive by the end of the year.