Toronto urged to take care of its own trash - Toronto Sun 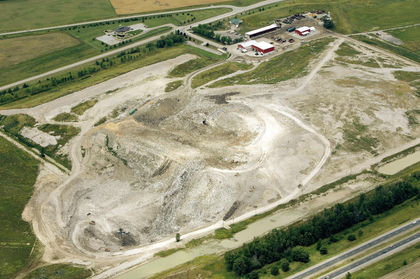 TORONTO - “Put your garbage in Christie Pits,” the mayor of Ingersoll told Toronto’s public works committee Tuesday as it ponders a new site for Hogtown’s trash.

“I don’t want it in my backyard,” Ted Comiskey said.

The Greenlane Landfill near London could have its life extended from 2029 to 2040 if serious efforts are made to divert more trash that doesn’t belong in a dump. But that still means Toronto will need to find a new dumping ground.

Comiskey objects to even the possibility of Toronto considering a site in Zorra Township, located east of London and adjacent to his town.

“There are numerous environmental concerns around this site. It is close to the Thames River and when the dump leaks, it’s going to affect the drinking water of many people in the area,” Comiskey said.

“This is a limestone quarry and limestone is extremely porous rock, which means anything that leaks on the liner is going to be sucked in by the rock and make its way to the water table.”

Comiskey says he’s angry his township could be targeted for trash from Toronto, yet nobody from the city has approached him to discuss the matter.

The public works committee was told those living in apartments and condos only divert 26% of the waste that could be diverted from landfills.

Toronto houses sort 68% of garbage that could be recycled.

“People need to be educated of existing programs,” said Emily Alfred, of the Toronto Environmental Alliance.

“We need to ramp up existing programs and more enforcement is important.”

“It underlines the need for a long-term strategy even if (Greenlane) lasts longer than expected,” Tory said.

“What is embarrassing is we should look after our own problems. How would we feel if Ingersoll’s trash was shipped here?”