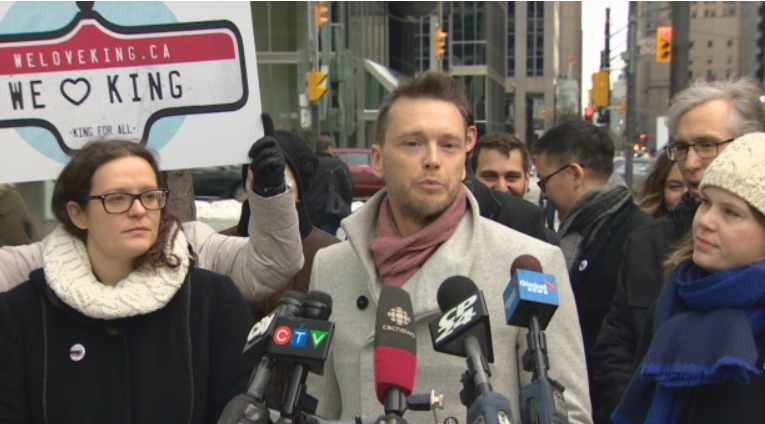 A coalition of more than 15 organizations has a launched a "We Love King" campaign to show support for the pilot project that makes transit a priority in the downtown artery, partly in response to protests by local businesspeople who say the plan is costing them money.

Todd Hofley, president of the Liberty Village Residents' Association, representing about 10,000 condo dwellers, said the newly formed "King for All" coalition encourages all Torontonians to let the city know they approve of the pilot project by signing a pledge online.

King Street should be "a street that remains open to all," Hofley told reporters on Monday.

"We truly believe that everyone stands to benefit from a successful pilot project," Hofley told reporters on Monday. "This isn't just about transit. It's about a re-imagining of King Street, as a destination in and of itself."

The pilot project, which began in November 2017, makes transit a priority on King Street between Bathurst and Jarvis Streets. (CBC)

The coalition, which includes residents' associations, community groups and cycling advocates, will suggest "constructive" improvements to the pilot project as well as encourage people to visit King Street to support local businesses.

Despite some of benefits of the pilot, some business owners along King have been outspoken critics, saying it has hurt their bottom line. Some restaurateurs say the loss of on-street parking and the measures to reduce car traffic are keeping customers away.

Hofley said King Street is an extremely important roadway for the people who live in the area, and transit on the street serves thousands of people from Parkdale in the west end to Leslieville in the east end.

'It's the spine of our neighbourhoods'

"It's what we use on a daily basis. It's the spine of our neighbourhoods," he said.

Amanda O'Rourke, executive director of 8 80 Cities, a non-profit organization, says: 'For too long, our streets in Toronto have been measured using one priority — the movement of cars. The King Street pilot offers us an opportunity to break free of this thinking.' (CBC)

Amanda O'Rourke, executive director of 8 80 Cities — a non-profit organization that aims to enhance quality of life for city residents by bringing people together to enhance mobility — said the pilot project takes a larger view of the role of streets in a big city. The group believes that if everything people do in public spaces is good for an eight-year-old and an 80-year-old, then it will be great for all people.

"The King Street pilot is not just about King itself. It's about what kind of city we want to be. A city trapped in the old ways of thinking about mobility or a 21st century city adapting to an increasing demand for better, more reliable transit? A city for moving cars, or a city for moving people?"

How pilot project is faring

O'Rourke said the pilot's success should be measured not only in terms of how quickly people can take transit from point A to point B, but also whether King Street thrives as a destination.

Shelagh Pizey-Allen, executive director of TTCriders, said after the news conference that transit riders are enjoying the pilot project.

"Ridership is up, reliability is up, travel times are faster and we want to support the King Street pilot and make it work for everyone."

Two-hour transfers would help King Street businesses because transit riders could hop on and off the streetcar, she added.

The pilot project, which began in November 2017, makes transit a priority on King Street between Bathurst and Jarvis Streets.

According to official city statistics from December 2017, the pilot project has improved average streetcar travel times. The city says the most significant improvement occurs during the afternoon rush hour, when the slowest streetcar travel times, once around 25 minutes, have improved by about four minutes in each direction.

Members of the public can pledge their support for the pilot at the coalition's website.