Why takeout coffee cups belong in the garbage, not recycling

Every day, Torontonians mistakenly dispose of hundreds of thousands of used coffee cups in recycling bins 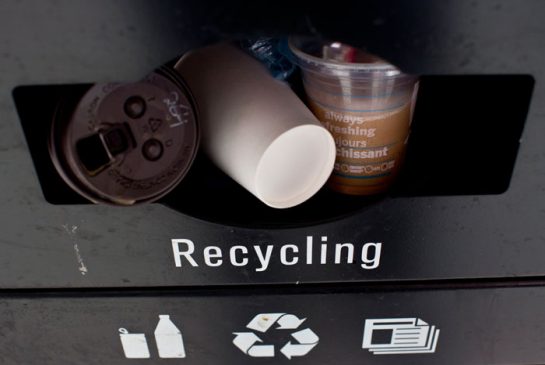 Photo Caption: A recycling bin stands full of coffee cups on Yonge Street in downtown Toronto. People in Toronto use about a million of disposable coffee cups a day.

The Starbucks barista, when quizzed, said confidently the disposable coffee cup she was holding was 100 per cent recyclable.

Then she read the tiny print around the bottom: “This cup is made with 10 per cent post consumer recycled fibre.”

“I put mine in the recycle bin,” she said, clinging to her belief, but adding, “you’d better check Google.”

She is not alone in her confusion. Every day, Torontonians throw away hundreds of thousands of used coffee cups, many dropping them into blue bins under the false assumption they’ll end up be recycled.

Those empty Second Cup, Starbucks and Tim Hortons cups should actually go into the regular garbage, which is why the city has just launched Bad Things Happen, a public education campaign that identifies the leading “culprits” not intended for recycling bins.

Last year, an estimated 45,000 tonnes of garbage was mistakenly deposited into the recycling stream, where it can end up damaging equipment, causing workplace injuries and ruining perfectly good recyclables.

That includes hot beverage cups, though just how many land in blue bins is unknown. Torstar reported in 2009 that Torontonians were discarding about a million cups a day; the city was unable to confirm whether that number has risen or declined since then.

“Paper coffee cup sleeves can be recycled, as they do not contain a plastic type lining in the fibre material.”

It wasn’t supposed to be this way.

Nine years ago, the city formed a task force to look for ways to get coffee cups out of the trash.

There was a proposal to ban paper cups with plastic lids and another to force coffee shops to give customers with their own mugs a 20-cent discount. The hot beverage industry balked.

“Coffee companies said the city was stepping beyond its jurisdiction and they’d do it voluntarily,” said Emily Alfred, of the Toronto Environmental Alliance (TEA).

The country’s largest coffee chains installed in-store recycle bins, but there’s no proof the cups are actually being sent to a recycling plant, she said. The blue containers in Starbucks say: “More recycling. Happier planet.”

Asked to comment on their recycling policies, Starbucks and Tim Hortons emailed statements to Torstar saying they are proud of their commitment to recycling and reducing waste.

“What is recyclable varies broadly by municipality and sometimes even by store. We pay local private haulers across the country to collect and recycle hot cups where they are accepted,” the Starbucks statement said.

Tim Hortons is working closely “with waste industry experts and we know that our hot beverage cups can be successfully recycled,” the company’s email said. “We will continue to work on implementing effective strategies that navigate the vast variances in what is accepted in recycling or waste diversion programs across the country.”

This week, Toronto’s public works and infrastructure committee will consider the city’s new waste strategy, which recommends ways for the city to reduce, reuse and recycle.

As part of the strategy, the city could introduce rules to reduce packaging on things such as hot beverage cups, similar to how council imposed and later rescinded a five-cent plastic bag fee, Alfred said.

In the past, the city also looked at requiring all takeout food containers — including coffee cups — to be recyclable in the city’s blue bins. That would force major coffee chains to change the design to ensure that cups and lids are made of the same material and therefore more easily recycled.

As Originally published: Why takeout coffee cups belong in the garbage, not recycling
Do you like this post?