Windmill Line is a co-op building in the Esplanade neighbourhood of Toronto, built in the early 1980s. The co-op is a single tower with 10 stories and 206 units. The building joined the project in Fall 2019. 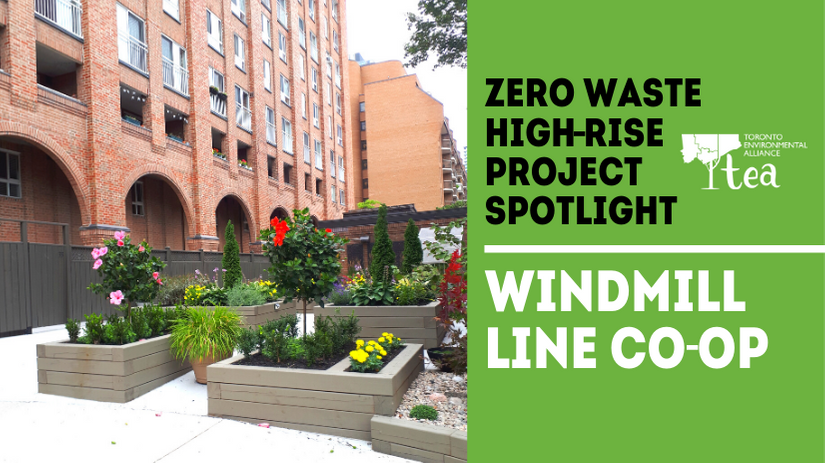 Windmill Line Co-op’s resident Zero Waste team was putting the finishing touches on a waste reduction plan in February 2020. As part of the Toronto Environmental Alliance (TEA)’s Zero Waste High-Rise Project, the team had evaluated the building’s waste collection and waste output, and surveyed co-op residents to gather ideas and concerns. They had also participated in tours to learn from other buildings in the project. With this understanding of their opportunities, they were ready to get to work.

When COVID-19 shutdowns began in March, it was clear that the team’s waste reduction plans - including holding a series of educational events - were no longer possible.

Determined to continue improving waste services in the building, a Zero Waste team member, Camille Hines remembered something she’d seen on a tour of the model zero waste building, Mayfair on the Green: collecting used cooking oil for recycling.

Camille learned from staff at Mayfair that keeping cooking oil out of kitchen drains prevents clogged pipes and saves Mayfair thousands of dollars of plumbing costs each year.

A couple of years ago, at a Maintenance Committee meeting, I can clearly remember when one of our members raised the matter of cooking oil disposal. She told us in a meeting that she had been collecting her own cooking oil for years, and had no idea what to do with it. I filed this away in the back of my mind, where it stayed until my visit to Mayfair in the Green with our General Manager, our own Maintenance Department, and Sayan and other members of the Toronto Environmental Alliance team, and right there in front of me, was the answer: how to dispose of cooking oil in a responsible and environmentally-friendly manner.

She presented the idea to the rest of the Zero Waste team, and they agreed this is something that could move ahead right away. They researched and contacted cooking oil recycling companies and selected one that would provide an oil barrel for collection. In July, they set up the barrel in the building waste room, along with signs and jars for residents to transport oil in. Lastly, and most importantly, they designed friendly flyers, proudly announcing the new service to other residents.

The new cooking oil collection service has been a huge success, with residents routinely bringing down their used cooking oil. 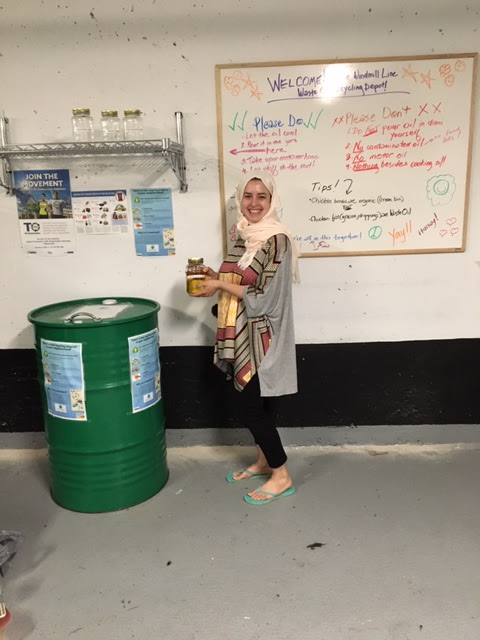 Since we have implemented the cooking oil recycling project, many other members have approached me to say thanks, that they welcome this project, and that finally they no longer have to worry about what to do with used cooking oil.  All in all, so far, this has been an extremely successful project, as after two almost three months we continue to receive many positive feedback from our members. Many thanks to Princely from Mayfair on the Green, who has been very helpful in giving me advice based on his own success and is never too busy to take my calls.

The project also showed team members, staff and residents that reducing waste and making recycling easier is something that is important to the Co-op and can keep moving ahead despite challenges in meeting.

How they made it happen:

Get involved with the Zero Waste High-Rise Project! Sign up for our online program to learn more about reducing waste in your building and get access to tools, resources and peer learning events!