The 2022 City Budget process is underway, and soon, City Council will be making decisions about funding for critical City programs, services, and infrastructure, from public transit, to housing and shelters, to libraries, to climate action. While Toronto passed an ambitious new Net Zero Strategy in December, more action is needed to make sure this strategy is funded so we can increase our climate resilience and improve the wellbeing of Toronto residents. 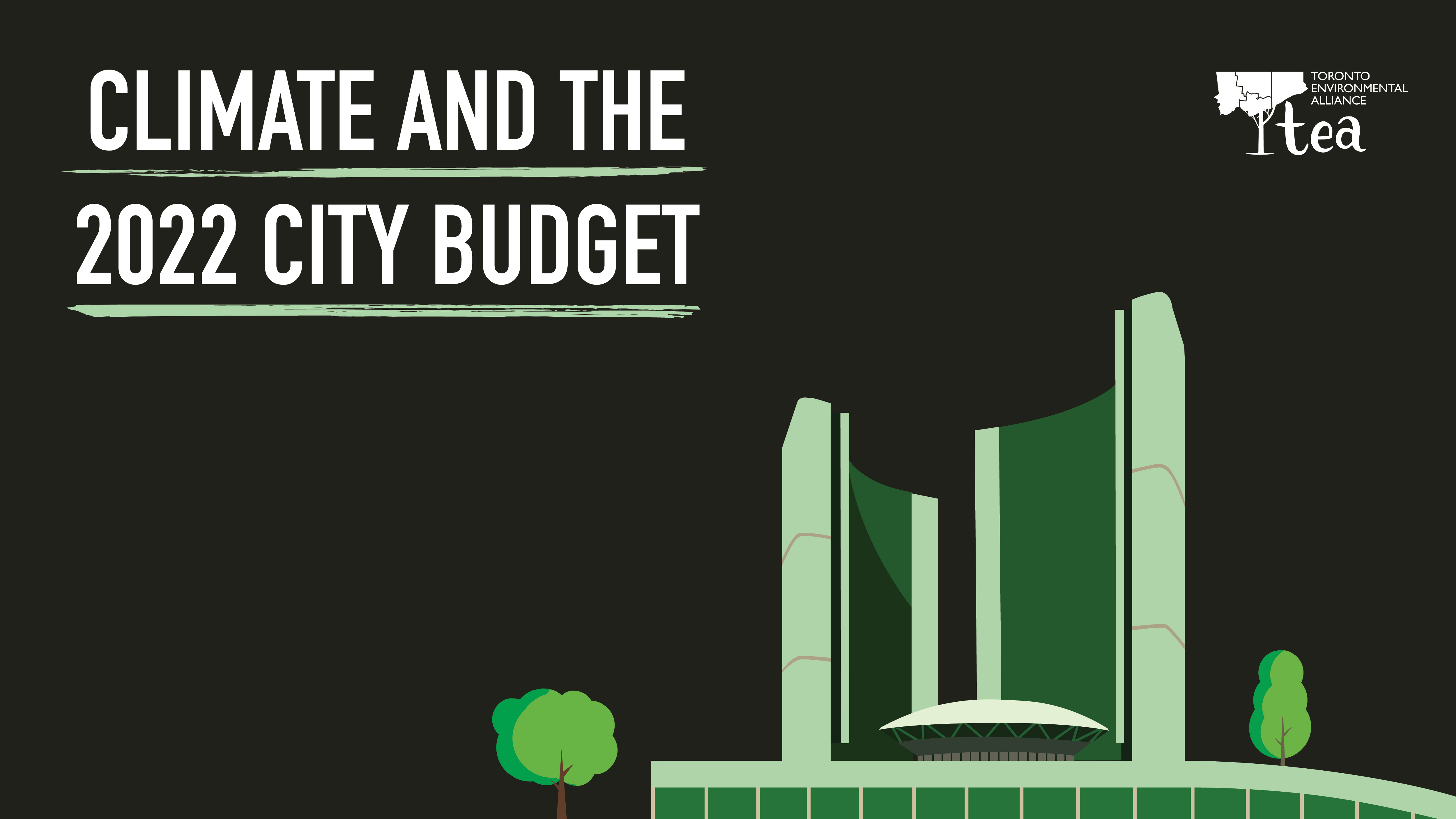 The City of Toronto launched the 2022 City Budget process on January 13th. Over a period of a few weeks, City Councillors will discuss, debate and make decisions about the Budget. Before they vote on the Budget on February 17th, it is critical that they hear from residents about their priorities and concerns. The Toronto Environmental Alliance (TEA) is working alongside communities and other organizations to advocate for a better City Budget that improves life in our city and ensures a greener, healthier and more sustainable future. (Learn more about key budget dates).

Our analysis of the 2022 City Budget has three key areas for action. It is clear that we need to deepen investments in critical city priorities - including climate action - in this year’s Budget, and take steps to improve the Budget process in the years ahead. In the face of multiple emergencies, we can’t afford more of the status quo. We’re calling for:

Funding for climate action in this year’s City Budget

Toronto City Council adopted an updated climate plan in December 2021 called the TransformTO Net Zero by 2040 Strategy. The strategy sets a new target of net zero emissions by 2040. This was an ambitious - and necessary - step up in Toronto’s climate ambition. We were looking to see this level of ambition and commitment reflected in the City Budget.

However, the proposed 2022 City Budget doesn’t ramp up investments at the scale that is needed. This year’s Budget only makes a small increase above the 2021 City Budget for the Environment and Energy Division, the City Division leading on climate action. However, the Net Zero Strategy Technical Report outlines a significantly higher level of investments that must be made each year if Toronto is going to achieve its targets. We’ll have to ramp up investment in climate action in the years ahead if we want to achieve our climate targets and increase our collective climate resilience. (Read more analysis of climate funding in our detailed submission to the Budget Committee.)

There are opportunities for City Council to act this year on the top sources of emissions - transit and buildings - while improving equity and wellbeing. We are urging the City to accelerate funding in key areas including:

Improvements to the City Budget process

To ensure the City Budget reflects the priorities and needs of our community, we are calling for increased transparency and accountability, and more opportunities for public participation earlier in the budget process so that residents are meaningfully involved.

At present, the budget process timeframe, and the challenges in accessing important information, do not enable deep civic participation. This includes making clear the total amount of climate investments across City divisions, explaining which aspects of the plan the City will fund and from where it expects other sources of funding. ​​The City needs to make transparent the criteria used for its Equity Lens and Climate Lens, and apply them consistently across divisions and agencies. (Read more detailed recommendations in our submission to the Budget Committee).

Since the original TransformTO climate plan was passed in 2017, there have been repeated delays and climate action has been underfunded in the City Budget. We are in a climate emergency and have committed to a significant step up in our climate ambition. That will require the political will to implement this plan and robust and sustained funding to bring it to life.

After more than a decade of underfunding critical city services and programs, it’s time to move forward with new revenue tools. Over the past several years, civil society organizations have been asking the City to commit to creating and implementing new revenue tools - that are fair and equitable - within its own powers. While putting our new climate plan into action will require support from other levels of government, the City has the power to develop new revenue tools to fund climate action and other City priorities such as reconciliation, housing, transit and child care.

We can’t afford more status quo City Budgets. City Council can take further action this year to deepen funding in key climate areas and take steps to improve our budget process so it is fair, transparent and prioritizes what is most important. It’s time to invest in our communities to create a green, healthy and equitable Toronto.