This month, Toronto City Council had a marathon meeting before their summer break and debated major issues that shape our city services. The 2017 City Budget and the Scarborough subway were hot topics, but other transportation issues like the Road Safety Plan and the Waterfront Transit Plan also got some attention. Toronto passed a new and improved Waste Strategy that embraces TEA’s zero waste agenda and Councillor Bailão is taking on smelly neighbours with a proposal to control odours from Toronto manufacturers. 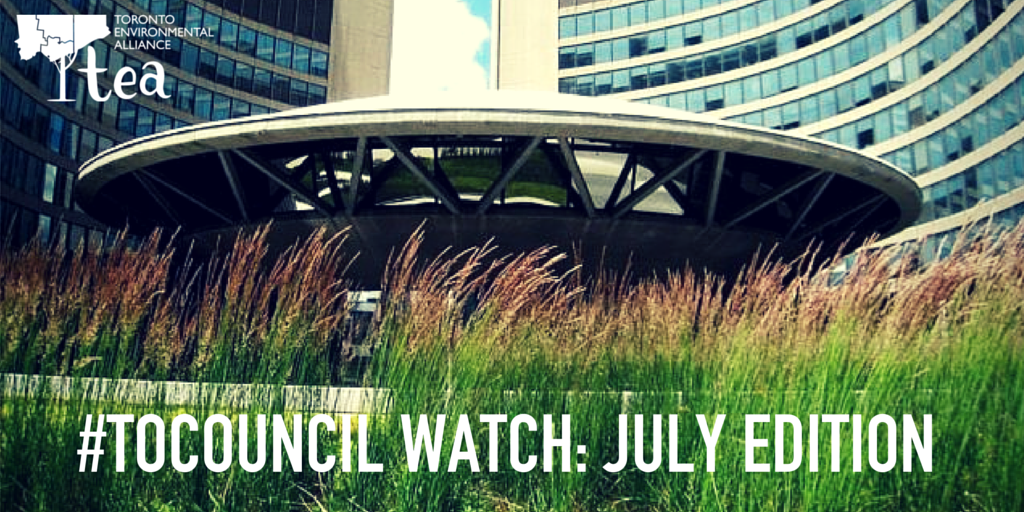 When City Council is in session, the first few topics of debate are decided by the Mayor of Toronto, officially known as the ‘Mayor’s Key Matter’. The July Council session was a long one (4 days) not only because it was the final session before their summer break but also because the Mayor’s two key matters were the 2017 Budget and Developing Toronto’s Transit Network Plan.

Next year's budget was the first thing Council discussed on Tuesday July 15th, and we learned that the Mayor’s wants all City agencies, programs and corporations to cut their net* operating budgets by 2.6% this year.

The majority of Councillors voted with the Mayor’s directive, which places us in the poor position of having an 8th year of flatlined or cut city budgets. Annual inflation and population increases mean the city is spending even less on more people, all while we watch city services like the TTC, tree maintenance, and street repairs steadily deteriorate.

There were a number of valued attempts from Councillors to protect the Poverty Reduction Strategy, affordable transit fares, community housing and child care spaces from budget cuts, but the majority of Councillors still voted against them. However Councillor Carroll and Councillor Wong-Tam did win requests to reconsider cost-saving public service delivery options and to incorporate a gender equity perspective into the budgeting process and services review.

This is the beginning, not the end, of the budget debate. There is still lots of time for the public to voice their concerns about the impacts budget cuts can have in their communities. The public launch of the budget is set for December 2nd, 2016.

On Wednesday July 13th, City Council once again rejected a plan to build a LRT network in Scarborough that would have created 2 light rail transit lines with 24 stations and voted instead to extend the existing Bloor-Danforth line one stop to the Scarborough Town Centre.

For some, the debate was about how Scarborough deserves a subway. For others, it was about how many Scarborough residents deserve accessible fast, reliable rapid transit, in particular those from marginalized communities who face limited transit service. The one stop subway will serve roughly 1,700 people living in neighbourhood improvement areas while the LRT network would have served almost 26,000.

Regardless of your opinion on the Scarborough transit debate, there is another big debate simmering. "Instead of addressing the ridership slump, city council is making the problem worse" says Jessica Bell from TTCriders. Read their op-ed in the Toronto Star to learn more.

Here at TEA we use lots of acronyms but this is a new one for us: KSI (Killed or Seriously Injured). If you are wondering why City Council was discussing a Road Safety Plan this month, it is because 348 people were KSI in Toronto in 2015 alone. Many cities worldwide are taking action to prevent the deaths and injuries of the most vulnerable road users (pedestrians, cyclists, and motorcyclists) and they’re aiming for 0 KSIs - a Vision Zero.

After lots of pressure for advocates, lengthy debate and lots of amendments, Toronto City Council unanimously approved a Road Safety Plan on Thursday July 14th that adopts a Vision Zero goal, an action plan to complete the work within 2-5 years, and injects more money into the budget. Actions range from reducing speed limits in high-risk areas, increasing speeding fines, and various infrastructure changes to calm traffic, increase visibility and protect pedestrians and cyclists.

We get calls about odour issues on a regular basis (especially in the summer) and, where possible, TEA has worked with concerned residents to demand change from their industrial neighbours through Good Neighbour Campaigns. That is why we were excited to see some traction on this issue at City Council this month. Prompted by complaints about a local manufacturer in her Ward, Nitta Gelatin, Councillor Bailão put forward a Member Motion on Thursday urging the City to investigate actions such as an Odour Control By-Law to prevent odours from smelly manufacturers who are having an impact on local residents’ quality of life. Councillor Di Ciano, who seconded her motion, has also been dealing with odour complaints from a cosmetics manufacturer in his Ward in Etobicoke. Learn more

Phase 2 of the Waterfront ‘Reset’ Transit Plan is focused on extending TTC streetcar service along a 23 km stretch of Toronto’s lakeshore from as far west as Long Branch to Woodbine in the east. City staff requested City Council to release some money set aside in the budget to get started on designing this part of the transit plan. This is surely welcome news for many transit riders and Etobicoke Councillor Grimes took the opportunity to highlight the urgent need to improve transit service for residents living in the high growth area known as Humber Bay Shores near Park Lawn. TEA’s INHALE air monitoring project has identified higher levels of air pollution along congested areas like Lakeshore and better transit service is key part of the solution.

Thanks to TEA's work and the action of our supporters, the Strategy has a long term goal of achieving zero waste and will do this by tackling organic waste first, promoting community solutions to reduce and reuse, and improving waste collection services to keep valuable resources out of our landfill.