In this issue, we reflect on the power of people joining together to demand action on the environment, at the global and local level.

Last Sunday, over 3000 Torontonians gathered in Nathan Phillips Square, while hundreds of thousands of people gathered in cities around the world with the same message: we want action on climate change. 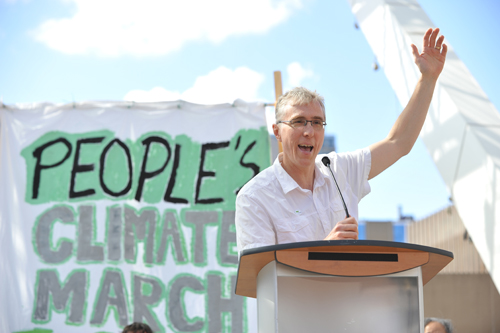 Franz Hartmann, TEA’s Executive Director, joined the rally and delivered a message of hope: while climate change is a global problem, we can take action right now in our own city. Franz reminded the crowd that City Hall plays a key role in addressing climate change: including managing how we move (eg. the TTC, roads, bike lanes, walking), how we design our cities, and how to build the green infrastructure we need.

His message was simple: this municipal election is an opportunity to ask our leaders to take action on climate change. Talk to your neighbours and friends, ask council candidates where they stand, and ask them to support TEA’s Green Action Agenda.

Rally on the Environment

Following the People’s Climate March, the environment has been top of mind for many people in the city. This Thursday, TEA is hosting the mayoral debate on the environment. With over 600 RSVPs and the event at full capacity, it is clear that the residents of Toronto care about the environment.

Both Olivia Chow and John Tory have confirmed they are attending. The debate will focus on the environmental issues covered in TEA's Green Action Agenda. We look forward to hearing the candidates' thoughts on what can be done to make Toronto A Greener City for All.

Over the past number of weeks we have reported out on all the things that we do without the support of funders or granting bodies. Because of the political nature of our work TEA does not qualify for charitable status. Thanks to your support, and the hard work of our hundreds of volunteers and community partners, we've been able to achieve amazing things.

Every dollar raised helps us inspire Torontonians to build A Greener City For All. Continue to support us as we moved towards electing a new mayor and city council.