Did your Councillor stand up for you?

On Tuesday night, Toronto's City Councillors and the Mayor literally stood up to show their support or disregard for polluter pays.

"All those in favour, please stand" said Speaker Nunziata, marking the moment when City Council decided whether polluters should pay for their own clean up costs. 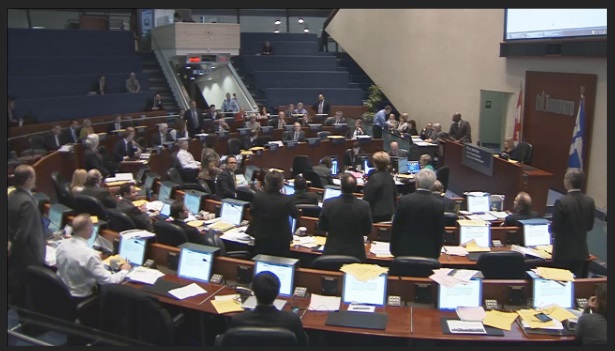 Normally Councillors vote with the press of a button, but with the computer system on the fritz, Councillors had to use the 'old school' method of standing to vote.

18 City Councillors rose to the occasion and stood up for polluter pays. It was symbolic really, as they were also standing up for their constituents who no longer want polluters to get discounts while other water customers pay for it.

Unfortunately, 22 Councillors plus the Mayor chose to stay seated. They voted against full cost recovery, opting to let large polluters continue to get discounts on their clean up costs.

The outcome of the vote, 18 'standing' in favour and 23 'sitting' against, was a discouraging sight to see. Here is how the Councillors voted: 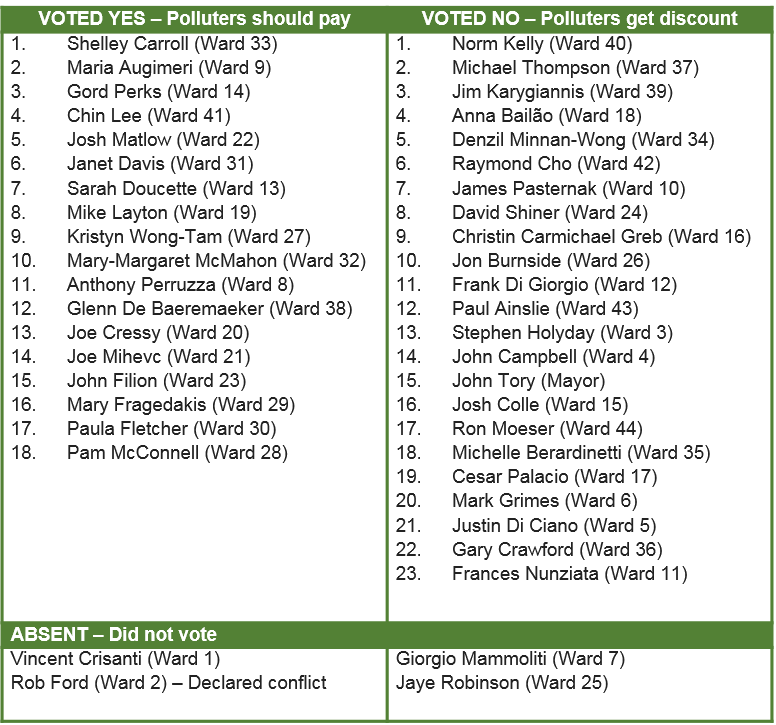 Find out which Councillor represents you using the City's Ward Lookup tool: http://bit.ly/TOwards

Despite the outcome, we know that your petition signatures and TEA's presence did make a difference.

Without our vocal support for polluter pays, there never would have been a debate about it at Toronto City Council. We made sure the issue was publicly raised and debated in a democratic and open way.

At the beginning of the City Council meeting on Tuesday morning, many Councillors stood to announce the number of petitions they received from their residents, asking for companies to pay the full cost of cleaning up water pollution.  Over 1,200 petitions became part of the public record and this act alone set the stage for a healthy debate. 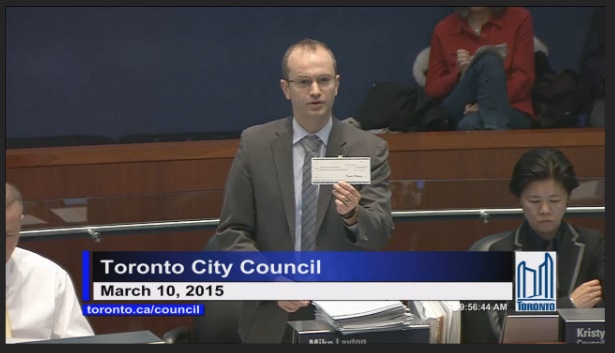 It wasn't until nearly 8:00 PM that Councillors and the Mayor had a chance to debate and discuss the polluter pays decision as part of the Toronto Water budget. Councillors Layton, Davis, Shiner, Grimes, Moeser, Thompson, Perks, Campbell, and Carroll asked probing questions to the heads of Toronto Water and Economic Development; seeking clarity on how and why polluting companies received these discounts.

Mayor Tory and Councillors Layton, Perks, Davis, Kelly, Carroll, Shiner, Thompson, and De Baeremaeker stated their intentions to vote for or against polluter pays in front of City Council, encouraging others to vote with them.

Mayor Tory suggested that, at this time, achieving full cost recovery through polluter pays was "an unwise thing to do".
"Despite the Mayor's disapproval, I'm going to make the motion anyway," said Councillor Layton, who led the charge in favour of polluter pays at Budget Committee and City Council.

"We should be making sure that the corporations that invest millions in their plant, making sure they follow the laws we put in front of them... are rewarded and thanked for making those investments - and the companies that don't aren't given a free ride on the backs of the companies who actually do make the proper investments".

Keep the momentum going
While we lost the vote, there will be opportunities to keep the momentum on this issue going. TEA intends to work with City Councillors to investigate these water pollution benefits further. We also hope to participate in a consultation related to the Industrial Waste Surcharge Agreement that will arise through Economic Development this year. This polluter pays opportunity may be debated again for the 2016 budget.

You can keep the momentum going by contacting your Councillor. If they stood up for polluter pays, thank them! If they stayed seated so that polluters can continue getting discounts, let them know how you feel about that.