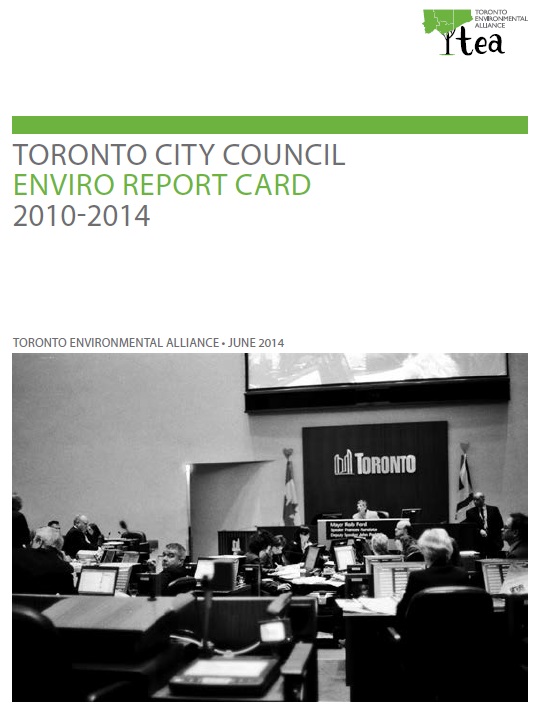 TEA created an Enviro Report Card for City Councillors and the Mayor based on how they voted on 31 crucial issues dealt with by Council between 2010-2014.

See a list of the key votes used for the Report Card here.

After the 2010 municipal election, TEA released a report noting that a majority of elected councillors had committed to building a greener city.

We were right but not in the way we expected.

We hoped the 2010-14 term would lead to significant advancement of 6 priority green actions TEA had outlined as crucial to building a greener city. Sadly, we’ve seen little - if any - advancement in these actions.

Much of the last 4 years has been spent by a slim majority of Councillors defending existing environmental policies and services from cuts or elimination by the Mayor and his supporters: programs such as Community Environment Days, TTC service and tree canopy maintenance.

In rare instances Council was proactive. For example, taking the next steps to grow the Greenbelt into Toronto and calling for an environmental assessment of Line 9.

This report card evaluates Council members on how they voted on key environmental issues.

The results are interesting:

Thankfully, the destroyers lost. We are no worse off today than we were before the 2010 election. But Torontonians deserve better.

Because of 4 years of inaction, Council has lost precious time to deal with the mounting environmental problems facing Toronto.

TEA reviewed City Council meetings starting in January 2011 and identified 31 key votes on issues that had an important impact on the environment.

We gave each Council member one point every time they voted for the environment.

We added up each Council member’s points and divided the total by the number of votes they were present for.

This gave us a percentage which we converted into a letter grade.

Report Card Election Council CITY HALL
Do you like this page?