The TV cameras and bright lights were turned on. The packed room went silent. Then, Olivia Chow and John Tory walked on to the stage, followed by the debate moderator, Burkhard Mausberg, CEO of Ontario’s Friends of the Greenbelt Foundation. 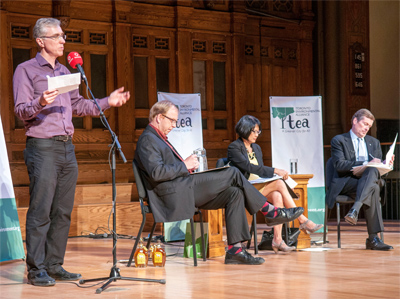 After everyone was seated, I came on to the stage to welcome everyone and to announce that Doug Ford would not be attending.

The feeling in the room was electric. After dozens and dozens of debates, everyone there was expecting to hear something new. For the first time since the debating between candidates started, environmental issues would be front and centre.

I handed over the microphone to Burkhard Mausberg, the moderator. Ninety minutes later, when the debate ended, it was clear both candidates had read TEA’s Green Action Agenda and cared about building A Greener City for All.

The discussion began with a question about what candidates would do to prepare the city for the severe weather events that climate change will bring and ended with a vigorous debate about transit expansion. In between, candidates discussed how they would improve waste diversion rates in the city, reduce toxics and improve Toronto’s air quality.

While there was agreement on moving forward on some actions (eg. planting more trees), there was disagreement on others, especially on how to proceed with transit expansion. 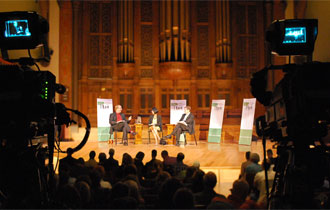 Debates often lead to the question “who won?” We think it was the environment. But, in the end, it’s those who watched in person, or on TV or online who will decide when they vote.

If you missed the debate, and subscribe to Rogers services, you can access it online or watch it when it is re-broadcast over the next few weeks.

A big THANKS to NOW Magazine, our media sponsor for the debate.