On March 7th 2011, TEA released maps comparing how much light rail transit will be built using the original Metrolinx plan and a compromise plan that has been discussed in the media recently. The proposed compromise transit plan, developed behind the closed doors of Mayor Ford and Premier McGuinty’s offices, will deliver half the transit promised in Metrolinx’s so called 5 in 10 plan, for the same $8 Billion cost, unfairly leaving the suburbs out.

The compromise transit plan would use the Province’s funding to needlessly bury the light rail transit planned for Eglinton Avenue from Jane Street to Kennedy station (instead of surfacing at Laird Ave as originally planned) and to replace the old Scarborough RT vehicles with new light rail vehicles. For the same amount of money, the Metrolinx plan would build 52 km light rail transit both above and below ground along Eglinton, Finch Avenue West, Sheppard Avenue East, and would improve and expand the Scarborough RT. 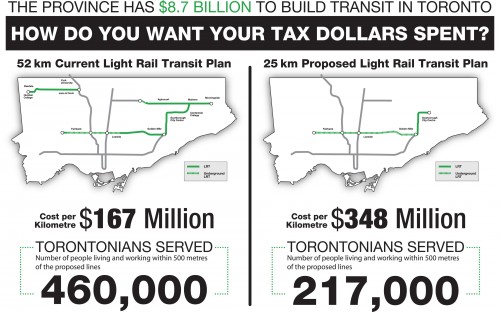 Whatever plan is eventually brought forward Torontonians across the city have been clear that they want to have a say in shaping Toronto’s transit future. Real public consultations on transit expansion are required and must be followed by a vote on these plans at City Council.

Light Rail Transit LRT TTC PUBLIC TRANSIT
Do you like this page?