Toronto is developing a plan to deal with waste for the next 50 years - and we can learn from what happens in other cities.

TEA’s Waste Campaigner, Emily Alfred, recently spoke to Peel Regional Council to urge them to focus on the 3Rs (Reduce, Reuse and Recycle) instead of environmentally wasteful and damaging disposal. The good news is that they agreed! 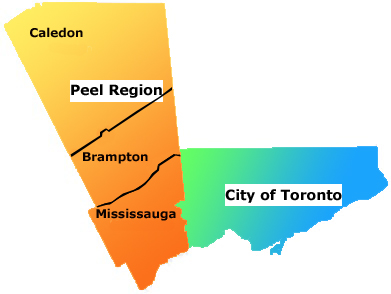 Peel Region is made up of Mississauga, Brampton and Caledon. The Region had been developing a long term waste plan since 2011, and was set to build a costly mega-incinerator and adopt a low goal of only 60% waste diversion (recycling and composting) by 2034.

TEA’s friends at the Peel chapter of the Sierra Club alerted us to the issue. Along with residents, and community groups, TEA spoke to the Council and urged them to reconsider their waste plan.

Emily told Peel Council that, like Toronto, most of Peel's garbage stream going to landfill is actually recyclable or compostable waste. With the right education and support (as we can see at 430 Mayfair on the Green in Scarborough) the diversion rate could be 80 or 90%.

The great news is that we had an impact!

The good news is that after hearing from residents and groups like TEA, Peel Councillors were inspired to revise their plan.

They voted to set a higher waste diversion target of 75% by 2034 and invest in better recycling programs. Peel Council voted to build a new sorting facility for recycling, and a large anaerobic digestion facility to compost more waste.

Some Council members also made it very clear they weren't happy with the incinerator's high cost (nearly $600M, more than twice as much as earlier estimates), the location, or the fact that the incinerator would be so large it would need to truck garbage in from other cities to keep it running 24 hours a day.

Peel Region staff explained that with better recycling and composting, the costly incinerator would be unnecessary. Councillors voted to cancel the incinerator project altogether.

What does this mean for Toronto?

Toronto will soon be facing a similar debate: should we invest in better recycling creating a healthy circular economy, or should we build an incinerator or more landfill?

If we reduce, reuse, and recycle as much as we can, we can avoid the high environmental and financial costs of a new landfill or incinerator.

We know that 85% or more of Toronto’s waste stream is divertable in the blue bin, green bin or other special programs, but we only divert 53% of our waste. We can do better. Recycling creates more good green jobs, saves energy and avoids greenhouse gas emissions.

Let's make sure that Toronto gets it right the first time. Councillors need to hear from residents that we want to focus on the 3Rs - sign and share our petition.

Emily's presentation to the Peel Regional Council on October 8th 2015